Grand Canyon’s esports arena is one of the top collegiate facilities in the country. (File photo by Tanner Puckett/Cronkite News) 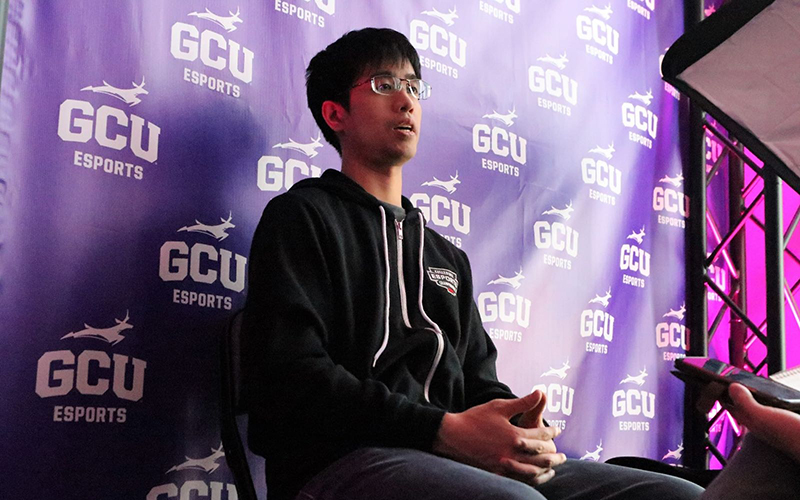 GCU has emerged as one of the premier universities in the country housing esports, offering a diverse set of games in the competitive scene, and being one of the first schools to offer scholarships for players. The program also boasts one of the largest member groups in the nation.

“When esports just started in its conception on the university end, we only had 18 to 24 people,” John Kalua, GCU’s campus technology director said. “We didn’t have any faculty or staff support for esports at the time. That was 2016-2017.

“We went through a process where we hired Albert, built a facility, and put the right components in place on campus. In his first year, we went from 60 to about 500. Here we are in year two and he’s grown the program to over 800. It keeps going up and up.”

The program, established in 2018, started with about 10 members. Sean Shannon, GCU’s League of Legends varsity coach, saw a simple reason for the growth of the program when he joined in early 2020.

“I was aware of how good they were but I didn’t know how backed they were by the university,” Shannon said.

Lee came to Grand Canyon after studying at Georgia Tech, where he was president of esports, as well as Tespa chapter founder and lead. Having the option of taking an engineering job after graduation with his degree in communication and media studies, Lee instead elected to follow his love of esports.

“It is my passion to connect students. It’s not just about video gaming even though that is a huge plus,” Lee said. “It’s about connecting the shared experience and I wanted to pursue that.”

Now, GCU’s esports program is the largest student organization on campus, supporting 124 students across 20 competitive teams, and registering 750 unique students every school year. The program is a major recruiting tool, with 39 percent of incoming freshmen citing the esports program as a reason for enrolling in the university, Lee said.

“I came into the role to help lead the initiative because right now in the collegiate esports space it’s very much open ended,” Lee said. “What I like to say is it’s the wild west right now. It’s comparable to the early days of American football when there were no rules or regulations. We’re on the brink of something big here. There was no bar set, it was more of seeing where we can take this. At the end of the day, if more and more students are happy with their time here, that’s the best we can see here.”

The biggest draw for GCU’s esports program is its large esports arena, outfitted with more than 70 gaming PCs, along with a space for console players and a lounge to watch tournaments and study game play. In addition, a stage with gaming setups is available for competitive teams when playing tournaments.

The arena went through renovations and reopened in late 2019. Despite the renovations, the continued membership of current and prospective students will require the program to expand once again soon.

“We also have a capacity limit in our facility that can manage so many club members and it’ll get to that point where our success stories and club membership will usually lead to building more facilities,” Kuala said. “We’re going to max out our capacity real quick.”

With the success of the GCU’s esports program, Lee hopes it can be a shining example for other colleges that are looking to create similar programs and allocate resources.

“If schools want to view it as important, then it’s as important as their focus on recruitment for the future,” Lee said. “Esports is definitely only going to rise in popularity. The younger generations got smartphones, they all have consoles and PCs. Everything has become so intertwined online that if you’re not committing resources to at least researching into esports or engaging your students who are already using technology, you’re missing out on a large chunk of what could be the next recruiting bubble.”

The growth of esports is evident, with more than $1 billion in market revenue in 2019, Forbes reported. In 2019, there were 253 million occasional viewers and 201 million frequent viewers watching their favorite games around the world.

During these trying times with the new coronavirus, gaming is becoming an outlet for those who are staying inside. It presents a unique opportunity for the esports community.

“I think we’re seeing it across the nation,” Shannon said. “We’re seeing professional basketball players, NASCAR and FIFA players who are playing online tournaments on Twitch. I think it’s cool because it not only validates the job hemisphere but it validates the kids who are just doing it as a hobby or seeing if they want to do it in the future.”

In a matter of years, Lee brought success to GCU esports in all facets. GCU also continues to grow membership and holds tournaments for local high school players who can earn small scholarships.

Competitively, GCU esports offers scholarships for players on both varsity teams for “Overwatch” and “League of Legends.” In 2018, GCU earned a spot in the quarterfinals of the 2019 “Overwatch Collegiate Championship.”

It’s one of the most efficient and university-backed programs in all of collegiate esports, but Lee said he will continue to build GCU esports.

“Right now, we’ve been established as one of the pioneers in Arizona and the West Coast in terms of esports programs,” Lee said. “Our commitment for the future is to ensure that we uphold that. We want to be a forerunner, that campus driving forward what esports can be at the collegiate level.”