Officials erected fences around the state Capitol complex last week after demonstrators, some armed, showed up to protest the certification of President-elect Joe Biden’s win. That protest came the same day that a demonstration in Washington turned deadly, as a mob of Trump supporters stormed the U.S. Capitol. (Photo by Jeff Rosenfield/Cronkite News) 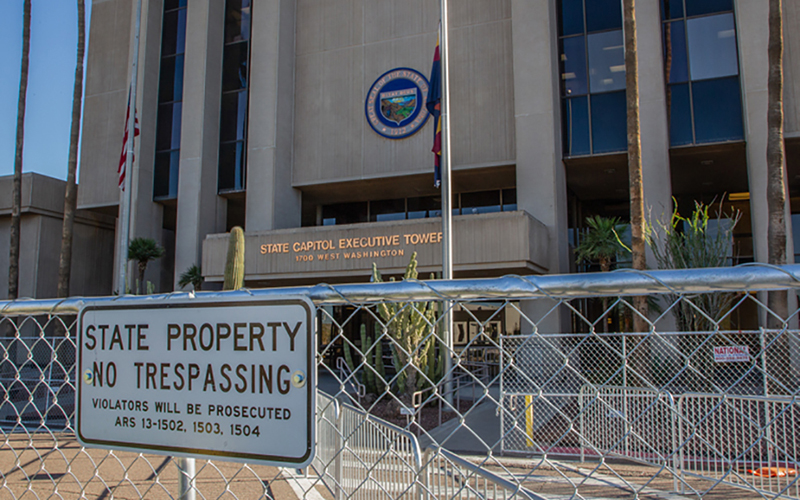 The FBI’s Phoenix office “has not received any specific and substantiated threat to the Arizona state capitol or other government buildings,” but said it’s working closely with state and local police. State capitals across the U.S. are on high alert after the FBI warned of possible armed protests against President-elect Joe Biden’s inauguration next week. (Photo by Jeff Rosenfield/Cronkite News)

WASHINGTON – The Arizona Capitol is surrounded by two rows of chain-link fence and police presence has been increased, as authorities brace for possible violence in response to the inauguration next week of President-elect Joe Biden.

The preparations come amid reports that the FBI has warned of possible armed protests at all 50 state capitals next week, on the heels of the violent mob that breached the U.S. Capitol as Congress was certifying the election of Biden. Five people died in that attack, including a Capitol Police officer.

The FBI Phoenix office said Thursday that it “has not received any specific and substantiated threat to the Arizona state capitol or other government buildings,” but that it is working with state and local authorities to track security concerns.

Arizona Department of Public Safety spokesperson Bart Graves said in an email this week that the fences were installed around the Capitol complex “out of an abundance of caution” on Jan. 7, the day after the assault on the U.S. Capitol. Protesters also surrounded the state Capitol for hours the same day the U.S. Capitol was stormed, with some of the crowd in Arizona armed, according to news reports.

Graves said that, in addition to the fence, “security procedures at the State Capitol were previously enhanced, not for one event, but to ensure the safety of the public” and that the situation is being monitored. But he declined to elaborate on those other measures for security reasons. 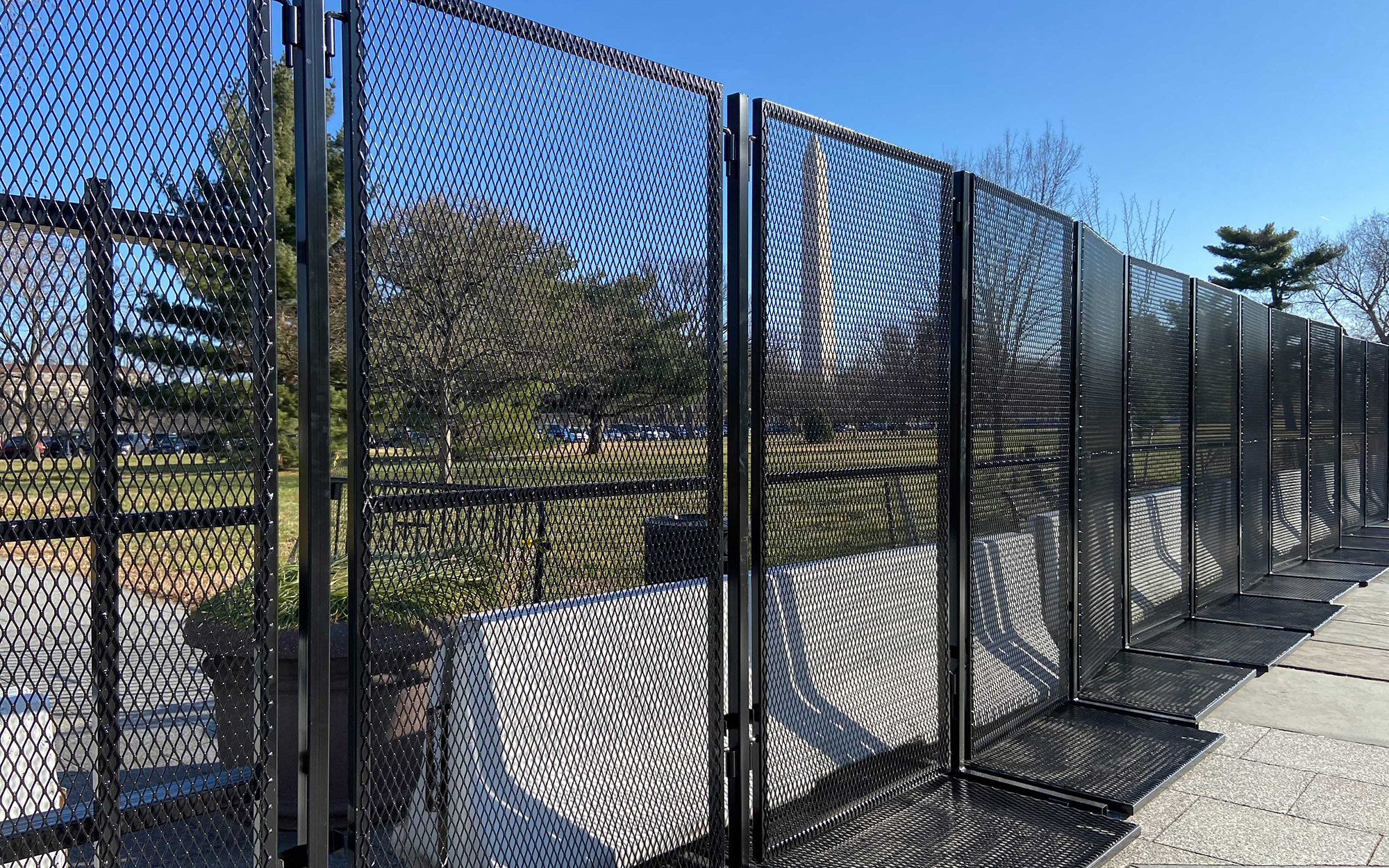 While lawmakers welcomed the extra security, some worried that more may need to be done in light of the violence seen last week in Washington.

“What we saw in Washington, it really changed our perception of what could happen in the United States,” Arizona House Minority Whip Domingo DeGrazia said Thursday.

Last week’s protest at the state Capitol was the latest in a year of protest in Arizona and across the nation.

Fences outfitted with razor-wire were placed around the Capitol last summer, in response to protests following the police killings of George Floyd and Dion Johnson. And Trump supporters mobbed the Capitol and other state offices in November and December to protest the election that ousted the president.

House Minority Leader Reginald Bolding Jr. said he asked for a briefing for the legislative session that started Monday, on how law enforcement officials had responded to the election protests.

“I learned we had made upgrades in the security systems, but I think there still needs to be more” to ensure that the violence in Washington is not repeated as Inauguration Day approaches, Bolding said.

Calls seeking comment on the security measures from majority leaders in the state House and Senate were not immediately returned.

Brian Gerber, co-director at the Center for Emergency Management and Homeland Security at Arizona State University, said measures taken at the state Capitol appear to be a “reasonable precaution” in a time when “we have seen incursions into state capitols” to protest COVID-19 shutdowns, for example. 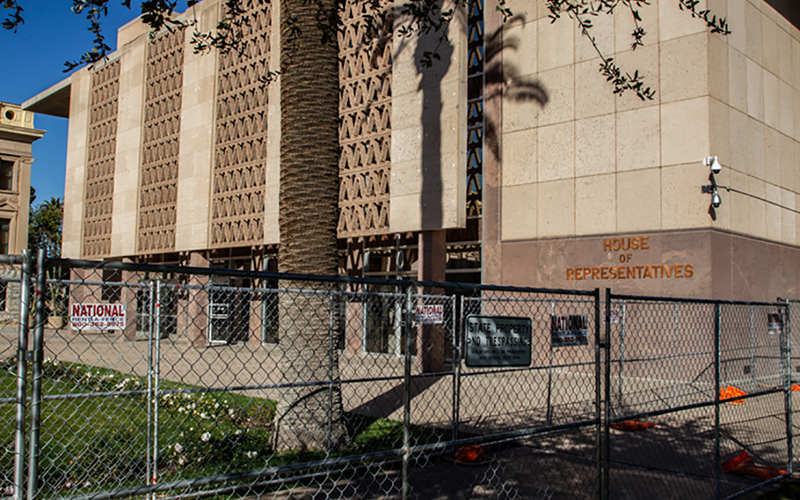 Besides the addition of fencing, the police presence around the Capitol complex has been beefed up in advance of Inauguration Day and the governor’s office said the National Guard can be deployed if violence erupts. But some House members worry that more needs to be done. (Photo by Jeff Rosenfield/Cronkite News)

“The implied threat when armed protesters go in to disrupt state government business is an unacceptable level of possible violence,” Gerber said of assaults last year on other state capitols.

More worrisome, he said, was the fact that some of those cited in the attack on the U.S. Capitol were police officers from other jurisdictions. “It’s disturbing to think they would betray an oath of public service and make a conscious choice to take part in illegal activities,” Gerber said.

C.J. Karamargin, a spokesperson for Gov. Doug Ducey, said in an email that “the presence of the Arizona Department of Public Safety State Troopers has been increased” at the state Capitol, but did not give numbers. Karamargin also said the “Arizona National Guard will be utilized if necessary.”

“If DPS determines a heightened level of security is warranted, state employees will be advised to work from home,” Karamargin said in an email Wednesday.

DeGrazia said he was disappointed that the Legislature has not shifted more to virtual operations for safety reasons.

“In the context of COVID-19, we should have the ability to conduct our business virtually with the input of our constituents,” said DeGrazia, who thinks distance operations would help reduce physical threats to the Legislature.