President Donald Trump in Texas celebrating the completion of 450 miles of border wall Tuesday – one day before he was impeached by the House for inciting an insurrection in connection with the Jan. 6 storming of the Capitol that left five dead. Trump is now the only president to be impeached twice. (Photo by Shealah Craighead/The White House)

WASHINGTON – No Arizona lawmakers broke party ranks as the House Wednesday impeached President Donald Trump on a mostly party-line vote, just one week after a deadly mob attack on the Capitol that critics said was incited by the president.

The 232-197 vote also comes 13 months after Trump was first impeached by the House, making him the only president in U.S. history to be impeached twice. Unlike the earlier vote, however, 10 Republicans joined all Democrats Wednesday to impeach.

But all four Arizona GOP lawmakers stood by Trump, who leaves office in a week. And the articles of impeachment still must be heard by the Senate, which is not expected to take them up until after President-elect Joe Biden is sworn in to replace Trump Jan. 20.

“This … sets a dangerous precedent for our nation,” said Rep. Debbie Lesko, R-Peoria. “If Congress is going to impeach a president, it must … only be done after intense debate and deliberation, not rushed through at the 11th hour to make a political point.”

Republicans accused House Democrats of pursuing an impeachment that will have little practical effect except to satisfy a vendetta they have harbored since Trump took office. But Democrats said Trump’s incitement of an insurrection cannot be ignored.

“Donald Trump is not just incompetent. He’s not just corrupt. He’s downright dangerous and should never be allowed to hold public office again,” Rep. Ruben Gallego, D-Phoenix, said in a statement after the vote. “That’s why we are voting to impeach him.” 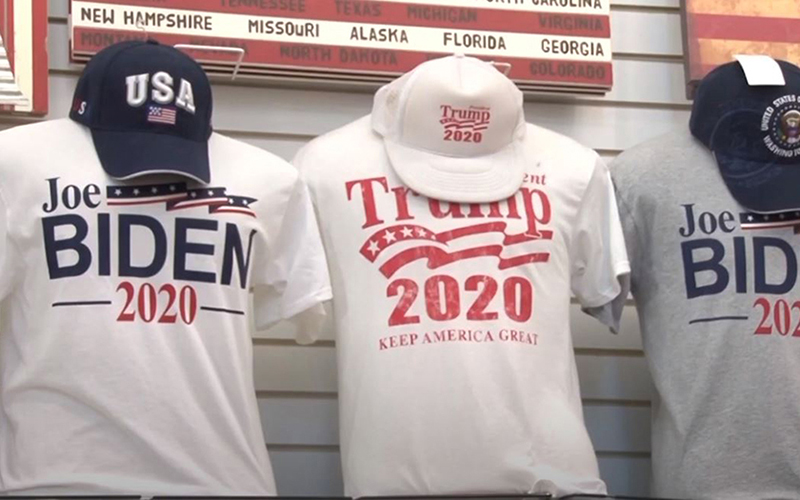 The impeachment resolution said the pro-Trump crowd that stormed the Capitol on Jan. 6, as Congress was certifying the results of the presidential election, was motivated by Trump’s repeated false claims that the election was stolen. It said that at a rally that day, he “willfully made statements that, in context, encouraged – and foreseeably resulted in – lawless action at the Capitol” that included “violent, deadly, destructive and seditious acts” during an hours-long assault in which five people, including a Capitol Police officer, died.

The resolution also said the president “endangered the security of the United States and its institutions of government, threatened the integrity of the democratic system, interfered with the peaceful transition of power, and imperiled a coequal branch of the government.”

The White House did not respond to a request for comment on Wednesday’s vote. But in remarks to reporters Tuesday, Trump called the impeachment “a continuation of the greatest witch hunt in the history of politics. It’s ridiculous.”

Trump has insisted in recent days that his actions on Jan. 6 were “totally appropriate” and he has repeatedly issued statements calling for nonviolence by his followers. The most recent came Wednesday, when he cited reports of possible violent protests around the country as Inauguration Day approaches, telling supporters “there must be NO violence, NO lawbreaking and NO vandalism of any kind.”

The 2019 impeachment charged Trump with abuse of power and obstruction of Congress for his apparent attempt to coerce the president of Ukraine to find incriminating information on Biden. It passed the House by an almost identical vote to Wednesday’s impeachment resolution, but died in the Senate last January.

The new article of impeachment now heads to a Senate that is no longer controlled by Republicans. Even though several GOP senators have indicated they would vote for impeachment, however, Democrats are still well shy of the two-thirds majority needed to convict.

And Senate Majority Leader Mitch McConnell said Wednesday that the Senate, which is currently on recess, will not be able to consider the issue until after Trump has left office.

“Given the rules, procedures, and Senate precedents that govern presidential impeachment trials, there is simply no chance that a fair or serious trial could conclude before President-elect Biden is sworn in next week,” McConnell said in a tweet after the House vote. 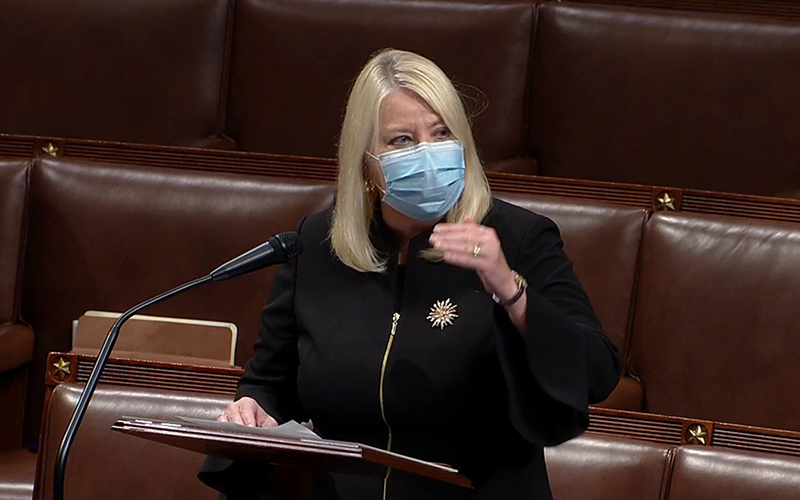 Rep. Debbie Lesko, R-Peoria, like many Republicans in the House, criticized the timing of the impeachment, noting that President Donald Trump will have left office before the Senate can take up the issue. But Democrats – and some Republicans – said Trump’s part in an assault on the Capitol demanded action. (Photo courtesy Clerk of the House)

Arizona Sens. Kyrsten Sinema and Mark Kelly, both Democrats, did not respond to requests for comment Wednesday on the impeachment.

Like many House Republicans, Rep. Andy Biggs, R-Gilbert, pointed to the timing of the House vote and the unlikely possibility that the Senate will agree as proof that Democrats were only interested in political gain.

“The thirst for Trump’s destruction will not be slaked, however, even if you’re successful today and were the Senate to convict President Trump, yours will be a pyrrhic victory. For instead of stopping the Trump train, his movement will grow stronger,” Biggs said on the House floor.

Democrats rejected the charge, saying the vote was about protecting the U.S. government and holding Trump accountable for his actions.

“President Trump is a clear and present danger to this country and must face consequences for his actions,” said Rep. Grijalva, D-Tucson, in a statement Wednesday evening. “I will vote to impeach Trump for a second time because calls of ‘unity’ will not stop the treacherous situations Trump continues to encourage.”

Biggs warned that the move will backfire on Trump’s critics, tweeting Wednesday that their “shameful, reckless, and partisan quest to obliterate their nemesis, Donald J. Trump, will only serve to make him a political martyr.”

But Rep. Greg Stanton, D-Phoenix, said lawmakers have a responsibility to act in defense of the Constitution.

“We don’t yet know if the President will face criminal charges, but we know that he must be held to account,” Stanton said in a release Wednesday afternoon. “Each one of us in this House took an oath to protect and defend our Constitution, against all enemies, foreign and domestic – even if that enemy is the President.”