WASHINGTON – For two months since the election, President Donald Trump has challenged the election of President-elect Joe Biden, but there is no question that in some parts of Washington it will soon be time for Trump to go.

The Trump key chains, that is. And Trump mugs. And T-shirts and posters and finger puppets and bottle openers and other souvenirs that have been staples in souvenir shops for the past four years but are now being moved to the clearance shelf.

“It sold well. I mean Trump was a hot commodity,” said Dexter Morse, who manages the Washington Welcome Center, a tourist stop and souvenir shop just blocks from the Trump International Hotel.

But that was before the election.

Despite ballot recounts, lawsuits and election challenges, despite congressional threats to delay the Electoral College count this week, gift shops were already starting to stock shelves with Biden swag in November. DeJa Prophet, who has been working at the Washington Welcome Center for a few years, said the store was already clearing space for Biden and Vice President-elect Kamala Harris just a couple days after the election.

“About a week and a half later, we started getting in more merch,” Prophet said. “We have all of the T-shirts, sweatshirts hats and keychains – everything is now Biden-Harris.”

Morse has seen a number of post-election store “makeovers” in his 15 years at the shop. This year has been pretty much typical, he said.

“When Trump became president, we were bombarded with his stuff and now, we are getting all of the Joe Biden and Kamala Harris stuff,” Morse said.

What’s unusual about this transition is the prominence of Harris, he said. While the store always gets T-shirts, mugs, hats and posters with the president’s face, Morse said the new wrinkle this year is the line of products devoted to Harris.

“I mean we’ve had other vice presidents, but not like her where we have stuff specifically made for her,” Morse said. “That’s pretty rare.” 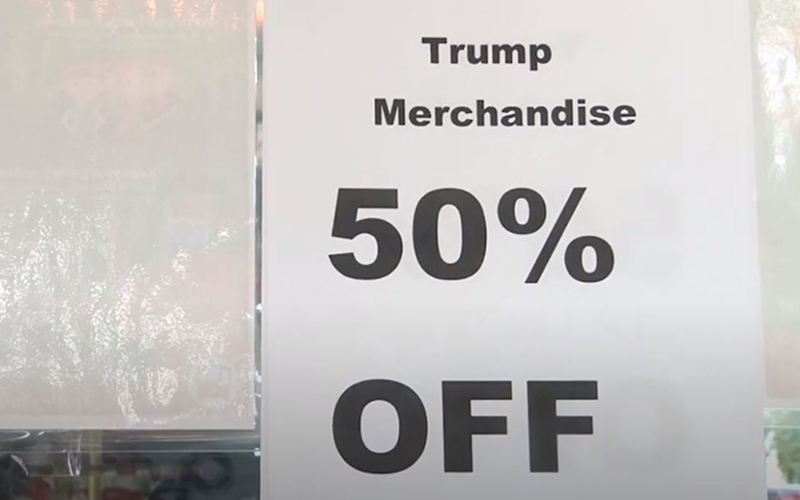 Trump merchandise – from hats and T-shirts to bottle openers and finger puppets – “flew off the shelves” when he was in office, one gift shop worker said, but were marked down soon after the election. (Photo by Tina Giuliano/Cronkite News)

Gift shops like the Washington Welcome Center will still have Trump life-size cutouts and “Make America Great Again” T-shirts. But Trump fans will have to look a little harder, as they are being placed on clearance or moved down a shelf.

And it may not just be the supporters who are looking. Prophet said that during the many protests and rallies that descended on Washington last year, shoppers would come on the hunt for gear to show their support for – or criticism of – the president.

“It was more like, ‘Oh, let’s get this hat and write something on it for protests,'” Prophet said.

During Trump’s administration, Prophet said the store sold a lot of small, joke gifts that both supporters and non-supporters picked up.

“Whether … they are actually supporters or against him, they still buy Trump things because when he was president, we had stuff that was pure Trump,” she said. “But we also had little knick-knacks that were funny that people thought were jokes.”

While 2020’s protests helped business, the COVID-19 pandemic has not. Morse said the coronavirus helped empty what was once a crowded store. The shop closed for four months at one point, reopening just in time for Fourth of July sales.

“We haven’t been back to normal since March,” he said.

Prophet said right now, the two administrations occupy the stores’ shelves, but after inauguration on Jan. 20, the Trump items will be gone. But not forgotten.

Concettina Giuliano expects to graduate in spring 2021 with a bachelor’s degree in journalism and a minor in Spanish. Giuliano has worked at several television stations and newspapers, including AZFamily, the Arizona Republic and the Chautauquan Daily, and her work has been featured on Telemundo. She is working on her bilingual reporting for Cronkite News.