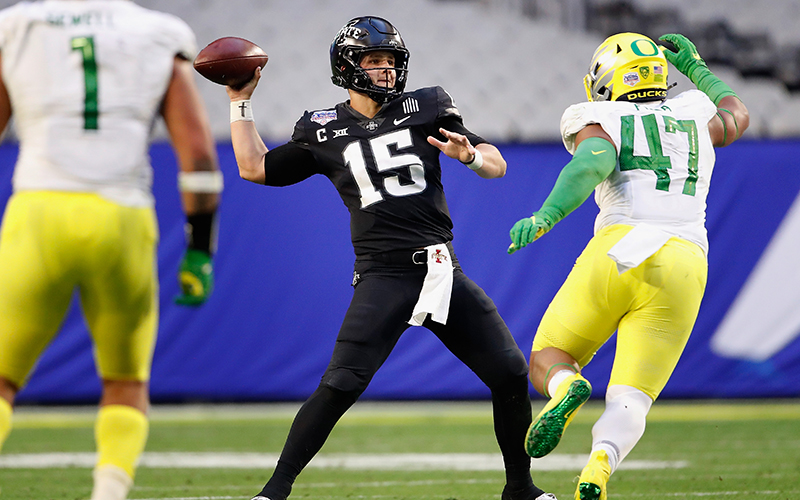 There weren’t many fans in the stands for the Fiesta Bowl, but the family and friends of Iowa State quarterback Brock Purdy were there in force. Purdy, who was named offensive MVP of the game, starred at Perry High in Gilbert. (Photo by Christian Petersen/Getty Images) 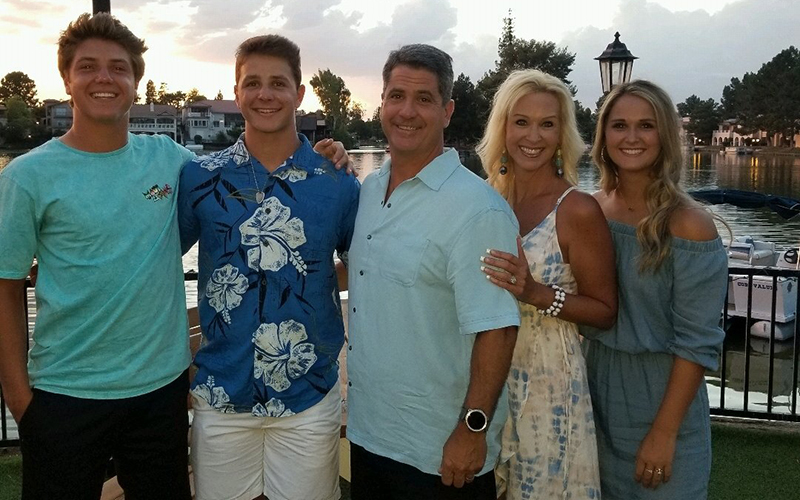 Chubba Purdy, left, poses with his older brother, Brock, and the rest of their family while in the Valley for the Fiesta Bowl. Brock Purdy led Iowa State to a 34-17 victory over Oregon. (Photo courtesy of the Purdy family)

GLENDALE – The COVID-19 pandemic has changed the landscape of college football, including postseason bowl games. Although few fans were allowed to attend the Fiesta Bowl, it didn’t spoil the experience for a certain Florida State quarterback in the stands.

Seminoles freshman Preston “Chubba” Purdy was at State Farm Stadium on Saturday to watch his brother, Iowa State quarterback Brock, lead the Cyclones to a 34-17 victory over Oregon.

“Watching Brock win the Fiesta Bowl and win MVP was such a surreal moment,” he told Cronkite News. “I knew how much it meant for him, so I was so happy for him for the whole time.”

Chubba Purdy started a game for Florida State in November before surgery to address a collarbone issue sidelined him for the rest of the season.

Like his older brother, he was a standout at Perry High School in Gilbert, throwing for more than 6,800 yards and 69 touchdowns. Chubba said he always learns something from Brock, who was named offensive player of the Fiesta Bowl.

“Watching my brother play the game of football helps me a lot,” he said. “I learn from him in the way he plays and watch how calm he is during the game.”

About 2,000 fans – socially distanced and sitting on opposite sides of the stadium – were in attendance. Cardboard cutouts of PlayStation characters filled each end zone, a nod to the game’s sponsor.

Although it was not a full house, it did not take away from the experience for Brock Purdy, who had the opportunity to square off with longtime friend and training partner, Oregon quarterback Tyler Shough, who attended Chandler’s Hamilton High School.

“It was special, for sure being at home. It was like nothing I’ve ever experienced before,” Brock said. 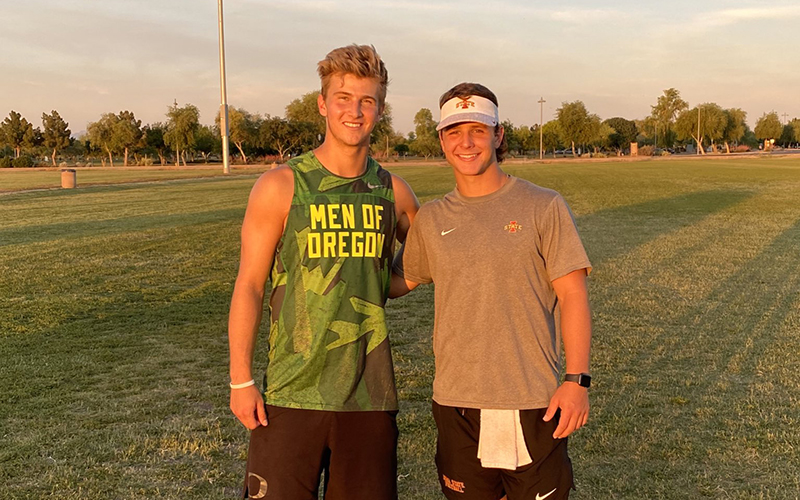 Purdy provided plenty to cheer about, throwing for 156 yards and a touchdown and adding another on the ground.

Although the atmosphere inside State Farm Stadium was, as Chubba Purdy described it, “different and unique,” it was a special day for his family members.

Shough’s experience was quite different.

He was unable to find a rhythm on Saturday, as he was pulled from the game after three passes and replaced by Anthony Brown. He did return during the second half, but in rotation with Brown.

Shough had no comment about being pulled but did say losing in his hometown did not sit right with him.

“You’re always going to be disappointed when you lose, and especially when you come back home,” he said. “A lot of people came out to watch. I’m definitely sorry for them. But it is what it is when you lose a football game.”

What’s next at the position suggests uncertainty because both quarterbacks played. Additionally, more quarterbacks are coming to Eugene next year, including Ty Thompson of Mesquite High in Gilbert.

“After a game like this, with all of the things going on with the seniors and the team and the things we have to attend to, we’ll sit down and evaluate everything,” Oregon coach Mario Cristobal said of the Ducks’ quarterback situation. “But Tyler came in this year as a starter, and he started this game as well. He did a lot of good things out there. We have tremendous confidence in him, and we’re excited about Anthony as well.”