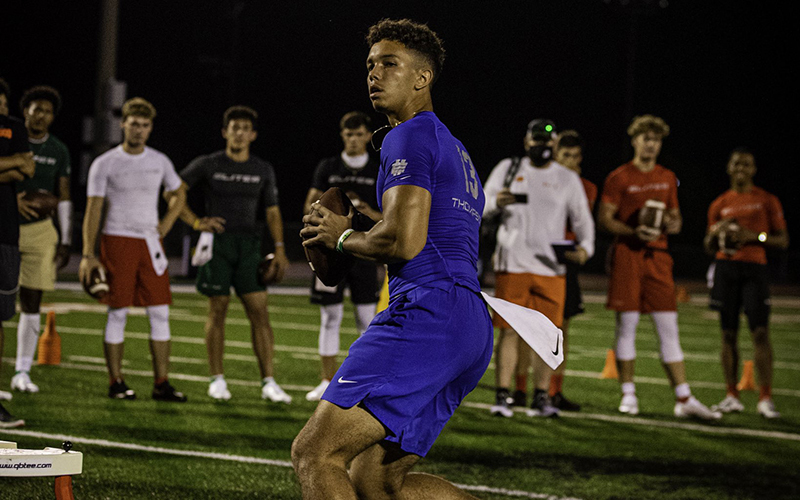 A strong work ethic has helped Ty Thompson emerge as one of the top high school quarterbacks in Arizona. (Photo courtesy Elite 11)

PHOENIX – Loyalty matters to Ty Thompson. No one is more grateful than the Mesquite High School Wildcats, who find themselves two victories away from the 4A state title.

The 6-foot-4 quarterback is a big reason. He is the top player at his position in Arizona’s 2021 class, known for his ability to throw and run and making him the No. 2 dual-threat on Rivals.com.

“There has been an opportunity for me to leave Mesquite High School and go play somewhere that is ‘bigger and has more talent’ but I am a loyal person and loyal to Mesquite,” Thompson said.

Thompson has started full time at Mesquite since his sophomore year, racking up 9,291 passing yards, 996 rushing yards and 94 touchdowns in 32 games that he has played.

He not only has had a good statistical career in high school but led his team to a 4A state championship last year. Mesquite is in the semifinals where the Wildcats will take on American Leadership Queen Creek Friday night in its fight for back-to-back state titles.

“He put Mesquite on the map with a lot of people asking about our program and school due to what he has done,” second-year Mesquite coach Scott Hare said. “He is an inspiration to a lot of people in what he does and how he does it. Thompson is the role model that parents should want their kids to look up to him”

Many label him as a quarterback with a good frame, solid athleticism, great instincts and polished play. Sports Illustrated named him an All-American candidate and praised him for his versatility:

“Thompson has the makeup of a talented spread field general but shines brightest while operating from a strong base in the pocket. He is accurate to all three levels with enough movement skills to keep a defense honest and/or to extend the play. As he works to get through progressions more efficiently, can blossom into a multi-year college starter.” 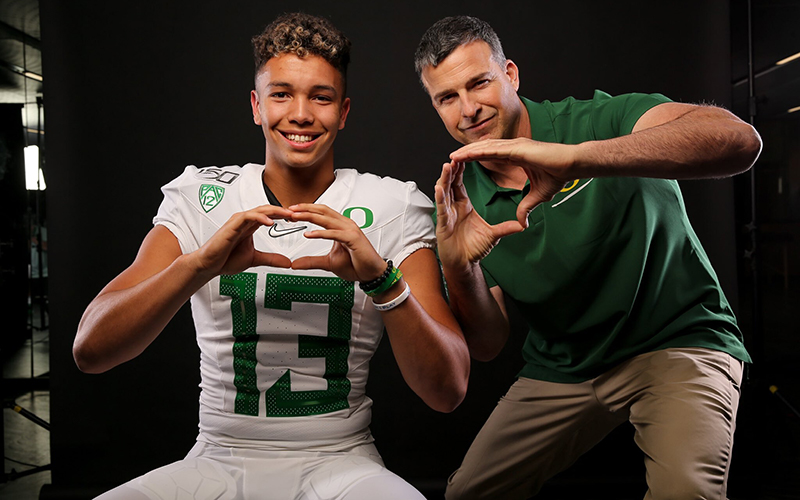 When it comes to his own evaluation, he would say he is an “athletic, but not a run-first guy” who likes to stay in the pocket and make throws with his above-average arm with his ability to read defenses but most importantly “always the hardest worker on the team and always will plan to be.”

“People will say, ‘If I was 6-4 220, I could do what he is doing’ but in reality, they wouldn’t be willing to put in the hard work that he does,” Hare said. “He spends a lot of his time wanting to be successful, I mean there are so many people that are given gifts but don’t really grow those gifts. That’s not Ty he has been given gifts but also taken time to grow them.”

Thompson started playing football at the age of 5 before changing to tackle football at 11. His athleticism led him to play multiple sports.

Ultimately, it was his decision to stick to football and started as a wide receiver in flag football, where he was coached by former Nebraska quarterback Bobby Newcombe. His switch to quarterback happened in middle school where it became clear that he was a dual-threat because of his athletic abilities.

His dad, Dirk Thompson, attributes his success not only to his skills but to the knowledge of his coaches. In addition to teaching Thompson the position, they helped him become a leader.

“So many people have guided him up to this point,” Dirk Thompson said in an interview with AZPreps365. “It was all these parts that came together. It’s moved him in the direction that he’s gone now.”

Thompson has received attention nationally. He was named an Adidas All-American and was selected as an Elite 11 quarterback. Also, he was invited to the 2021 All-American Bowl but it was canceled due to COVID-19.

He received attention from multiple colleges, garnering 18 offers from Miami, Wisconsin, Arizona State and many others. His ultimate decision for him was easy as he committed to the University of Oregon in the spring.

“I visited in early March and fell in love with the coaches and the program as a whole,” Thompson said. “They produce a lot of NFL talent and won the Pac-12 last year, but the culture that they create, with coaches and everyone who is with the team, is like nothing I have ever seen, and just the feeling I got when I walked in there was like I was at home.”

His loyalty to Oregon should be no surprise as he is often described as a loyal person both in athletics and off the field.

He is also called smart, especially at math, a family guy, someone who loves “the grind,” especially with his affection for workouts, and a player quiet off the field but loud on it.

“He is a great young man that does the right things and positions himself to everyday be the best person he can be,” Hare said.

Academics are at the forefront of his life and he excels at Mesquite with a 4.3 GPA, a reflection of being raised to care about books before football. Thompson plans to pursue a degree in business at Oregon.

Before he is off to Eugene, he hopes to complete his main goal this year: win another title.

He is just two victories away.