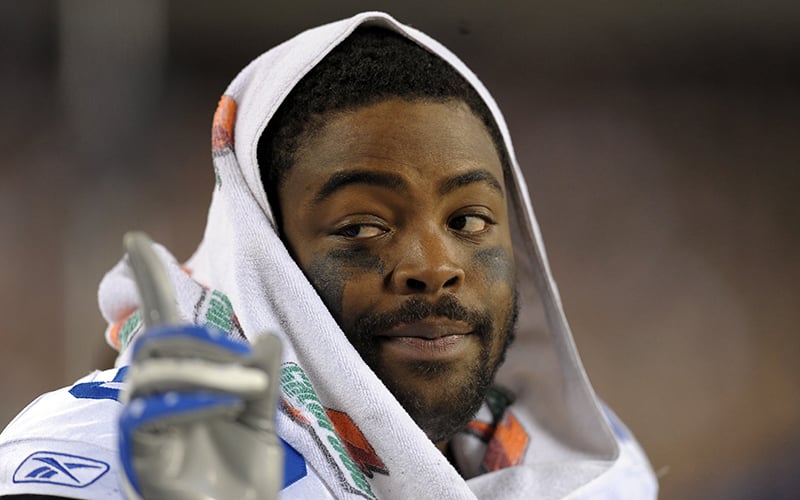 Defensive tackle Terry “Tank” Johnson was drafted by the Bears in 2004 and later played for the Cowboys and Bengals. (Photo by Drew Hallowell/Getty Images)

LOS ANGELES – Being locked up was supposed to be a punishment for Terry “Tank” Johnson. It also turned out to be an awakening.

In the early 2000s, the product of Tempe McClintock High and the University of Washington was basking in the spotlight of football success – playing seven NFL seasons with Chicago, Dallas and Cincinnati – but he was leading a double life. In 2007, while the Bears were getting ready to play in Super Bowl XLI, Johnson was navigating the criminal justice system.

As a young man looking to have fun, Johnson said, he put himself in “uncontrolled environments,” including his November 2005 arrest in a Chicago nightclub for unlawful possession of a handgun. He was convicted and given probation.

But there were subsequent brushes with the law, including illegal possession of weapons and drugs, culminating in a March 2007 court order remanding him to 120 days behind bars for violating the terms of his probation.

He languished at first, frustrated by his bad choices. He went to the Cowboys and then the Bengals, but his football career was essentially over. But because of what he witnessed during incarceration, Johnson turned that disappointment into motivation, and he now finds himself a key figure in a renewed debate about the role of private for-profit prisons.

“I think the main thing is just getting people to be aware of the injustice,” Johnson, now 39, told Cronkite News. “We often use the analogy of pushing a rock up the hill to get people to understand what we’re dealing with here.”

Those four months behind bars inspired Johnson to become involved with Abolish Private Prisons, an Arizona 501-c nonprofit that was founded in 2015 to end for-profit prisons in the United States. In June, the organization filed a lawsuit on behalf of five inmates and the NAACP in U.S. District Court in Phoenix “to challenge the constitutionality of prison privatization,” John Dacey, the executive director of Abolish Private Prisons, told Cronkite News.

Among its claims, the lawsuit filed against the director of Arizona Department of Corrections, Rehabilitation and Reentry contends Arizona is practicing slavery when it sends inmates to private prisons because those facilities treat “incarcerated citizens as cash-cow stock.” The suit seeks an injunction to end prison privatization because it pits corporate profits against individual freedom and therefore is unconstitutional, Dacey said.

Twenty-eight states have at least one private, for-profit prison. Arizona, however, has six, and they house about 19% of the state’s inmates, according to the Department of Corrections. As of Nov. 1, 7,370 inmates were held in private facilities out of the overall state prison population of 38,495.

Although the U.S. Department of Justice issued a report in 2016 that said private prisons are more dangerous for inmates than those run by the government, the Trump administration said in 2018 that it hoped to expand their use. President-elect Joe Biden frequently said during his campaigns that he would work to abolish private prisons.

Prison privatization supporters contend it saves the government money, prevents overcrowding and creates jobs. Opponents point to a for-profit model that lacks transparency, is motivated to keep prisoners longer and gravitates toward cost-cutting that reduces the quality and number of employees, and limits such inmate services as education and health care.

In Johnson’s mind, privatization is a bad idea, and it motivated him to raise awareness.

A love of football

For many years, Johnson’s greatest motivation was sports. He grew up in Tempe and graduated from McClintock High in 2000, where he was a three-sport athlete and a two-time all-city and all-region honoree in football. He went on to further success at Washington, where he started on the defensive line his junior and senior seasons.

“He was such a gregarious guy,” recalled Rick Neuheisel, Johnson’s head coach at Washington. “If you were in the locker room, he was everybody’s friend.”

Johnson’s play – he led the Huskies in tackles for loss his senior season – earned him the attention of the NFL. He was drafted by the Chicago Bears in 2004, and like many NFL rookies, found himself in an unfamiliar, eclectic world that most people will never experience.

“When you’re young and you want to go out, you want to have a good time,” Johnson said. “When you enter things, like, big parties, nightclubs and things like that. It’s an uncontrolled environment, and you can’t control what everyone around you is going to do.”

In March 2007, Johnson was ordered to serve 120 days in jail for violating probation on the 2005 gun charge. A few weeks after his release, he was arrested for speeding and suspected drunken driving. The Bears let him go after the report.

Like many states, Arizona began looking at for-profit incarceration in the early 1990s, when prison overcrowding became a pressing issue. The state’s first was the Marana Community Correctional Treatment Facility, a minimum-security unit north of Tucson that housed inmates with substance abuse problems.

In 2003, overcrowding became such a concern that lawmakers voted to add 2,000 prison beds. Although then-Gov. Janet Napolitano did not support prison privatization, the Arizona Republic reported, she compromised with the Legislature to divide those 2,000 beds equally between public and private prisons.

As word of the state’s embrace of private prisons spread, other states began sending its prisoners to Arizona.

At the end of the Great Recession in 2009, when Arizona led the country in budget shortfall as a percentage of total spending, legislators explored the idea of privatizing all but one of the state’s correctional facilities, saving an estimated $100 million, but the bill failed despite the strong support of then-Gov. Jan Brewer.

The June lawsuit by Abolish Private Prisons and the NAACP put the issue back in the forefront.

“The plaintiffs have it entirely backwards,” Alexandra Wilkes, the national spokesperson for the Day 1 Alliance, a trade association representing private contractors, said in a statement to Cronkite News. “The reason governments first began utilizing public-private partnerships in the 1980s was to address unsafe and unconstitutional conditions in the public correctional system – including severe prison overcrowding and aging facilities that were endangering the lives of incarcerated men and women.”

Although the five plaintiffs in the suit are white, the NAACP’s involvement reflects its longtime concern that the criminal justice system has a great effect on people of color. More than 59% of the inmate population is Black, Hispanic or Native American, according to an October report released by the Department of Corrections. 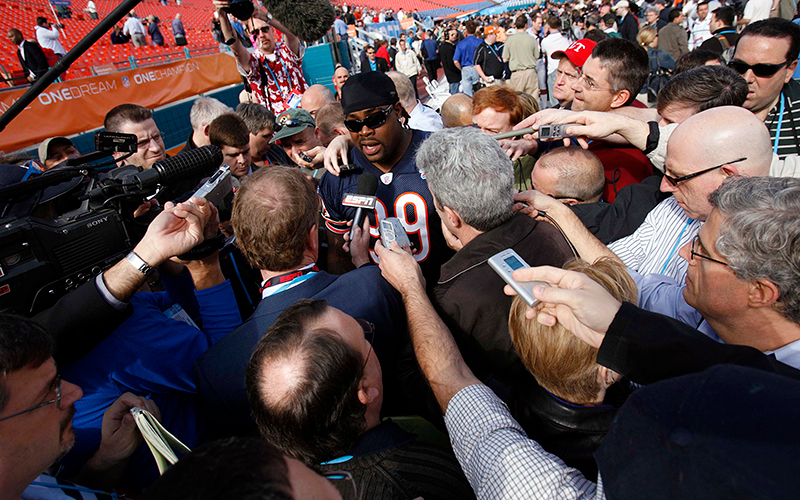 Tank Johnson, like many young NFL talents, was the center of attention almost everywhere he went, giving him little room for error. (Photo by Jim Prisching/Chicago Tribune/Tribune News Service via Getty Images)

After Johnson’s NFL retirement in 2011, he started a counseling program called Moving the Chain, which aims to help ex-offenders move past their mistakes and control the situations and influences around them.

Johnson’s involvement with Abolish Private Prisons is being supported by Inspire Change, the NFL’s social justice initiative. In the past two years, it has awarded $44 million in grants to current and former NFL players who are involved in such areas as police-community relations, criminal justice reform, and education and economic advancement.

Dacey and Johnson were particularly motivated by the reality of how the war on drugs greatly affected immigrants and people of color, often leading them into the private prison system.

“From the legal perspective, our view is that crime and punishment, and the incarceration function, are core government responsibilities,” Dacey said. “And it’s not the business of the private sector. And putting a significant profit incentive in criminal justice, directly in conflict with personal liberty, we think is not just a horrible idea, we think it violates the Constitution.”

At its core, the practice of private profits for imprisonment means rehabilitation can become an afterthought.

“And in a profit-making criminal justice system, each prisoner becomes a unit of profit, or human inventory,” Dacey said.