Home on the road: COVID-19 closures mean Lakers fans will travel to see the champs play 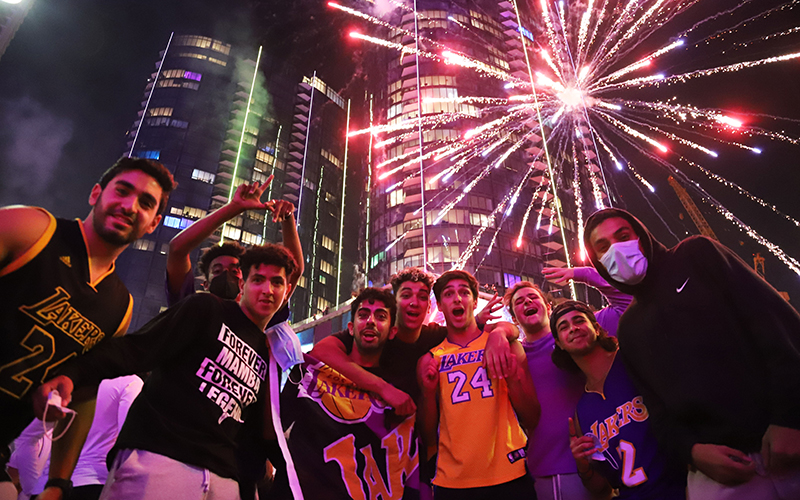 Lakers fans gathered outside Staples Center after Los Angeles beat the Miami Heat in Game 6 of the NBA Finals on Oct. 11. (Photo courtesy of Daniel Makar)

LOS ANGELES – After the Lakers won their first NBA championship in 10 years, LA fans defied pandemic warnings to rampage through the streets in celebration, leading to vandalism and dozens of arrests.

But when the NBA season tips off Dec. 22, Lakers fans won’t be able to watch the defending world champions play at Staples Center – which has been closed to fans in response to an alarming rise in COVID-19 cases in Los Angeles County.

In response, the Lakers’ large and devoted fan base is expected to hit the road to watch the action in opponents’ arenas, and they promise to neutralize any home court advantage.

“Phoenix is the closest NBA city to us and it’s probably the only stadium we could make a drive to,” Harb said. “If my schedule permits, I will definitely be making it out to the games there.”

With no opportunities to watch their Lakers play in Staples Center—where players will compete in an empty arena—many fans expressed their desire to travel to out of state, including Arizona.

The Suns already host a decent number of LA fans every year because Phoenix is close, and watching a game there can be cheaper than watching the Lakers at home, Los Angeles sports fan Daniel Makar said. He visits PHX Arena (formerly Talking Stick Resort Arena) every year because the combined cost of travel and tickets still is less than the price of the Lakers tickets he purchases.

“Half of the stadium is Laker fans, I’m not even kidding,” Makar said of the LA games in Phoenix. “If fans are willing to travel this year like they do to Phoenix, every game could be a neutral game for us.”

When the Suns hosted the Lakers on Nov. 12 last year, losing to LA 123-115, one of the enduring images of the night was LeBron James greeting Lakers fans flocked around the exit tunnel, Makar said. That sea of purple and gold effectively eliminated the Suns’ home court advantage, he said.

Judging by the number of people who follow team Facebook pages, the Lakers have the biggest fan base in the NBA with more than 21 million followers, according to Statista. The team also ranked first in “social equity,” according to sports analytics research from Emory University in 2019, indicating it has the most fans across social media. The Los Angeles Lakers social media pages are the most liked and followed on Twitter, Instagram and Facebook.

The research also found that the Lakers rank first in the NBA in “road equity,” fueling the common belief that Lakers fans supply a significant portion of fans in every NBA city, including those on the East Coast.

Former Southern California resident and Lakers fan Spencer Jallali said the Lakers fan base still makes noise in major Eastern cities. He has lived in Boston and Washington, D.C., home of the Celtics and Wizards, respectively, but it’s the Lakers who drew Jallali to games in those cities.

“Consistent fan turnout at away games has always been a big thing for the Lakers when I went to games,” he said. “I expect to see a sharp increase in turnout this season with Lakers Nation dying to see their team play.”

After Harb traveled out-of-state to watch the Lakers take on the Brooklyn Nets, he said he was surprised to see how far the LA fan base extends.

“Lakers fans showed their impact, even on the other side of the country,” he said. “There’s some real diehard fans in Brooklyn, so the fact that Laker fans could be heard over them is pretty cool.”

The size and popularity of the franchise is evident, but means that millions of Angelenos will be relegated to watching games at home. 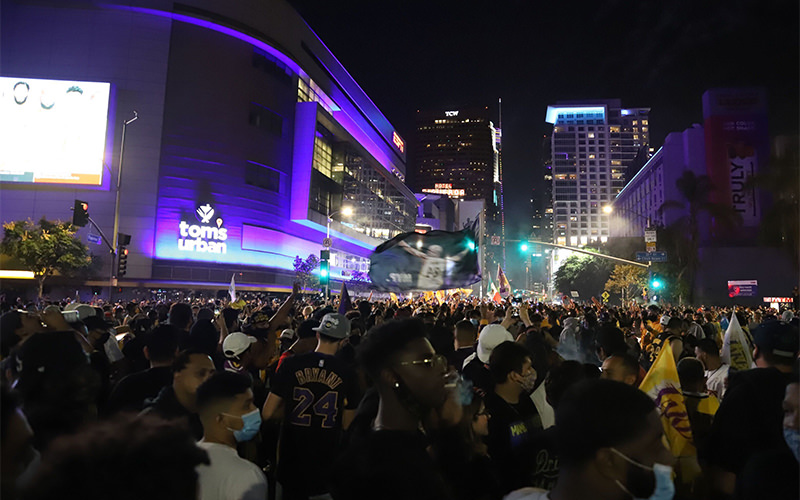 Despite the alarming condition of COVID-19 in Los Angeles County, fans could not be stopped from rioting in the streets on Oct.11 when their beloved Lakers won the NBA championship. (Photo courtesy of Daniel Makar)

Los Angeles County has been in the widespread “tier 4” of Gov. Gavin Newsom’s Blueprint for a Better Economy. The county reported a record number of infections Tuesday, according to the Los Angeles Times. Adjacent counties are similarly affected.

“I was disappointed, but I obviously understand why they’re doing it,” Harb said of the Staples Center shutdown. “California and Los Angeles aren’t doing well.”

Season ticket holders, who are guaranteed seats to all Lakers home games during the regular season, are even more disappointed, especially after so many of last year’s games were canceled or played without an audience.

“There’s thousands and thousands of people on that list, so becoming a season ticket holder is really tough for Laker fans,” he said. “Losing that privilege is definitely disappointing, especially after a championship season.”

“If they have some kind of fan cam that would be cool,” he said. “But having nothing at all would be pretty disappointing, even for the players.”

On March 6, before the NBA’s bubble format for the season’s resumption was proposed, James stated in a postgame news conference that he would not play in front of empty seats. And during the bubble, James expressed his desire to reconnect with Lakers Nation multiple times.

“I definitely love playing in front of the fans, the fans are what make the game,” James said in a postgame interview Aug. 8. “Without the fans, I wouldn’t be who I am today. To all the fans out there that come watch me play, I miss you guys and hopefully someday I can get back to that interaction.”

Because of the pandemic, however, James – who recently signed an $85 million contract extension of at least two years – will be forced to wait longer. Fortunately for the Lakers, they were tied for the best road record in the NBA last season and are fresh off winning a championship with no fans. Their fan base believes that although interstate travel will happen, it is not necessary for the team’s success.

“The fact that the Lakers were successful in the playoffs at the Orlando bubble shows that we can win on the highest level without fans,” Harb said. “We will be fine.”