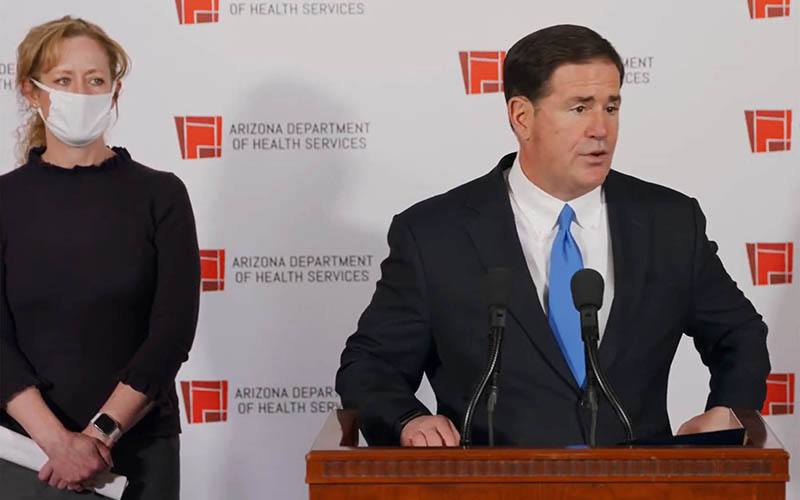 Gov. Doug Ducey announced new restrictions on gatherings and new funding for nurses, but brushed off calls for restrictive measures like a curfew called for by medical experts, who said the state is on the verge of a catastrophe. (Photo courtesy Governor’s Office)

Ducey also ordered insurance companies to cover the costs of COVID-19 vaccinations, which could arrive in the state as soon as this month, and called on residents and local governments to more strictly enforce their current mitigation protocols in lieu of new restrictions.

“I believe we should instead focus on accountability and enforcing the rules we have in place now,” Ducey said.

That was not the feeling of health experts and hospital officials, who wrote that it is “imperative that the governor’s office implement enforceable measures to limit the spread and save the lives of Arizonans.”

The letter included a “strong recommendation” that Ducey halt indoor dining, group athletic activities, and gatherings of more than 25 people, impose a 10 p.m. curfew and outline plans for next steps that include provisions for closing as well as reopenings, as the situation changes.

The restrictions can be implemented without an elaborate enforcement plan, the letter said, since “strong messaging from the governor’s office and ADHS (the Arizona Department of Health Services) will create a sense of urgency.”

Ducey delivered the message Wednesday, but not the restrictions that health officials asked for.

He did restrict gatherings to fewer than 50 people, unless local government officials determine that sufficient safeguards are in place to allow for a larger gatherings. That was one of three executive orders that take effect tomorrow, along with an order making it easier for restaurants to get permits for outdoor dining and another requiring health insurers to pick up the entire cost of a patient’s COVID-19 vaccination.

Ducey also announced the allocation of $60 million to hospitals around the state to help them hire nursing staff that will be needed to cope with the surge in COVID-19 patients, a surge that is expected to exceed hospital bed capacity in a matter of weeks. The funding comes on top of $25 million allocated for the same purpose in November.

“This significant investment will allow us to provide an additional 500 nurses through the end of the month with additional staffing to last through January,” Ducey said. “It will ensure our hospitals can care for those who need it, and that the existing staff in our hospitals are properly compensated for their dedication and commitment.”

But Ducey and Dr. Cara Christ, the director of the state health department, said there is no denying that numbers now are headed in the wrong direction.

“Last week, the percent positivity was 15% and this week we’re trending higher,” Christ said. “Hospitals continue to see increased demand and increased usage of inpatient and ICU (intensive care unit) beds. My team is working with public health, hospital officials and through public education to address this at all angles.”

That help cannot come fast enough for a team of researchers from the state’s universities, who warned in a memo Friday of a looming “catastrophe” if action is not immediately taken to slow the spread of the virus.

That memo was cited Wednesday by Dr. Joshua LaBaer of Arizona State University’s BioDesign Institute, who discussed the growing alarm over the state’s hospital capacity.

“On Monday, 11 of the 82 ICU’s in the state were full,” LaBaer said. “The model also predicts that in about two weeks, hospitals will be full. By the new year or early in the new year, there will be probably enough COVID cases to fill hospitals, and of course that means there will be fewer beds available for people with other illnesses.”

Arizona added 3,840 new cases Wednesday and 52 deaths, bringing total infections to 340,979 and deaths to 6,739. The average number of daily new cases over the past week is more than 4,300, the highest infection rate since the first case was confirmed in Arizona in late January.

The state health department’s data dashboard said COVID-19 patients were taking up 642 ICU beds in the state Tuesday, 37% of the total. Other patients took up 932 ICU beds, or 53% of the total, on Tuesday, leaving just 10% of ICU beds available.

LaBaer said winter is typically busier for Arizona hospitals than summer months, which is “going to put some additional stress” on the response to COVID-19. 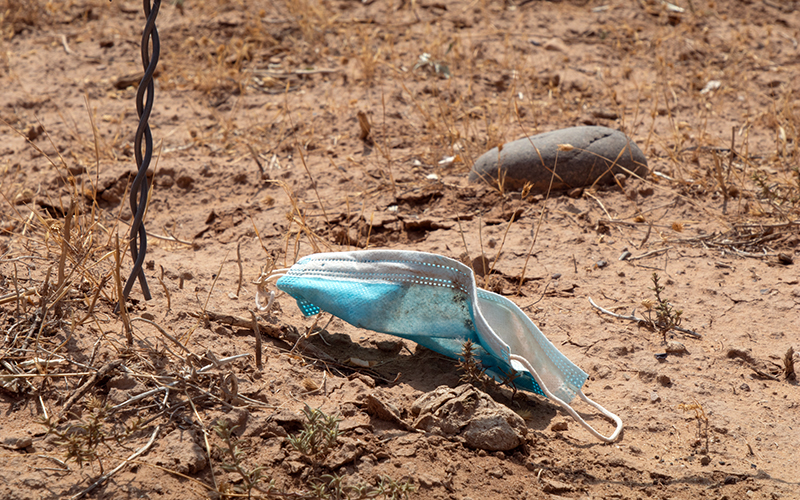 The response will also be hampered by the fact that COVID-19 cases are surging across the country. Arizona was able to cope with a summer surge of COVID-19 “by bringing nurses in from out of state,” LaBaer said, but that will not be possible now.

“Nurses are heavily occupied elsewhere in the country, so it will be very hard to get them to come to Arizona at this point,” he said. “A hospital bed is not a hospital bed unless there’s a nurse who can tend to that bed.”

One of the biggest concerns for health experts is the “really rapid rise in per capita number of cases” in rural counties, LaBaer said.

In a University of Arizona report this week, Dr. Daniel Derksen said that Apache, Navajo, Santa Cruz and Yuma counties all had infection rates and death rates per 100,000 residents that were well above the state’s rate – and in some cases, above the national rate.

Derksen, director of the Arizona Center for Rural Health, said those numbers threaten health care across the board.

“If you’re in a motor vehicle accident, you have a heart attack, you have a stroke … you still need that capacity to take care of people,” Derksen said. “It’s very difficult to be in that position of a doctor or a nurse, trying to make that triage decision about who gets care and who doesn’t because every single bed and cubicle and ICU bed is full.”

Derksen said a sense of urgency is needed, something the hospitals’ letter said needs to be paired with action within the next 72 hours.

“Please help us, as the healthcare leaders of your state, to bridge this gap until the vaccine can be widely available to the public,” the letter read.