ANAHEIM, California – Nicholas Mikhail has been a dual-threat in soccer and football throughout his high school career in Southern California. Entering his senior year in 2020, he was prepared to improve his chances of being recruited by college teams. The pandemic, however, had other plans.

After the California Interscholastic Federation postponed all seasons in July, Mikhail and many other multisport athletes were pressured to drop all but one sport due to the overlapping of their seasons. California fall sports will take place during winter, while winter and spring sports will take place concurrently next spring. Fall seasons will start in December at the earliest.

“It’s going to be tough with scheduling and practice,” Mikhail said. “A lot of sports are now at the same time, so kids that normally play in more than one season now have to make a decision as to what sport they are going to play.”

Mikhail was a midfielder for the soccer team and a kicker for the football team at Fairmont Preparatory Academy in Anaheim. He said the concurrent spring sports seasons in 2021 will force multisport athletes to make a decision that most don’t make until near the end of their college careers: Which sport do they continue to focus on at the next level?

Mikhail referred to Arizona Cardinals star quarterback Kyler Murray, who played baseball and football all the way through college and got drafted in both sports. Murray chose to join the National Football League, but Mikhail says athletes his age are being forced to make this decision too early. 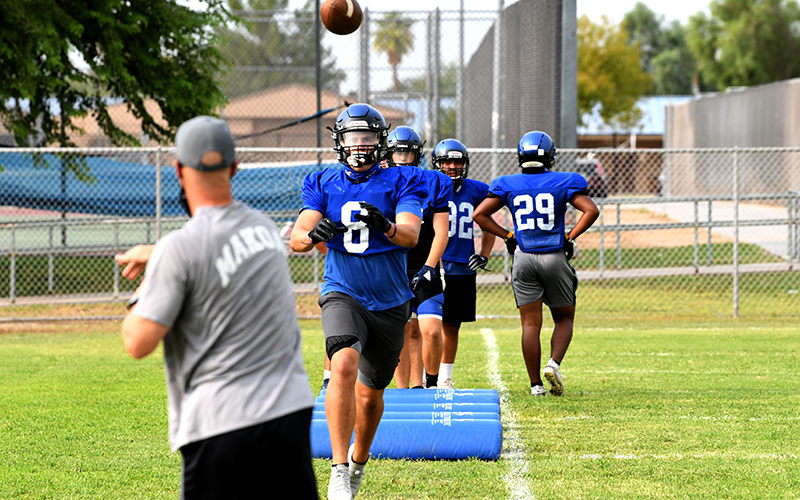 “Soccer is my stronger sport and I also play on a club team, so I’m going to end up just playing soccer this year,” Mikhail said. “It sucks because after my football season, my coach said if I stuck with it, I definitely had the leg to kick in college.”

He’s still weighing his options on which school he will play for next year, but said he’s giving up on any chance of being recruited for football.

Basketball, soccer, baseball, tennis and swimming seasons now take place in the spring. Although soccer and football occur in separate seasons, Mikhail said there still isn’t enough time in between the two for him to play both.

“Even for sports that aren’t in the same season, there are preseason practices or year-round workouts that will interfere with the season,” Mikhail said. “There’s pretty much no way you can be 100% committed to each team with how close the seasons are now.”

Robert Viviano is Mikhail’s soccer coach at Fairmont Prep and a former college soccer coach and player. He said that the pandemic is really hurting someone like Mikhail, who isn’t a high-profile athlete and is relying heavily on the recruitment process.

“Nick is a great player and he can obviously play for a Division 3 school,” Viviano said. “But I think he could have played at an Ivy League Division 1 school if COVID wasn’t here because he’d be able to acquire more film and market himself.”

The postponement of all competitive play puts California athletes in a difficult situation in this regard as well. Although the NCAA dead period postpones in-person recruiting until January 2021, California athletes have no content to create tapes. Athletes in other states – including Arizona, which started competitive football on Sep. 30 – will have more opportunity to show their abilities to college scouts.

Next College Student Athlete is a business that helps student athletes build resumés and get in contact with college scouts. Julian Jenkins, the senior director of regional recruiting, said that higher-profile athletes who already have highlight videos and online followings are not affected as much as mid-tier talents fighting for scholarships.

“Recruiting is being affected a lot by people not being able to play in person,” Jenkins said. “Athletes that especially don’t have much going on in recruiting prior to the pandemic are at a severe disadvantage.”

Other athletes are refusing to let the high school sports stoppage interfere with their athletic aspirations by deciding to postpone high school entirely. 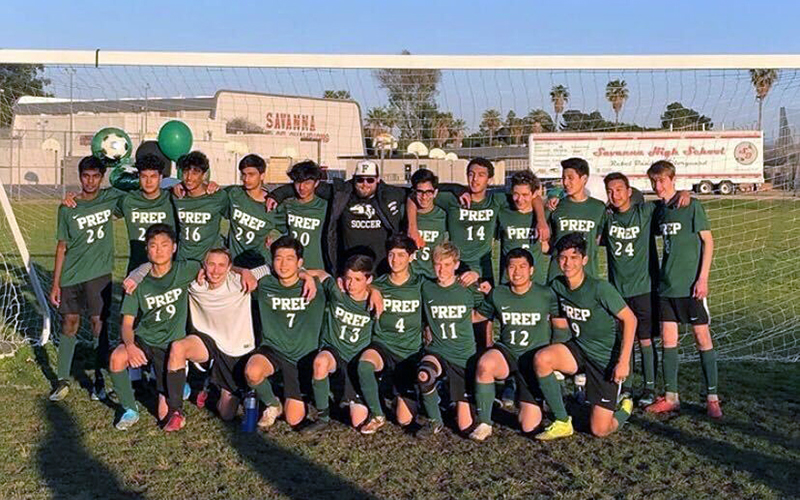 The Fairmont Preparatory Academy’s soccer team has been unable to play competitively since March of this year, forcing all of the team’s members to train on their own. (Photo courtesy of Nicholas Mikhail)

Ryan Luce expected to be a freshman in high school this year, but his family decided to hold him back a year so he could continue playing baseball and football during the hiatus. After the California Interscholastic Federation’s July announcement that high school sports would be postponed until 2021, Luce enrolled in a sports academy middle school called the Togethership in San Clemente.

“I did not want to leave my friends behind in high school, but I do want to play in the MLB one day,” Luce said. “I could not afford to not play sports my entire freshman year, and I didn’t even know if sports would be able to come back this year at all.”

Through his school, Luce engages in monitored workouts and training every morning and gets the chance to play competitively. His team travels to Arizona to participate in showcases: Luce said he last played baseball in Yuma three weeks ago.

The Togethership is catered to athletes and is keeping its students in shape to compete, Luce said. His family is happy with the drastic decision, as they found a unique way that multisport athletes in California athletes can continue to focus on their passion for the remainder of 2020.

Other athletes will be forced to endure the struggles of handling multiple sports on top of their academic coursework once winter sports begin. Christian Younan is a junior at Santiago High School in Corona who plays safety for varsity football and ran varsity track starting his sophomore year.

He said that with the lack of sports this semester, he is getting straight A’s and is having no trouble shouldering the load of four advanced classes. Along with his involvement in these sports, Younan is also studying to become a lawyer and participates in mock trials as part of his extracurricular activities.

For Younan, football and track occur in different seasons, but he said their practices still overlap and will not allow him to give 100 percent commitment to either team.

“It’s going to be a huge juggling act because I’m taking four advanced placement classes and I’m getting home between 9 and 11 o’clock because of practices and games,” Younan said. “It’ll definitely be a more vigorous environment for us (multisport athletes). We’re going to come out stronger, both physically and mentally.”