Government and pharmaceutical company efforts to quickly develop a vaccine for COVID-19 may be paying off, with the first vaccine nearing approval and more expected in coming weeks. But those vaccines would not be available without the tens of thousand across the U.S. who stepped forward to be test subjects for clinical trials of the drugs. (Photo by Lance McCord/Creative Commons)

WASHINGTON – With Santa Cruz County facing one of the highest rates of COVID-19 cases in the state, Tubac Fire Department Fire Chief Cheryl Horvath knew that a vaccine is what’s needed to bring an end to the pandemic.

But a vaccine requires human volunteers as test subjects.

Horvath had never taken part in a clinical research trial before and was a little concerned about the risk, but she said she wanted to do something that would help her community and also protect her firefighters. So after some research, she signed up.

Rep. Amish Shah, D-Phoenix, knows all about the risks involved in clinical trials from his 19 years working as a doctor. But he also knows the safeguards. And Shah, like Horvath, wanted to help.

“Having a familiarity with it, I felt comfortable volunteering for it,” Shah said. “I understand the risk and benefits of what is involved, and I think it’s a service to humanity.”

They are just two of the tens of thousands of people across the country who have volunteered to be test subjects for pharmaceutical companies racing to come up with a vaccine to fight the coronavirus that had infected 10.7 million and killed 244,269 Americans as of Friday, according to data from Johns Hopkins University. Arizona officials reported 269,577 people had tested positive for COVID-19 and 6,257 had died from it as of Friday. 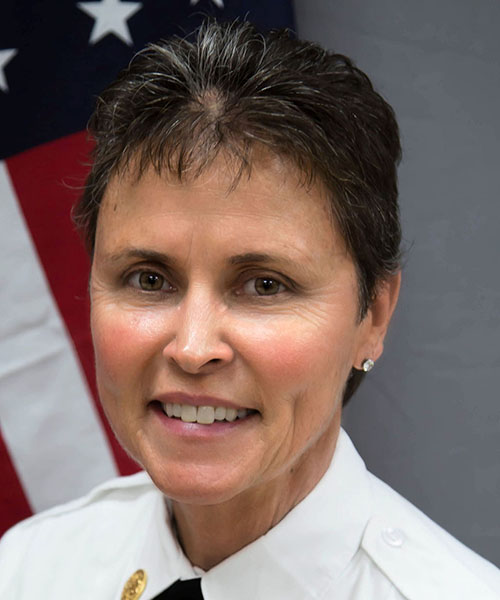 Tubac Fire Chief Cheryl Horvath said she a little concerned about the risk of being a test subject in a COVID-19 clinical trial, but wanted to do something to help her community and protect her firefighters. So after some research, she decided to sign up. (Photo courtesy Cheryl Horvath)

Their work may be paying off. Pfizer announced on Monday that one of their vaccines was approved for an Emergency Use Authorization by the Food and Drug Administration. The Trump administration said Friday it could soon have tens of millions of doses of the Pfizer vaccine available soon, with more vaccines from other companies expected in the coming weeks.

But, being a test subject is not without risks. Johnson & Johnson and Eli Lilly both temporarily halted their trials last month after an individual Data Safety and Management Board recommended a pause in recruitment when one of their subjects potentially developed side effects from the vaccine. But those trials started back up again a few weeks later after that oversight board recommended it.

Shah said that’s how the process is supposed to work. He said there are side effects with anything done in medicine, and a participant developing side effects is the very reason clinical trials exist.

“That is something that is built into their protocols, too,” Shah said. “They know that they have to monitor people carefully, look for those side effects, and then have a plan for when those occur.”

“They typically will take care of that person on their dime,” Shah said. “And they will then decide, based on everything that has happened to that person whether or not to continue or pause the trial.”

Shah said the first step in a clinical trial is determining who is eligible for the vaccine trials, which is determined through a lengthy medical screening. After that, researchers will start an administrative file and inform the participant of any and all risk involved.

“Once you throw your hat into the ring, they send you quite a bit of information,” said Horvath. When she learned of all the risks involved, including the fact that she would not receive a live strain of the virus, it put her at ease.

The next step is testing participants with a nasal swab and blood-antibody tests to determine if they currently have COVID-19, or had it in the past. Finally, participants will receive either the vaccine or a placebo, which is most likely a saline solution.

One month later, participants return, and the same procedure would be performed a second time.

While some people might be hesitant to volunteer for these vaccine trials, Shah said this is standard for clinical research from his own work in the medical field, and now as the subject of one in Phoenix.

He said he learned of the need for test subjects after seeing an article in the paper that talked about COVID-19 vaccine trials taking place in Phoenix. Shah did not hesitate to call the number in the article – he said he knew he had to volunteer.

Working as an academic researcher and full-time faculty at Mount Sinai Medical Center in New York City gave him both the knowledge and experience to trust in the system of clinical trials. 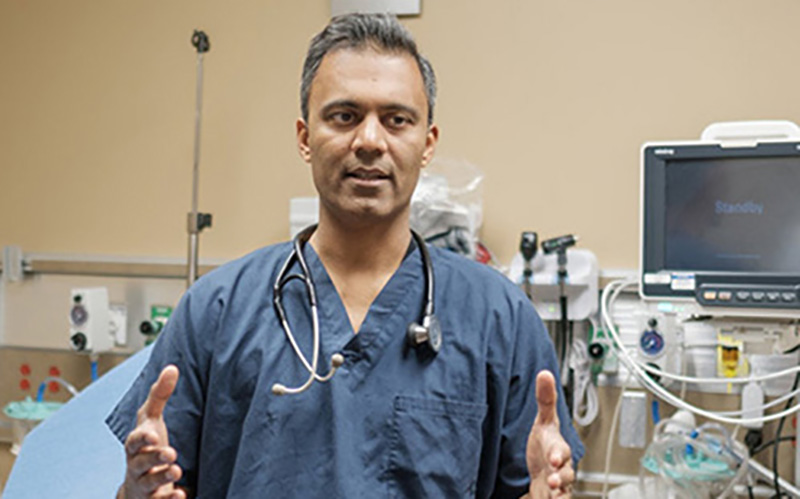 Rep. Amish Shah, D-Phoenix, said his training as a physician made him more comfortable with the thought of being a COVID-19 vaccine test subject and that signing up for the clinical trials was the right thing to do – particularly since minority communities are often underrepresented in such groups. (Photo courtesy Amish Shah)

Shah, a first-generation American, also knows that Asian-Americans are not a well-represented group in the study, and he wants to make sure that if people like him get the vaccine, they will be safe. Shah said researchers continue to struggle with recruiting minorities, but he hopes to use his own experience to educate the community.

“They were having trouble having certain underrepresented groups be in the trial,” Shah said. “I passed on that information to a lot of my friends who are members of those groups.”

Gilberto Lopez, associate professor of Transborder Studies at Arizona State University, said part of the reluctance to volunteer among minorities comes from historic abuses. He said that history needs to be addressed when researchers try to recruit a more diverse group for clinical trials.

Communicating in the potential subject’s language is one way to narrow the gap, along with using culturally tailored and relevant information. Lopez said he is working with Creative Frontiers, an international marketing agency, along with the University of North Carolina, to increase the number of Hispanics in COVID-19 vaccine research.

“We are creating a series of Spanish language animations that explain clinical trials, the COVID-19 vaccine, and what to expect in their participation of the clinical trial,” in addition to their rights as trial participants, Lopez said.

For many, it’s a question of addressing fears. Horvath said that the lab she goes to in Tucson for her part in the study takes all standard precautions to protect volunteers by testing initially and regularly throughout the study.

As someone approaching the 65-and-up population, Horvath is considered more vulnerable to the virus than a younger person, but said she “just felt like I would have been a good subject” for this. After reading up on the vaccine and having any questions she had answered at her first orientation, she “wasn’t too concerned after that.”

“I don’t get sick very often,” she said. “I felt like the risk was low enough that I was relatively comfortable doing it.”