Churches adjust to COVID-19 restrictions in Southwest, many pray to reopen in California 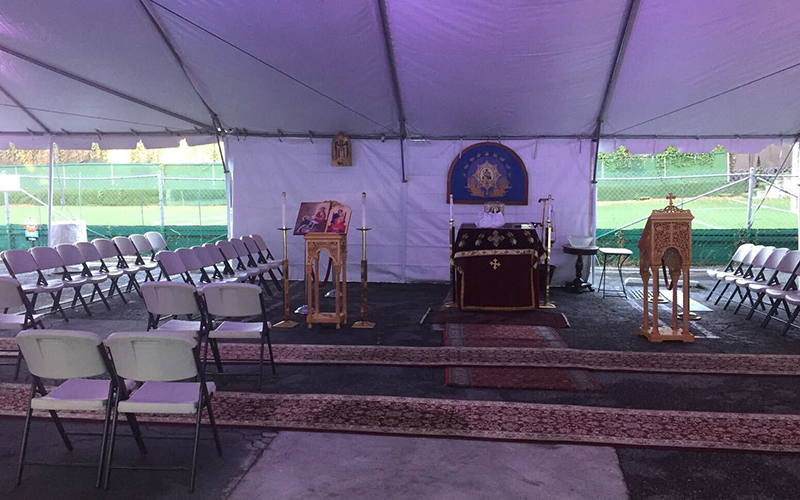 Priests at the Holy Virgin Mary and St. Pishoy Coptic Orthodox Church in Los Angeles are making adjustments to ensure the faithful can safely worship under state law. It began outdoor services May 1. (Photo courtesy of Father James Soliman)

LOS ANGELES – Since the pandemic changed the way American Christians gather, churchgoers have endured record heat and the din of nearby traffic as they filled parking lots and outdoor spaces to practice their faith.

Across the Southwest, churches have had to adapt to the threat of COVID-19, with many moving to online or outdoor services. Church leaders are eager to return to the inner sanctum of their buildings, but Los Angeles County remains under the strictest pandemic restrictions in the state.

During a recent Mass at Holy Virgin Mary and St. Pishoy Coptic Orthodox Church, Father James Soliman dealt with a variety of challenges to reviving the spirit and voice of the Coptic faith. He hopes for a return to normalcy.

“The second the state lets us back inside, we will be back inside under whatever restrictions are necessary,” he said.

Until then, Soliman and fellow priests at Holy Virgin Mary and St. Pishoy are making adjustments to ensure congregants can safely worship under state law. The church began outdoor services May 1.

“We have been conforming to whatever state laws are being released,” Soliman said. “When they said to close, we closed, and when they said we could open outside, we jumped on that opportunity.”

The church rents a large tent for its weekend services and sets up in the church parking lot. However, the tent was no match for the recent California heat wave, which forced Soliman to end Mass 30 minutes early. Prayers and hymns are more hushed than normal to respect neighbors, Soliman said, as typical Sunday services take place from 8:30 to 10 a.m.

Holy Virgin Mary and other open Coptic churches in California are abiding by the state’s health protocols: Congregants are kept 6 feet apart, masks are required, hand sanitizing stations are available and vehicles are socially distanced.

At the Archangel Michael Coptic Orthodox Church in Orange County, just south of Los Angeles, some restrictions have been lifted and worship can be held indoors at 25% capacity or 100 people, whichever is less.

Father Youhana Ibrahim of Archangel Michael immediately resumed indoor Masses after Orange County permitted the opening of some indoor businesses on Sep. 8. With physical distancing and ushers to guide worshippers to their pews, Ibrahim was pleased to leave behind his outdoor services on the busy streets of Santa Ana. 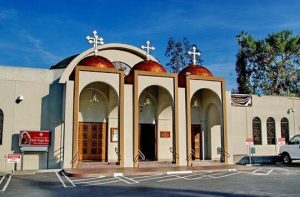 Worshiping outside isn’t as fulfilling as inside Holy Virgin Mary and St. Pishoy Church, which is filled with holy iconography and the “heavenly aroma” of incense. (Photo courtesy of Father James Soliman)

“People get easily distracted because you’re basically in a parking lot,” he said. “There’s streets right there and cars honking and just too many noises that take people’s attention away from the Mass.”

Also missing from outdoor church experience at Holy Virgin Mary and St. Pishoy, said Soliman, are the holy iconography inside the church and the “heavenly aroma” of incense burned during Mass. He added that the voice of the church is not quite the same when outside.

“The voices of our congregations are not as thundering because we are not indoors,” he said. “The sound just dissipates, so it doesn’t seem like one body or one unified body praising God together, it’s a little more subdued.”

Although Ibrahim’s Masses are back indoors, both his and Soliman’s churches are restricted to 25% capacity, so online registration is required to attend services. The Archangel Michael congregation must do this every two weeks to ensure seats.

“I’ve noticed that younger people are not making it to church as much,” said Matthew Ibrahim, a Coptic Christian from the St. Paul American Coptic Orthodox Church in Tustin. “The way things work now with registration requires you to be proactive, and a lot of younger people won’t take initiative.”

Soliman said health also is a challenge for his congregation.

“The young professionals who were raised here and are more scientifically minded are more paranoid and more afraid to leave their homes,” Soliman said.

Coptic churches in Arizona did not have the same struggles as those in California. Arizona Gov. Doug Ducey lifted his stay-at-home order on May 15, allowing the reopening of Archangel Michael American Coptic Orthodox Church in Phoenix.

Due to Arizona heat, opening outside was never an option and all services were hosted online, Father Arseny Aziz said. The church briefly had a reservation system in May and June before opening at 50% capacity in early July. Half the congregation attends on Saturday and half attends on Sunday.

“Things have been going pretty well in terms of reopening,” Aziz said. “We weren’t closed for too long, and there is an update monthly for how we can take the next step.”

Some California Coptic churches do not have outdoor spaces for worship. St. Monica American Coptic Orthodox Church in Newport Beach had rented space from a Roman Catholic church, but now it has no home.

Theolla Karlous is a member of St. Monica, which she described as more of a “community” because they lack their own building.

“Right now we don’t have a home,” Karlous said. “But we stay together through everything and find ways to get it done.”

Congregants travel around Southern California, renting outdoor spaces and hosting liturgies at other Coptic churches. Karlous has traveled as far as Anaheim, Los Angeles and Oxnard.

Soliman said this movement makes it more difficult for churches as they try to accommodate other Copts in the state. Many visitors who ask to attend his Masses are from other churches. He tries his best to account for them, but restrictions on capacity in California churches continue to make it difficult.

“As Christians,” Karlous said, “right now is all about being flexible and maintaining faith. We have to learn to be flexible.”