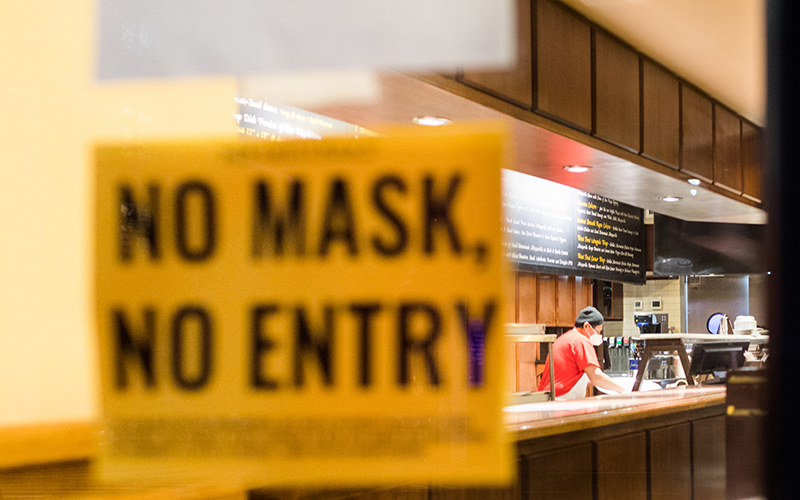 Graham County reduced its COVID-19 transmission rates to the point where it can be classified as being at moderate risk of transmission, a rating every county in Arizona has now reached, state officials said. “Moderate” is the level at which certain businesses, like theaters, gyms and waterparks, can begin to reopen. (Photo by spurekar/Creative Commons)

WASHINGTON – Arizona officials hailed a COVID-19 milestone Thursday, when the final county in the state crossed a coronavirus transmission threshold that lets some shuttered businesses begin the process of reopening.

The Arizona Department of Health Services said Graham County moved from the “substantial” to “moderate” transmission category, in which businesses such as restaurants, waterparks and movie theaters can reopen if they put health safeguards in place.

The reopenings are phased and officials said there will be little immediate change in people’s lives or livelihoods. But they still welcomed the news and cautioned against backsliding “in such a manner that we would have to take more stringent public health measures,” one official said.

“The choices Arizonans have made in the interest of public health have gotten us to this milestone,” said Dr. Cara Christ, the health department director, in a statement announcing the change.

“COVID-19 remains in our communities, so it’s essential that everyone continue masking up, maintaining physical distance, washing our hands thoroughly and often, and taking other steps to reduce the spread,” Christ said.

The health department determines a county’s status based on three criteria: the number of cases per 100,000 residents, the percentage of positive tests and the percentage of reported COVID-like illness. The benchmarks must be met continuously for 14 days, with a 12-day reporting lag.

A moderate transmission level requires 10-99 cases per 100,000 and a 5-10% rate for both positivity and COVID-like illnesses. Fourteen counties now rank as moderate while one, Greenlee County, is in the minimal range, with an even lower transmission rate.

At the moderate level, gyms, fitness centers, indoor theaters, water parks and tubing can reopen at 25% occupancy if they implement specified mitigation strategies to curb the spread of the virus. Bars and nightclubs that provide dine-in food service can reopen at 50% capacity.

Graham County Manager Dustin Welker said the county will not see big changes, since most businesses were already working with the state to keep business open and running during the last few weeks as the county has “come close to achieving all benchmarks.”

As it neared the benchmark, Welker said, Graham County worked “to support our local businesses by helping them keep their doors open during the COVID-19 pandemic.”

Arizona Chamber of Commerce spokesperson Garrick Taylor welcomed the Graham County news as more evidence that Arizona is slowly but deliberately returning to a somewhat state of normalcy.

“Let’s keep our foot on the gas and ensure we maintain this good data and don’t put ourselves at risk to backslide in such a manner that we would have to take more stringent public health measures,” Taylor said.

In order to reopen at the specified levels, businesses have to post a notice attesting to the fact that they are following safety guidelines from the state health department and the Centers for Disease Control and Prevention. That notice is posted on the AZDHS website and must also be printed and posted where customers can easily see it, such as on a front window or door.

“I think it’s a really effective tool,” said Will Humble, executive director for the Arizona Public Health Association. “You’re requiring the business as a condition of them opening to make certain promises. … And if they don’t keep those promises, that attestation is then void, and therefore, they would have to close automatically.”

Humble said the system is not perfect. While most counties have continued to improve, some have shown signs of moving backward on certain metrics.

“There’s a couple of counties – Pima and Coconino – that have backslid on some of the indicators, but not all of them,” Humble said. “The health department said that it’s a one-way street, basically. When a county achieves the goals, they can reopen with the attestation but then if they backslide, it doesn’t mean that they have to close again.”

Health department communications director Steve Elliott said in an email that businesses would not be limited to June’s levels if they were operating in a county that saw “an increase in one of the three data points used in those benchmarks.”

“With those (safeguards) in effect, increased enforcement, positivity well below June and July levels, and hospitalizations far lower than at that time, ADHS has determined that a county will only move ‘backward’ if it hits all three benchmarks,” Elliott’s email said. “Should this occur, ADHS will work with county health officials to determine next steps.”

But the chamber of commerce’s Taylor said businesses have an incentive to stick to the safeguards.

“I think there’s a willingness by most businesses to take whatever precautions are necessary to ensure that their customers and employees remain safe while also ensuring that the normal operations of the business can continue,” Taylor said.

“This has been an extremely difficult period for employers and the vast majority of employers don’t want to do anything to jeopardize their business,” he said.