Some mourners wore clothes honoring Ginsburg while others brought signs, flowers and memories of her impact on their lives. (Photo by MacKenzie Belley/Cronkite News) 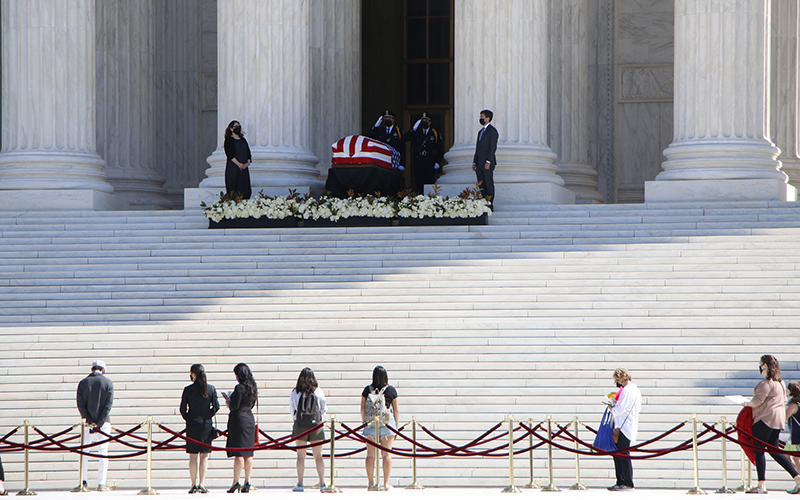 Mourners file past the front of the Supreme Court where they pay respects – from a safe social distance – to the late Supreme Court Justice Ruth Bader Ginsburg. (Photo by MacKenzie Belley/Cronkite News) 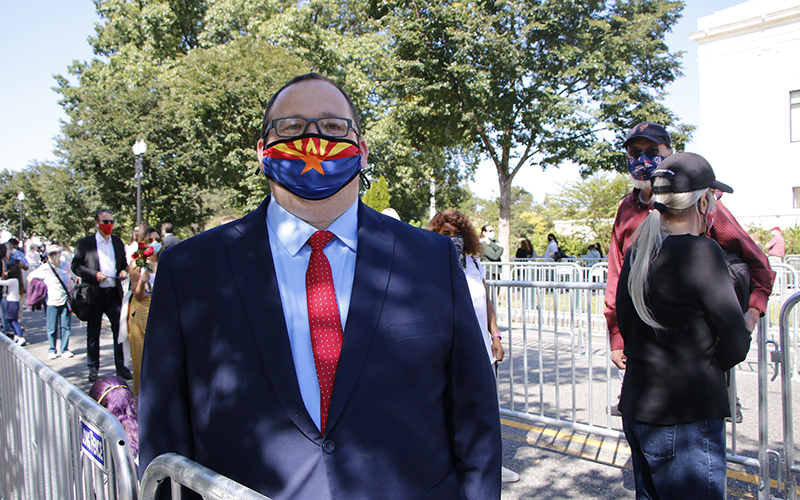 Queen Creek resident Samuel Jordan flew to Washington to pay respects in person to Ginsburg, who had a “great impact” on his life. (Photo by MacKenzie Belley/Cronkite News) 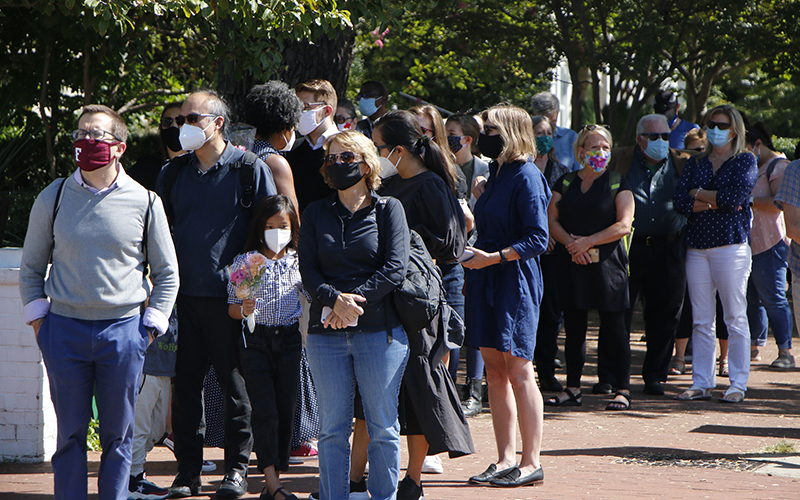 People were lined up for hours before the start of the viewing for Ginsburg at the Supreme Court on Wednesday. (Photo by MacKenzie Belley/Cronkite News) 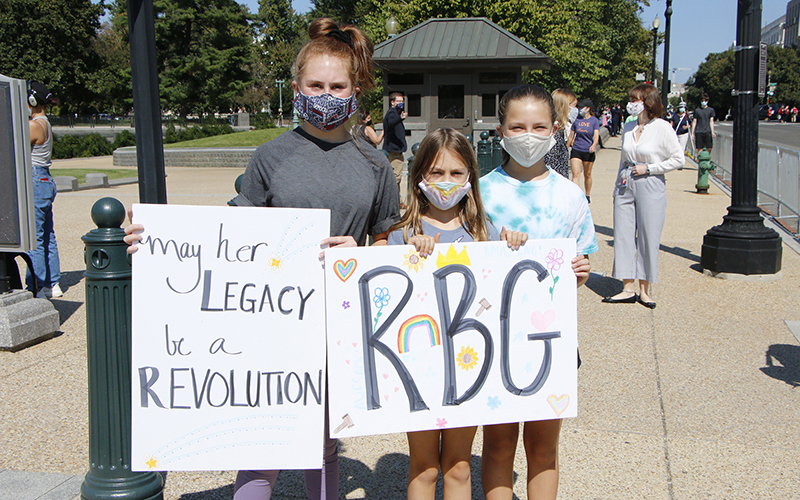 Many people brought their children to the Supreme Court on Wedensday to honor the late Justice Ruth Bader Ginsburg. (Photo by MacKenzie Belley/Cronkite News)

WASHINGTON – Long lines formed outside the Supreme Court on Wednesday as admirers came to pay their final respects to the late Justice Ruth Bader Ginsburg, a liberal icon whom one mourner called a “lion of equality.”

It was the first of several days of official ceremonies to mourn Ginsburg, who died Friday of complications from metastatic pancreatic cancer. Her death has sparked a bitter political battle in Washington over how and when she should be replaced, but that fighting largely took a backseat Wednesday to honoring the late justice.

“Ruth had a huge impact in my life, and was one of the primary reasons I wanted to go back and get a law degree at ASU,” said Samuel Jordan, a Queen Creek resident who flew to Washington so he could pay respects in person.

“She was short in stature but she made up for it when she spoke,” Jordan said.

The line started forming hours before Ginsburg’s casket arrived. Parents brought children, people brought flowers and signs, many wore shirts bearing messages about the justice and some girls even showed sporting a jabot, the lace collar that was a Ginsburg trademark with her judicial robes.

The mood was reflective, with many quiet conversations going on between people as they waited. Like Jordan, all had stories of ways that Ginsburg touched their lives, either through her position as a role model, through her rulings or her legal advocacy for women’s rights before she took the bench.

For some, the memories were more personal.

Bridget McGraw and Christine Brandes recalled their 2017 wedding at which Ginsburg officiated.

Brandes, a singer, met Ginsburg, a known opera buff, after performing in an opera in 2000 and the two crossed paths in subsequent years. When Brandes and McGraw decided to get married, they sent a long-shot letter to Ginsburg’s clerk asking if the justice would officiate.

To their surprise, they got an email back from Ginsburg herself saying she would “be happy” to. She performed the ceremony inside the Supreme Court on Jan. 19, 2017 – the day before President Donald Trump’s inauguration.

“She chose the time and I think it brought her great delight to celebrate love in that period of, you know, hate and distress,” McGraw said.

Bates said she is “quite concerned about the direction the country is going in right now,” moreso since the death of Ginsburg.

“Right now I think we’re in a very precarious moment and I hope that people are watching because with her passing, the court, one of the institutions that we count on for fairness, is at risk,” she said.

Democrats are demanding that the appointment of a successor wait until after this fall’s elections. They point to the Senate Republicans’ refusal to even give a hearing to President Barack Obama’s last Supreme Court nominee over the final year of his term.

But with just weeks to go until the Nov. 3 election, Republicans have said they will push through a replacement for Ginsburg. President Donald Trump plans to announce his pick, who is expected to be a woman, on Saturday and Senate Majority Leader Mitch McConnell has said he will push for a confirmation vote.

That didn’t sit well with many in line Wednesday. 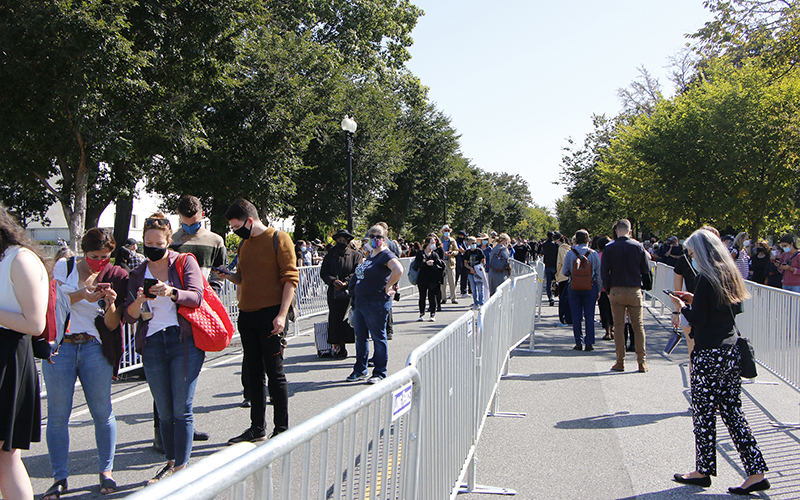 Police blocked off streets around the Supreme Court to accommodate the lines of mourners who came to honor the late Justice Ruth Bader Ginsburg. (Photo by MacKenzie Belley/Cronkite News)

“My wish is that they wait until after everything is settled with her death,” Jordan said. “She hasn’t even been buried yet and they’re already pushing forward on a vote for a nominee.”

But Rep. Debbie Lesko, R-Peoria, said Republicans have the votes to confirm a nominee and an obligation to do so.

“When you’re in power and you have the votes you do it, the Democrats would do it too,” Lesko said.

She welcomed the thought of another woman on the bench, “another strong conservative woman in there.”

But Lesko began her comments by reflecting on the loss of Ginsburg, “a very strong woman.”

“I didn’t agree with her on a lot of her opinions, you know, because I’m a conservative and she’s a liberal,” Lesko said. “But I respected her and she fought a lot of good battles and stood up well for women.”

Wednesday’s event began with a private service inside the court with family and other justices in attendance. Her casket was then moved to the top of the courthouse steps, with socially distanced mourners not able to get any closer than the bottom of the steps to briefly pay their respects before moving on.

The viewing will be repeated Thursday and Ginsburg will lie in state Friday in the Capitol, the first woman accorded that honor. She will be buried in Arlington National Cemetery next week.

“It’s a grave loss, and you know and the time in which it’s happening couldn’t be more challenging,” Brandes said, “We just pray that her legacy of equality for everyone you know equal before the law it really plays out in the future because that’s what she’s given all of us.”