The late Supreme Court Justice Ruth Bader Ginsburg during a 2005 appearance at Wake Forest University. Ginsburg died Friday at age 87 and the fight over when and how to replace her has already started. (Photo by Ken Bennett, Wake Forest School of Law/Creative Commons) 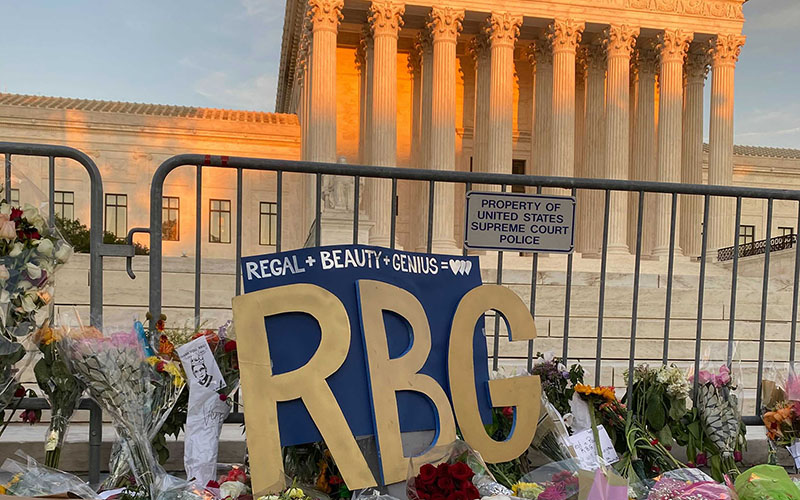 Tributes and mementos piled up at the Supreme Court this weekend to the late Justice Ruth Bader Ginsburg, known to admirers as “RGB.” Among hundred of opinions since 1993 were several directly affecting Arizona. (Photo by Olivia Munson/Cronkite News)

WASHINGTON – In a 27-year career on the Supreme Court, Justice Ruth Bader Ginsburg wrote more than 200 opinions and countless dissenting opinions that were known for the sharp language that made them one of her trademarks.

Any case before the Supreme Court has national impact, but a fraction of cases the court decided during Ginsburg’s tenure directly affected Arizona. Some she wrote, others she dissented from.

Cronkite News reviewed the Arizona opinions – in the majority and minority – from Ginsburg, who died Friday due to complications from metastatic pancreatic cancer.

The court held that the state could use marijuana evidence against a Phoenix man whose car was searched based on an outdated warrant. The majority said a “clerical error” on the warrant that let the officer search the car did not prevent introduction of the marijuana evidence. In her dissent, Ginsburg agreed with the Arizona Supreme Court, which she said found it “repugnant to the principles of a free society” to take a person “into police custody because of a computer error precipitated by government carelessness.”

The court reversed a circuit court ruling that voided part of the Arizona Constitution making English the state’s “official language,” with the lower court calling that a violation of the First Amendment’s free speech clause. The Supreme Court ruling did not address the constitutionality of the English-only rule, but said federal courts should have let the Arizona Supreme Court consider the state constitutional question first. Ginsburg wrote that “when a federal court is asked to invalidate a State’s law … the federal tribunal risks friction-generating error when it endeavors to construe a novel state Act not yet reviewed by the State’s highest court.”

The court said the defendant in a federal drugs and weapons case was not entitled to have his conviction overturned simply because he was forced to use one of his jury challenges to strike a potential juror who said he would likely agree with the prosecution. A lower court said the trial court violated Martinez-Salazar’s due process rights by rejecting his “for cause” strike of that juror. But the Supreme Court noted that Martinez-Salazar was ultimately satisfied with the jury he got. Ginsburg wrote for the court that “if the defendant elects to cure such an error by exercising a peremptory challenge, and is subsequently convicted by a jury on which no biased juror sat, he has not been deprived of any rule-based or constitutional right.”

The court upheld a water-rights claim by the U.S. government on behalf of the Fort Yuma tribe against challenges from Southwestern states, another turn in a court case that began in 1952. It also accepted a special master’s report on border disputes between the Fort Mojave tribe and the Colorado River Indian Tribe. Ginsburg wrote that the issue had roots in an 1884 executive order that designated 72 square miles on the Colorado River “for the benefit of the Quechan Tribe” which “offered to cede its rights to a portion of the Reservation … in exchange for allotments of irrigated land to individual Indians.”

The court held that Arizona’s capital punishment scheme was unconstitutional because it let the judge determine elements, not found by a jury, that elevated a case at sentencing to a death penalty case. The court said the Sixth Amendment requires such factors be found by a jury. “The right to trial by jury guaranteed by the Sixth Amendment would be senselessly diminished if it encompassed the fact finding necessary to increase a defendant’s sentence by two years, but not the fact finding necessary to put him to death,” Ginsburg wrote.

The court ruled that federal courts could weigh in on a dispute over an Arizona tax law that let taxpayers claim a deduction for donations to private schools, including those that espouse a particular religion. The state had successfully defended the policy to that point by claiming that the Tax Injunction Act prohibited federal courts from reviewing state tax law. But Ginsburg said that prohibition was only for people trying to shield themselves from paying taxes, which was not the case here. Federal courts had long been allowed to hear cases like Hibbs v. Winn, she wrote, pointing to intervention against tax laws aimed at protecting segregated schools.

The Supreme Court steps have been swept of flowers and candles, but that was not the scene this weekend when thousands turned out to mourn and memorialize the late Supreme Court Justice Ruth Bader Ginsburg. (Video by Concettina Guiliano/Cronkite News)

The court said the Court of Appeals for the Federal Circuit was wrong to say the Tohono O’odham could bring a second lawsuit on what the court said were essentially the same claims over mismanagement of tribal funds by the federal government. In a sole dissent, Ginsburg said the majority’s ruling unfairly tied the tribe’s hands. “In order to gain complete relief, the Nation had to launch two suits, for neither of the two courts whose jurisdiction the Tribe invoked could alone provide full redress,” she wrote.

The court held that a part of the Voting Rights Act that requires federal government approval for any change to voting laws in a state with a history of suppressing minority votes – including Arizona – was based on decades-old data and should be lifted. Ginsburg said the law has worked and is still needed, adding that throwing it out now would be “like throwing away your umbrella in a rainstorm because you are not getting wet.”

The court upheld the Arizona Independent Redistricting Commission and its ability to draw congressional and legislative district maps, rejecting claims by legislative leaders that only they had the power to do that under the Arizona Constitution. Ginsburg noted in the majority opinion that the commission had been created by voters – the ultimate decision makers – in an initiative. “The Framers may not have imagined the modern initiative process in which the people of a State exercise legislative power coextensive with the authority of an institutional legislature,” she wrote. “But the invention of the initiative was in full harmony with the Constitution’s conception of the people as the font of governmental power.”

The court held that the Mount Lemmon Fire District in Arizona qualified as a political subdivision, despite its small number of employees, and that it was consequently subject to the Age Discrimination in Employment Act. The department violated the act by firing two older firefighters, the court said. Ginsburg wrote that the language of the discrimination act left “scant room for doubt that state and local governments are ’employer(s)’ covered by the ADEA regardless of their size.”

The court affirmed Phoenix double-murderer James McKinney’s death sentence, rejecting his argument that a jury, not a judge, should have weighed mitigating and aggravating circumstances when imposing sentence. The majority said the courts properly weighed that evidence, but Ginsburg said the sentence should have been subject to Ring v. Arizona. “I would therefore hold McKinney’s death sentences unconstitutional under Ring, and reverse the judgment of the Arizona Supreme Court.”

The court held that a Mexican family cannot sue the Border Patrol agent who, while standing in Texas, shot across the border and killed their 15-year-old son in Ciudad Juarez – a case almost identical to a cross-border shooting in Nogales. A week after its ruling in the Texas case, the court sent the Nogales case – Swartz v. Rodriguez – back to a lower court with instructions to follow the ruling in the Hernandez case. Ginsburg’s dissent in Hernandez said the family should be allowed to sue over the actions of the “rogue” officer and the boy’s “location at the precise moment the bullet landed should not matter one whit.”