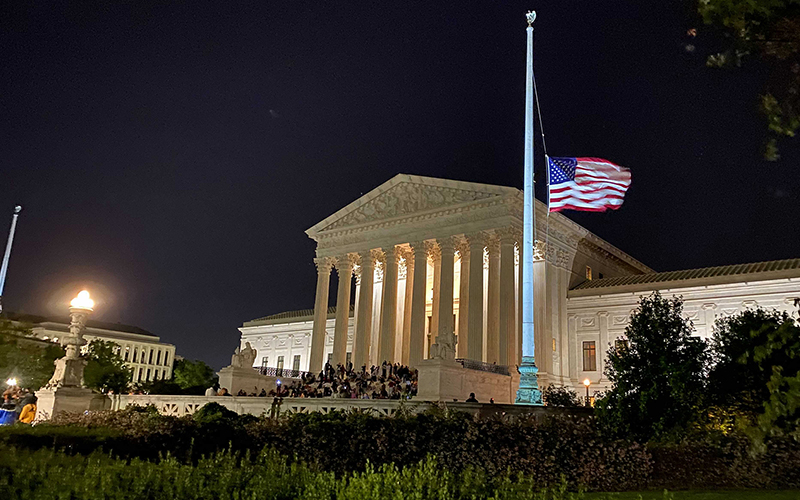 The flag flies at half-staff outside the Supreme Court to mark the death Friday of longtime Justice Ruth Bader Ginsburg. President Donald Trump said he expects to nominate a replacement this week. (Photo by Mythili Gubbi/Cronkite News)

WASHINGTON – When President Donald Trump sits down to pick a Supreme Court nominee to take the seat of Justice Ruth Bader Ginsburg, who died Friday, Phoenix native Bridget Bade will be on the list.

Trump added Bade 10 days ago, along with 19 others, to his short list of potential Supreme Court justices, bringing the total list of possible candidates to about 40. Others on the latest list included Republican senators, former solicitors general and high-profile attorneys who argue regularly before the high court.

Bade may be on the shortlist, but she also has a relatively short judicial resume.

A judge on the 9th U.S. Circuit Court of Appeals only since last year, Bade was a U.S. magistrate judge for seven years before that and spent the previous two decades in private practice and as a government attorney, mostly in Arizona. But she has left a relatively low profile.

When asked about Bade recently, Arizona State University law professor Paul Bender said in an email that he wasn’t “sure if I have ever heard of her, actually.”

The American Bar Association rated Bade “well qualified” for her circuit court position but would not comment otherwise. The 9th Circuit refused to comment and 5th Circuit Court Judge Edith H. Jones, for whom Bade clerked after law school, did not respond to requests for comment. Calls to legal watchdog groups were also not returned.

Josh Blackman, a constitutional law professor at South Texas College of Law Houston, said he did not know much about Bade but suggests that Trump may have had a different reason for floating her name – to boost his support in swing states like Arizona.

“I think, in some regards, Trump used this list as a marketing device,” Blackman said this week. “He picked certain judges who aren’t as well known in swing states in hopes to generate local press.”

Trump said Saturday that he expects to announce a nominee this week and it will “most likely” be a woman.

Bade is one of a number of women on the short list. She earned her bachelor’s and law degrees from ASU, where she served on student government, worked on the State Press and was an editor for the law journal, according to the questionnaire she filed with the Senate Judiciary Committee.

After earning her law degree in 1990 and clerking for Jones, she spent four years as a Justice Department lawyer in Washington working in the environmental torts section of the civil division.

From 1995 to 2006, she was a practicing attorney in Phoenix, where she said her work focused on “complex litigation in Comprehensive Environmental Response, Compensation, and Liability Act (CERCLA) cost recovery actions and toxic torts.” CERCLA is better known as the Superfund environmental cleanup law. She said she also worked on personal injury medical malpractice, intellectual property issues and more.

She became an assistant U.S. attorney in Phoenix in 2006 and was named a federal magistrate in 2012. In 2017, she applied to be considered for a list of potential district or circuit court judgeships being created by Arizona’s then-Sen. John McCain and Jeff Flake, who forwarded her name to the White House in 2018.

In introducing her to the Judiciary Committee, Flake said in a written statement that Bade had issued more than 14,000 orders or recommendations from the bench, presided over four trials and had “support across the political spectrum from her superiors, colleagues, clerks, and former professors.”

Her actual confirmation hearing was a brief affair, lasting only about 18 minutes – most of which were taken up by the other nominee who was before the committee.

Crowds packed the steps of the Supreme Court on Friday after learning of the death of Justice Ruth Bader Ginsburg, a leader of the court’s liberals. (Photo by Caroleina Hassett/Cronkite News)

Candles outside the Supreme Court honor the late Justice Ruth Bader Ginsburg, whose admirers often referred to her by the shorthand “RBG.” (Photo by Olivia Munson/Cronkite News)

A makeshift memorial blankets the plaza in front of the Supreme Court on Saturday, a day after the death of Justice Ruth Bader Ginsburg. (Photo by Joycelyn Cabrera/Cronkite News)

Part of the memorial that showed up at the Supreme Court in a spontaneous outpouring of grief for Justice Ruth Bader Ginsburg, who died Friday. (Photo by Mythili Gubbi/Cronkite News)

The death of Justice Ruth Bader Ginsburg gives Republicans a chance to establish an overwhelming conservative majority on the court. (Photo by Claire Chandler/Cronkite News)

In response to written questions from Sen. Dianne Feinstein, D-Calif., about abortion, gun control, same-sex marriage and more, Bade she would follow the law and any precedent set by the Supreme Court. She did say that Roe v. Wade and Obergefell v. Hodges, which recognized the rights abortion and same-sex marriage, were settled law.

The Senate confirmed her to the circuit court on March 26, 2019, by a 78-21 vote, with Arizona Sens. Kyrsten Sinema, a Democrat, and Martha McSally, a Republican, voting to confirm Bade.

The 9th Circuit website shows that Bade has written just five published opinions since joining the court, the most high-profile of which may have been IMDB v. Becerra. That upheld a lower court that had overturned a California law prohibiting sites, like IMDB, from publishing the ages of actors, which Bade called a violation of the First Amendment right to free speech.

While she is on the president’s short list, Blackman cautioned against putting too much stock into that, noting that Trump’s two nominees so far – Justices Neil Gorsuch and Brett Kavanaugh – were not on his first list in 2016.

“If Trump wants someone not on the list, he’ll just make another list. So, you know, it doesn’t mean all that much to be on the list right now,” he said.

Whatever happens with the list will likely happen quickly, despite Democratic arguments that the Senate should wait until the next president is elected – as it did in 2016, when Senate Majority Leader Mitch McConnell blocked President Barack Obama’s nominee for almost the entire year.

McConnell said in a statement Friday that Trump’s nominee “will receive a vote on the floor of the United States Senate,” and Trump tweeted Saturday that Republicans have an obligation to act “without delay.”

While some Senate Republicans have indicated they would prefer waiting, McSally tweeted Friday that “This … Senate should vote on President Trump’s next nominee for the U.S. Supreme Court.”