In sports, Puerto Ricans have historically excelled in baseball and boxing. The U.S. territory in the Caribbean has produced world-class fighters like Miguel Cotto and Wilfredo Gomez and produced some of the biggest stars on the diamond, including Roberto Clemente and Ivan “Pudge” Rodriguez, who inspired a generation of current stars that includes Javier Baez, Carlos Correa and others.

American football is one sport in which Puerto Ricans have not made much of a mark.

Steven Ortiz Jr., a talented senior cornerback at Desert Edge High School in Goodyear, hopes to help change the perception Puerto Ricans have about football and elevate the sport in the eyes of young people there. 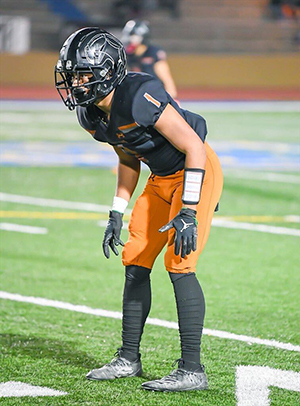 Steven Ortiz Jr. lines up ready to defend before a play. (Photo courtesy of MaxPreps)

Ortiz received scholarship offers from more than 20 major college football programs before committing to the University of Minnesota.

“Steven is looking to change people’s minds that Puerto Ricans should just stick to baseball and boxing,” said Steven Ortiz, father and coach of the younger Ortiz. “It is about working hard and dedicating to put in the work. When people see Steven, I hope they can see they can play at a big program and be successful.”

Ortiz Jr., who began to make a name for himself when he made the Desert Edge varsity team as a freshman, describes himself as a “hard working, hard hitting, physical and grimy” player. He compares his game to that of Los Angeles Rams All-Pro Jalen Ramsey.

He started to showcase his ability during his sophomore year. In 11 games, Ortiz Jr. totaled 29 solo tackles, 28 assisted tackles, five interceptions and two fumble recoveries. His production caught the attention of a few colleges, but it was last year as a junior when he broke out with 52 solo tackles, 31 assists, an interception, six passes deflections, two forced two fumbles and one fumble recovery. Suddenly, he had the attention of recruiters across the land.

That big season made the 5-foot-11, 175-pound speedster one of the most highly recruited cornerbacks in the nation, and the fifth-ranked recruit in the state, according to 247sports.

247sports Mountain Region Recruiting Analyst Blair Angulo would described Ortiz Jr. as,
“Lean, muscular build and strong lower half and he should be able to add some weight and maintain quickness,” Angulo said. “Stingy defender who thrives in one-on-one battles. Comfortable in space and sticks to receivers in and out of their breaks with very good ball skills. Competitive play-maker with the straight-line speed to blanket his side of the secondary. Instinctual corner who can fill various roles in the defense.”

After receiving offers from 22 schools, including Washington and Oregon of the Pac-12, Houston and Minnesota, Ortiz Jr. committed to the Golden Gophers.

Now, as he begins his senior season, Ortiz Jr. is catching the eyes of the national media, specifically Sports Illustrated, where he made the SI99 Preseason Football Prospect Rankings at No. 89 and was ranked the nation’s third best nickel corner in the class of 2021.

His decision to attend Minnesota initially shocked his father, but after learning more about the program and Minnesota coach P.J. Fleck, who was named Big Ten Coach of the Year in 2019, the senior Ortiz understood his son’s decision.

“It was a surprise for me early on because he had 20-plus offers, but it is all about fit for Steven,” he said. “It is a culture that he feeds off of, especially the way that coach Fleck is, because they grind for everything. And they started off as a smaller program but now have built a great culture that is seeing many successes and fits what Steven does.”

“I wanted to go somewhere where they had the best communication, and I love Coach Fleck. He is like another dad for me, and that team is like my brothers.”

As kids grow up, it is easy for most of them to admire an athlete and see a bit of themselves in them. A young player in Texas, for example, might aspire to be the next Patrick Mahomes, who was a standout at Texas Tech before becoming a star in the NFL as quarterback of the Kansas City Chiefs.

However, the small representation of Puerto Ricans playing in the NFL made it difficult for kids from the island to envision playing the sport.

Then along came Cruz, who had over 4,500 receiving yards during his NFL career (2010-2017), made one Pro Bowl and won a Super Bowl championship ring with the Giants. The former NFL receiver inspired the youth on the island, proving that it was possible to have a career playing the sport.

“I was watching him (Cruz) as a kid at the age of 8 or 9,” Ortiz Jr. said. “And he is Puerto Rican in the league, and I have not seen one before, so that was big motivation.”

Cruz and Alonso serve as the only Puerto Ricans to have successful NFL careers, but when it comes to baseball there are many role models, including Clemente, one of the best ever to play the game.

Parents in Puerto Rico who have a child that they want to become an athlete often push them toward baseball or boxing, where they will believe their child will have a better chance to succeed.

“My dad pushed me to play basketball and baseball early on, but I was a tougher guy and I wanted to play football,” the younger Ortiz said. “After that, my dad put all his time and effort into me playing football, taking me to training and anything I needed to become successful. So that was a big motivation for me.”

Education can be a barrier for aspiring football players from the island. In baseball, players can go directly from high school into professional organizations, where their academic standing isn’t a factor. Earning a college scholarship, which is a necessity to advance in football, requires a strong academic base.

Education in Puerto Rico is slowly improving, but it’s not at the level of the U.S. public school system. A 2013 study showed that eighth-grade students in Puerto Rico’s public schools scored 23 percent below the U.S. average, and also showed that 89 percent of fourth graders and 95 percent of fifth graders were below the basic level of math levels and other subjects, according to World Education News and Reviews.

The other option is private schooling, which does well on the island. However, a private education is more expensive and many prospective athletes can’t afford it. Only 694 high school graduates from a population of 3.2 million in Puerto Rico went on to college either abroad or in Puerto Rico, according to the Hechinger Report. Many of those attended private schools.

In baseball a player can sign a minor league contract with a major league organization at age 16 and immediately enter the team’s farm system. That path is easier – and more familiar – for Puerto Rican kids. 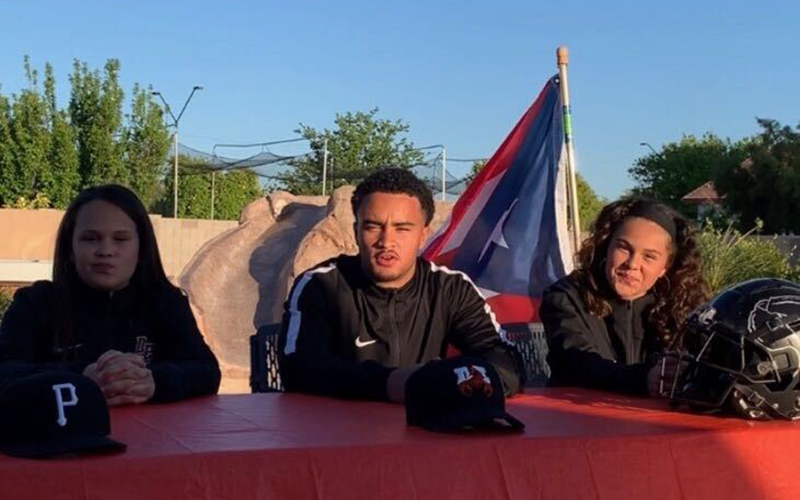 Steven Ortiz Jr. signs his commitment letter to Minnesota alongside his two sisters and the Puerto Rico flag behind him (Photo courtesy of Steven Ortiz Sr.)

Also, many students decide to drop out of school for various reasons, including to help support their family – something the Ortiz family experienced first-hand.

“My dad had a third-grade education and my mom just finished high school,” Ortiz Sr. said, “He was always working, and I barely got to see him. But he did it for us, working those two, three jobs was for us to make it farther than he did.”

For many Hispanic and Latino communities, family is everything. It is Ortiz Jr.’s foundation.

“He is very family-oriented and loves to see his family and loves to be around them at all times,” his father said. “It is important to him to see family at his games and (that) they try to go to his games.”

Ortiz Jr. said his family has taught him valuable lessons and is a huge motivation when he takes the field.

“I learned so much from my family, especially my dad,” Ortiz Jr. said. “He pushed me so much, and I feel like I want to make it far for him and the whole family.”

Not only does he want to succeed for his family, he wants to do it for Puerto Ricans everywhere.

“It is my culture, and I am going to represent it each time I play because they are my family,” Ortiz Jr said. “I have a big target on my back, and they are all looking up to me …things like my grandpa having a third-grade education motivates me even more to make it.”

The Puerto Rican aspect of Ortiz Jr. gave him valuable traits that he believes will help make him successful.

” I am always 45 minutes early to practice and always going to work hard,” Ortiz Jr. said. “Everything will come from hard work and I always have energy, too, so I think that has to do with my Puerto Rican side.”

The Ortiz family knows it won’t be easy for Steven to make it to the NFL. It’s not easy for any player who holds such a lofty goal.

“It’s not just a race and culture thing,” Ortiz Sr. said. “There are always going to be those obstacles, but Steven (Ortiz Jr.) is here to prove you can do it, even as a Puerto Rican.”