PHOENIX – As researchers race to produce an effective COVID-19 vaccine, medical professionals are urging Latinos and Black people, who are at higher risk of contracting and dying from the disease, to participate in clinical trials.

But because of a long history of racism and unethical experimentation, people of color may be hesitant to roll up their sleeves.

As of Wednesday, Moderna, one of the companies conducting clinical trials as part of the U.S. Department of Health and Human Services’ Operation Warp Speed, reported that 28% of its more than 25,000 participants were from communities of color. Pfizer reports 25% of its U.S. participants are from diverse backgrounds.

For a vaccine to be effective, public health experts say, trials should have participation reflective of the makeup of the country – and nonwhite people make up about 40% of the country’s population older than 18, according to the Census Bureau.

Because Black, Native American and Latino people are all nearly 3 times more likely than white people to contract the coronavirus that causes COVID-19, experts say coronavirus vaccine trials must reflect that overrepresentation.

“We are bearing the significant brunt of this,” said Emmanuel Peprah, an assistant professor of global health at New York University and former National Institutes of Health official.

“A lot of African Americans, Black and brown people have died from this coronavirus. If we do not participate in a large enough sample size so that we’re representative, we won’t know how these various vaccines will interact with us and give the clinicians … enough data.”

Peprah and others said it’s important to have diverse participants to determine how the vaccine might result in side effects depending on age, genetic makeup, additional medical conditions, or medications taken. 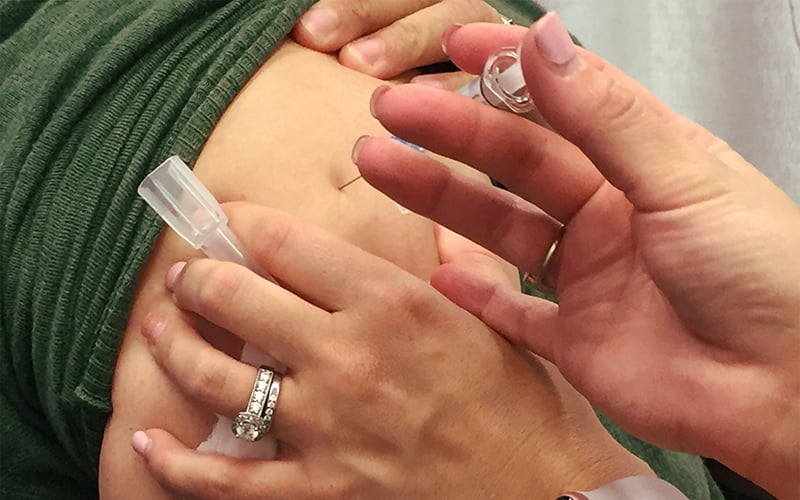 People of color disproportionately experience high blood pressure, asthma, obesity, diabetes and heart disease – ailments that are among the most common contributors to deaths of people with COVID-19.

They are diseases whose prevalence in communities of color often is a byproduct of structural inequalities, such as living in food deserts or near environmental waste sites. These inequalities are what Mutyala and Peprah say are big contributors to higher rates of COVID in minority populations.

“Many of these front-line workers that had to interact with people on a day-to-day basis were more susceptible to catching that virus from people who were asymptomatic,” Peprah said. “So you have these individuals that are unintentionally spreading the virus because they don’t know they have it. And then you have front-line workers who could not stay at home for various reasons.”

Public health experts have increasingly called for minority representation in these vaccine trials. Presidents of two historically Black universities in New Orleans have joined the ranks and gone as far as participating themselves to encourage others to join.

“The people and communities we serve look to us as an example. Our participation in such studies will help find ways to better fight the pandemic,” Walter Kimbrough of Dillard University and C. Reynold Verret of Xavier University of Louisiana wrote in a joint letter.

The COVID-19 Prevention Network – created by the National Institute of Allergy and Infectious Diseases at the NIH – has released a series of television ads featuring people of color to encourage minorities to participate.

“Even when things look bleak, we know that someone is full of hope and strength and wants to take action,” says one ad that features Black and Latino people, many in essential worker jobs. “Someone that will roll up their sleeves, because that’s what they always do.” 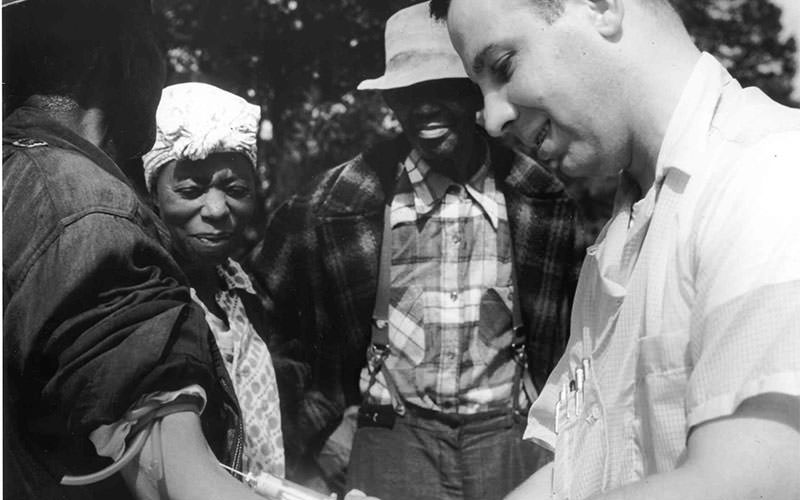 In the Tuskegee Syphilis Study, which lasted 40 years, researchers left hundreds of Black men untreated so they could observe the disease’s toll on the body. Such unethical experiments have left some communities of color reluctant to join clinical trials for a COVID-19 vaccine. (Photo courtesy of National Archives Atlanta)

However, with a long history of wrongs etched into these communities’ memories, vaccine researchers are having a hard time recruiting Black and brown people who express distrust in the medical system.

“You can’t divorce where we’re at in 2020, with COVID-19, from what has been historically discriminatory acts that have been perpetuated on Black and brown people,” Peprah said.

The skeptical most often point to the federal “Tuskegee Syphilis Study,” which began in 1932 and lasted 40 years. Over the decades, researchers in Alabama let hundreds of Black men go untreated so they could observe the toll the disease took on the body. The men were told they were getting help. Instead, they suffered from a disease that, for the final 25 years of the study, had a cure.

Beginning in 1946, the U.S. government also conducted studies in which more than 5,000 Guatemalans were injected – without their consent – with bacteria that causes sexually transmitted diseases.

Protocols have since been put in place to make it safer for people to participate in scientific trials, including informed consent – the idea that a patient must know what’s going on and give his or her permission.

“If a person who’s recruiting you for a vaccine trial is not willing to sit with you and give you a chance to read it, have you discuss it, and then answer any questions you might have, that’s a trial you don’t want to be a part of,” Peprah said.

Examples of unethical experimentation, along with a polarizing political climate, contribute to an atmosphere of mistrust that’s left some reluctant to participate in COVID-19 trials.

In a Sept. 8-10 poll released by OH Predictive Insights, only 38% of Arizonans said they would get a COVID-19 vaccine, even if it was free.

Gloria Borboa, a Mexican American woman living in Phoenix, said she would not take part because the development process feels hurried and politicized.

“For me, it’s very soon for it to have come out,” Borboa said in Spanish. “I feel that the president is rushing for it to be ready before the elections and to gain votes that way.”

Antonio de la Torre, a Mexican American health insurance agent in Phoenix, won’t participate either, but for him, it’s more of a cultural issue.

“I don’t want to speak for everyone, but a lot of people that I know, we will not go to the doctor, we will not take a shot, we will not do something if you don’t need it,” he said. “So it kind of makes sense in our culture. It’s like: Why get a shot if you’re not sick?”

Mutyala said even those who are willing to join the trials may not have access. Participation often requires multiple doctor’s visits, which is a challenge for rural Native American communities. Earlier this week, Navajo Nation President Jonathan Nez announced vaccine trials would start on the reservation this month.

Setting up a clinical trial requires infrastructure that many free or low-income clinics may not have. And while protocols have been implemented to ensure the studies are ethical and participants kept safe, these protocols have also created significant red tape that makes participation harder for smaller clinics that serve minority populations.

“COVID-19 has really exposed the inequities that exist within Black and brown communities, in terms of equal access to health care and then also differential treatment when you have access to health care,” Peprah said. “But these things and, in turn, COVID-19 are part of a larger societal issue, and it’s something that cannot only be dealt with within the medical community.”