The official name is “Commitment March,” calling for a recommitment to the ideal of Martin Luther King’s “I have a dream” speech but the full name includes “Get Your Knee Off Our Necks,” which was evident in abundance on the approach to the rally Friday. (Photo by Cronkite News) 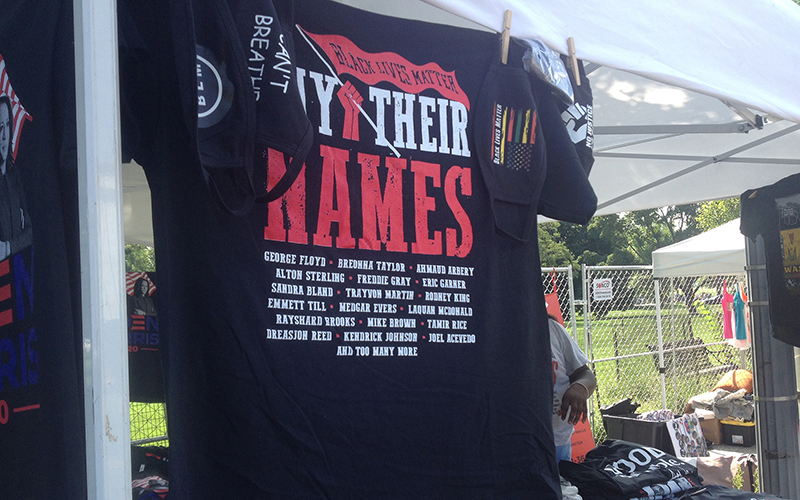 Organizers of Friday’s “solidarity march” in Phoenix said they have their own names to remember: Dion Johnson and James Garcia, killed by police this summer, and of Muhammad Muhaymin Jr., killed in 2017 when a police officer kneeled on his neck. (Cronkite News photo) 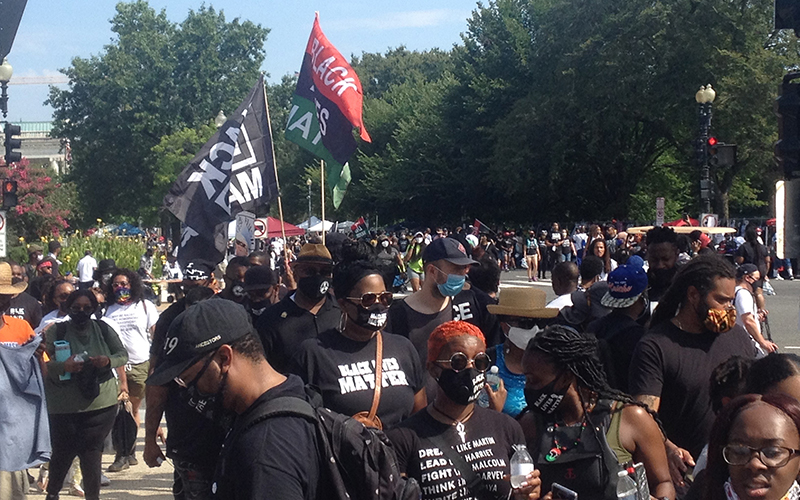 Black Lives Matter flags and signs were in abundance at the Washington “Get Your Knees Off Our Necks” march Friday – as were facemasks. People had to be wearing a mask and everyone got a temperature check before being allowed into the event. (Cronkite News photo)

WASHINGTON – Jacob Raiford said it’s important for Washington to hear the message of Friday’s “Commitment March,” when tens of thousands will gather to call for a rededication to the ideals of Martin Luther King’s “I have a dream” speech.

But it’s just as important for that message to be heard in Phoenix, said Raiford, one of the organizers of Friday’s “March on Washington: Solidarity March in Phoenix.”

The event, set to start at 6 p.m. in City Hall Plaza in Phoenix, is one of several “sister marches” around the country scheduled to coincide with the national march, which is being held on the 57th anniversary of King’s speech. The national march will also be broadcast virtually.

“For those of us who are not going (to Washington), it shows our solidarity across the nation,” said Janelle Woods of Black Mother’s Forum, one of the speakers at the Phoenix event.

Both events were sparked by the May killing of George Floyd at the hands of Minneapolis police – the full name of the D.C. event is “Commitment March: Get Your Knee Off Our Necks” – and the need to draw attention to the systemic racism that continues to plague the country.

Organizers said the problem is acute in Arizona, where Dion Johnson was killed by an Arizona state trooper on May 25 – the same day Floyd was killed in Minneapolis – and James Garcia was shot to death July 4 by Phoenix Police. They also point to the death of Muhammad Muhaymin Jr., who died in 2017 when Phoenix Police officers pressed a knee to his neck, the same way Floyd died. 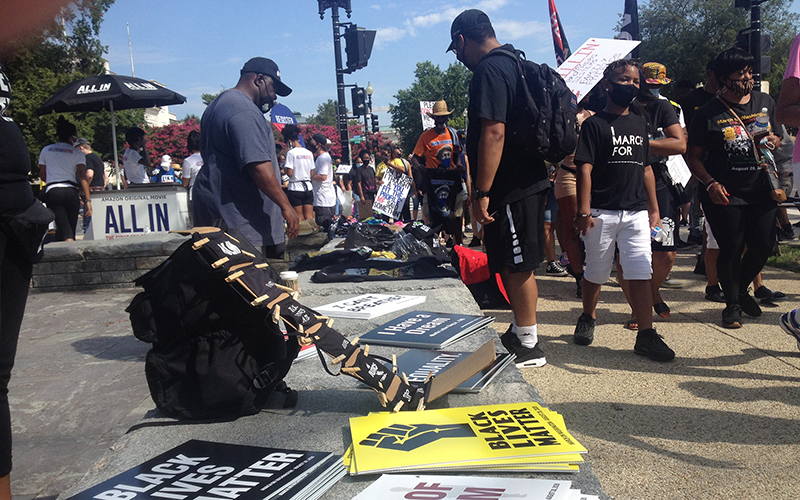 Vendors spread out their merchandise along 17th Street NW in Washington, D.C., as thousands file past on their way to the “Get Your Knee Off Our Necks” rally at the Lincoln Memorial. (Photo by Cronkite News)

“We live in a system that either maliciously or benignly pushes this level of systemic racism to the point where our deaths are justified, our bodies are posthumously vilified, our legacies are demonized,” Raiford said.

In Washington, the Rev. Al Sharpton, Martin Luther King III and an expected crowd of tens of thousands of supporters will meet at the Lincoln Memorial to “restore and recommit” to King’s dream.

The plan for the Washington march came after the death of Floyd, which spurred Sharpton to tweet in June that “for 401 years there were plenty knees on the necks of Blacks who came to this country.”

“Meet us in Washington on August 28, 2020 as we honor the anniversary of the March on Washington and demand America get its knee off our necks,” said Sharpton, whose National Action Network is organizing the D.C. event.

The W.E. Rising Project organized the Phoenix rally to “take the torch and finish what our ancestors started,” said Raiford, the communications director for the project.

The W.E. Rising Project began planning the solidarity event earlier this month. Raiford said it’s important to him that the marches are being held on a historic date and acknowledge earlier civil rights leaders.

“It meant a lot to see young Black Americans galvanized around the idea of changing the system of oppression,” Raiford said of the original March on Washington in 1963. 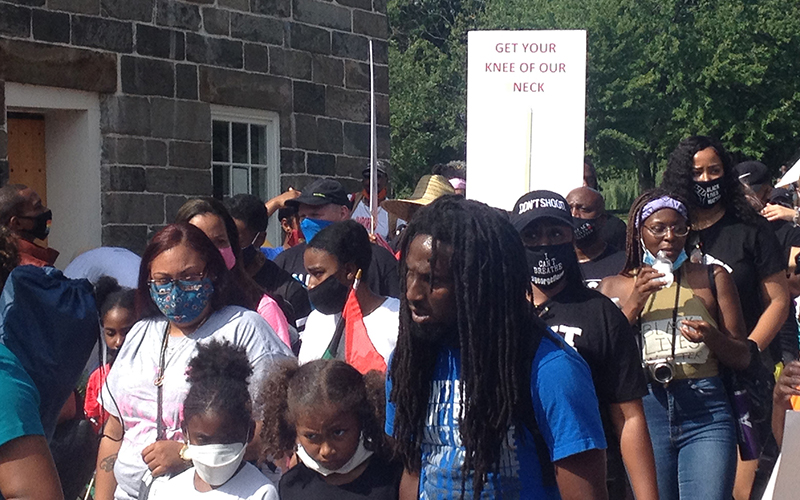 People on their way to the “Get Your Knee Off Our Necks” rally in Washington, to protest police violence on the 57th anniversary of Martin Luther King’s “I have a dream” speech at the Lincoln Memorial. (Photo by Cronkite News)

While they will not be in Washington, organizers of the Phoenix said they will be there in spirit.

“People are going to show up and speak to the validity of their life,” Woods said of the Phoenix event.

While Raiford expects a good turnout, he also expressed concerns about possible confrontations with counter-protesters, who he said have been showing up at W.E. Rising events in growing numbers recently.

After two people were killed Tuesday at a Kenosha, Wisconsin, protest against the police shooting there of Jacob Blake, organizers of a Black Lives Matter rally in Phoenix canceled a Wednesday event, citing threats against them.

As a mother, Woods expressed the need for an adult and authority presence at gatherings in order to keep younger individuals participating safely. She wants to protect them in the moment but also ensure the future generations never experience these “racist systems.”

“You have to carry that mantle of humanity. This is not a civil rights issue, this is a human rights issue,” Woods said.

But no matter what happens, she said, the struggle will not stop.

“We are going to keep moving, we are not going to get weary,” she said.