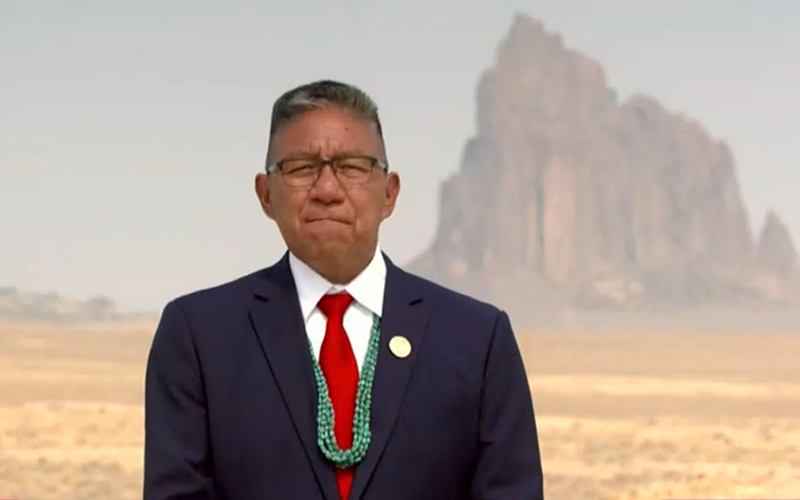 WASHINGTON – If anyone thought it strange that the top two elected officials in the Navajo Nation were speaking at competing political conventions, Navajo Vice President Myron Lizer said they have not been paying attention.

“There’s no secret we are a split ticket,” Lizer said during a Navajo town hall Tuesday with President Jonathan Nez. “We are working both sides, and we are well represented in Washington.”

In a prerecorded prime-time speech, with Shiprock as a backdrop, Lizer credited President Donald Trump with improving relations between federal and tribal governments.

“For years, we’ve fought congressional battles with past congressmen and senators that were part of a broken system that ignored us. That is, until President Trump took office,” Lizer said in his convention address. “Whenever we meet with President Trump, he has always made it a priority to repair the relationship with our federal family.”

Nez did not touch on tribal affairs in his speech to the DNC, instead focusing on encouraging support for Democratic nominee Joe Biden. But in comments to Cronkite News before the speech, Nez left no doubt that he and Lizer have vastly different opinions about Trump and his administration.

“Tribes have been pushed aside by this administration,” said Nez, who said the difference in how the Trump and Obama administrations handle tribal relations was “night and day.” He noted that tribes had to sue the current administration to get their share of funding under the Coronavirus, Aid, Relief and Economic Security – or CARES – Act.
But Lizer credited Trump for delivering “the largest financial funding package ever to Indian Country.”

Navajo president speaks at convention as one of Democrats' 'rising stars'

“The $8 billion in CARES Act funding to Indian County was a great start in alleviating the devastating effects that the COVID-19 pandemic has inflicted on our Indian tribes,” he said. “The Navajo Nation once led the nation in per capita positive cases because of the health disparities that previous administrations failed to improve.”

Lizer ran through a list of what he saw as other administration successes, including the creation of a task force on missing and murdered Indigenous women and by “nominating strong conservative judges like (Supreme Court Justice) Neil Gorsuch, who supports Native American rights.”

While Lizer and Nez have different perspectives, those differences don’t seem to spill over into their work lives: The two men often appear together, they issue tribal statements under the president’s and vice president’s names and they even share a Facebook account for their offices.

Bill Scheel, partner at Javelina Consulting, said it’s not unusual for Navajo presidential tickets to be split ticket, and not surprising.

“I really think, from a Navajo perspective, it makes sense,” Scheel said. “So much of their fate is tied up with the federal government, so they really need to maintain good relations with both parties.”

Nez told the Arizona Republic last week that Democrats take the party affiliation of Navajos for granted at their own risk.

“I think there’s a perception out there that Native Americans always vote Democrat, and because of that, there’s no need to do outreach,” Nez said. “I beg to differ. Now, more so than ever, Native communities throughout the country are important. It may be the swing vote.”

Lizer, who was one of the first speakers at Tuesday’s RNC, said that’s true at all levels of government.