While Colombians, Venezuelans, Cubans and Haitians have been coming to Panama for a number of years, the arrival of Nicaraguans is a relatively new trend. (Photo by Marcus Xavier Chormicle/Cronkite Borderlands Project)

PANAMA CITY, Panama – Panama, through which tens of thousands of migrants pass each year on their journeys north, is increasingly becoming the destination for Nicaraguans who have chosen to seek refuge by moving south.

Since the U.S. has tightened immigration restrictions on its southern border, migrants have sought alternative locations such as Panama and Costa Rica, two of the more stable and prosperous countries in Latin America. While Colombians, Venezuelans, Cubans and Haitians have been coming to Panama for a number of years, the arrival of Nicaraguans is a relatively new trend.

Nicaraguans are “the nationality that has requested refugee status the most in 2019 and so far in 2020,” Pitty said.

The increase in Nicaraguans coming to Panama in the past two years is largely linked to human-rights violations and violent clashes between government forces and protesters opposing the regime of President Daniel Ortega that began in April 2018.

In March, the UNHCR, the United Nations’ refugee agency, reported that more than 100,000 Nicaraguans had fled the country, with 77,000 crossing into Costa Rica to request international protection. According to UNHCR, just over 8,000 Nicaraguans have fled to Panama.

As Costa Rica became overwhelmed, Panama started to see overflow into its system. At the same time, countries throughout Latin American, including Panama, have been providing refuge to millions of Venezuelans who have fled their country amidst political and economic turmoil since 2015.

“Throughout all of Latin America, the refugee systems were saturated,” Pitty said. 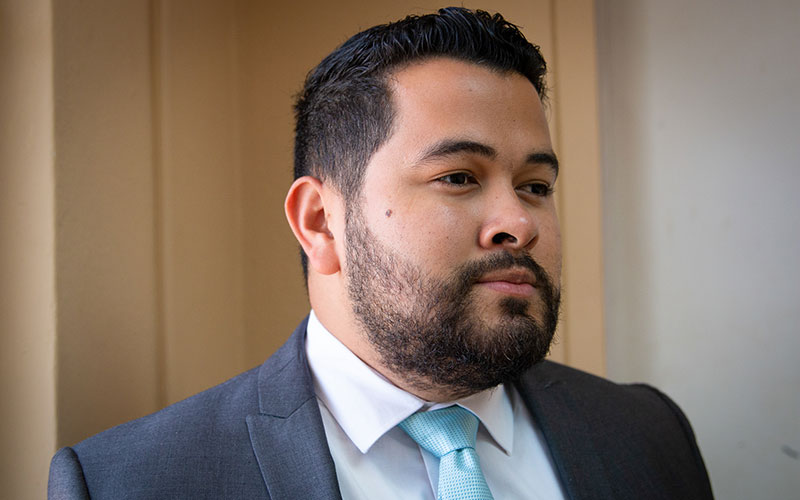 Hussein Pitty is the director of the National Office for the Care of Refugees in Panama. His office has backlog of over 16,000 requests for refugee status, for which he hopes to streamline the process. (Photo by Katherine Sypher/Cronkite Borderlands Project)

In total, more than 20,000 people have requested refugee status in Panama through Pitty’s office since 2018, the first step in the process. That is significant for such a small country that has traditionally served as a pathway for migrants headed to the United States.

The process from start to finish can take years, during which time migrants are allowed to stay in Panama. Migrants must apply within six months of arriving in the country.

The process is complicated: One must first be admitted for consideration, then go through the process of becoming recognized as a refugee, eventually going before Panama’s National Refugee Commission, the body that makes the final decision. The first phase of admission falls to Pitty’s agency in the convoluted process. The government can deny anyone at any point during the process.

The UNHCR set the definition of “refugee” in 1951, and the group amended it in 1967. The definition states that a refugee is someone with “well-founded fear of being persecuted for reasons of race, religion, nationality, membership of a particular social group or political opinion” in their home country.

Pitty determines whether migrants meet those criteria. He said he hopes his office can streamline the process to get through as many requests as possible.

Panama is a relatively stable and prosperous country in the volatile Central American region. Panama boasts a gross domestic product per capita of $15,575, the highest in the region, according to the World Bank. For comparison, Nicaragua has a GDP per capita of $2,028, and the U.S. is $62,794 per capita.

The Panama Canal provides work opportunities and pushes the country’s standard of living higher than that of its neighbors.

Adolfo Leyva, a professor of international affairs at Florida State University’s Panama campus, has been living in Panama City for more than 15 years. “Panama has always been very international,” he said. “It’s a real melting pot.”

One of Leyva’s students, Marcela Espinoza, is from Nicaragua.

“I find it difficult to find Panamanians,” Espinoza said. “Everyone is from Colombia, Venezuela and all these countries that have these problems.”

Espinoza’s father works for UNICEF in Panama, and their family has been in the country for more than six months.

Given its melting pot status in Central America, Panama is host to migrants of all socio-economic levels.

Hogar Luisa is a Catholic-supported shelter in Panama City, providing basic necessities to migrants with nowhere else to turn.

“We are a society that is not very understanding of the situation,” said Jorge Luis Ayala, director of Hogar Luisa. “It leads me to commit myself as part of the church and as a person to work with this population with which not everyone works.” 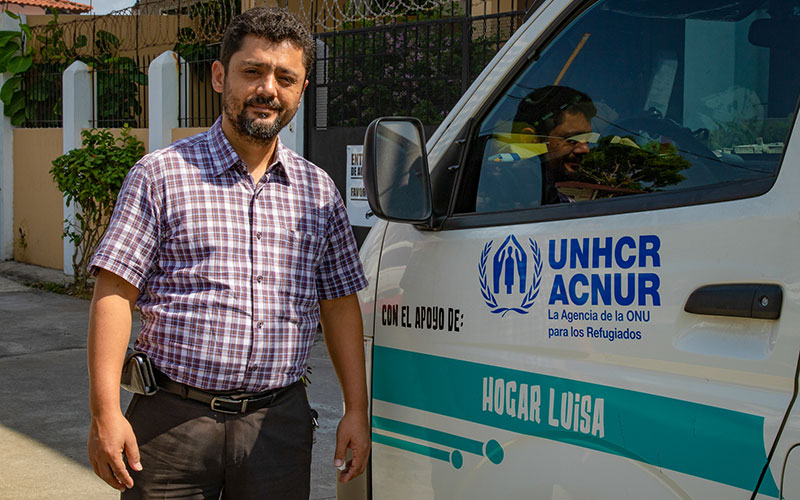 Jorge Luis Ayala is the director of Hogar Luisa, a Catholic shelter for migrants in Panama City. The shelter runs on a shoestring budget, supported by UNHCR and charitable contributions. (Photo by Luke Simmons/Cronkite Borderlands Project)

Since its establishment in 2013, the shelter has hosted migrants from more than 30 countries. UNHCR supports the shelter’s three workers, including Ayala, a social worker, and a weekend caretaker. Hogar Luisa also receives regular donations from churches and individuals for supplies and other operational costs.

Ayala has his finger on the pulse of migration patterns within Panama, based on the nationalities of migrants coming through the shelter at any given time. In recent years, Nicaraguans, Colombians and Venezulans have been the most common nationalities using the shelter, Ayala said. All three countries have massive internal conflicts that have displaced millions in the region.

Aaron Hernandez, a cheerful 23-year-old with an athletic build, has been living in Panama since July 2017, when he left Nicaragua. He came to Panama to compete in marathons and other running events hoping to win money to send back to his wife and young child.

Hernandez’s running career in Panama ended as his six month Panamanian visa did, but he stayed to look for other work opportunities he wouldn’t have in Nicaragua. 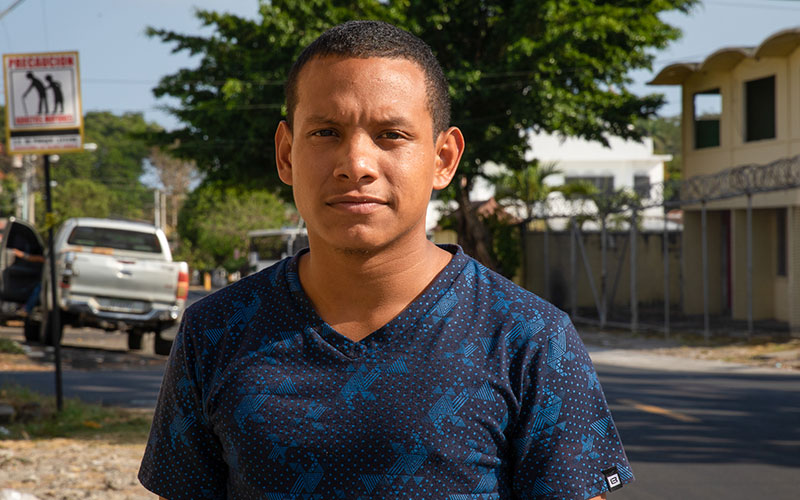 Aaron Hernandez came to Panama to run in competitions, sending money to his family back in Nicaragua. Having overstayed his original visa, he works odd jobs around Panama City. (Photo by Luke Simmons/Cronkite Borderlands Project)

Hernandez ended up at Hogar Luisa. Having overstayed his visa, Hernandez is currently undocumented with the Panamanian government, which prohibits him from applying for a work permit and attaining refugee status.

Unable to qualify or pay for work permits, many Nicaraguans work under the table in Panama as caretakers, housekeepers, handymen and construction workers.

Leyva, the professor at FSU, hired Ana Maria Castillo, a 32-year-old Nicaraguan woman, to take care of his aging mother-in-law. Castillo came to Panama over two years ago for economic reasons. “There is very little work in Nicaragua,” she said.

In Nicaragua, Castillo worked for a banana packing company for minimal wages. “The worker’s salary never goes up,” she said. 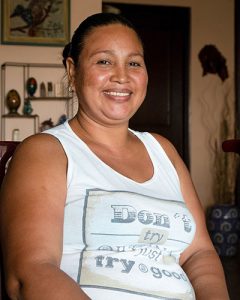 Castillo’s sister, who had been working in Panama for a number of years, told her the work opportunities were better in Panama. With her two children still in Nicaragua, Castillo sends money back home: $100 can feed both her children for a month.

Castillo came to Panama on a six-month tourist visa. Having overstayed that visa, she is considered “irregular” or undocumented. If she wanted to return to Nicaragua, she would have to pay a penalty of $50 for each month she overstayed to the Panamanian government, a total of over $1,200.

However, Castillo has an advantage: She is engaged to a Panamanian citizen. Once married to a citizen, she erases her penalties and can become a legal resident of Panama. She hopes to bring her son and daughter to Panama when she becomes fully “legalized.”

Marcela Espinoza, the international affairs student at FSU Panama, and her family left Nicaragua before the violence erupted. Some of her family members had to flee to escape the government crackdown, heading to Costa Rica, Mexico, the U.S. and Panama.

Espinoza will spend four more years at FSU in Panama before graduating. “After I’m done, I think I’ll miss this place,” she said of Panama. “But at some point … I want to go back to Nicaragua and visit my (extended) family.” 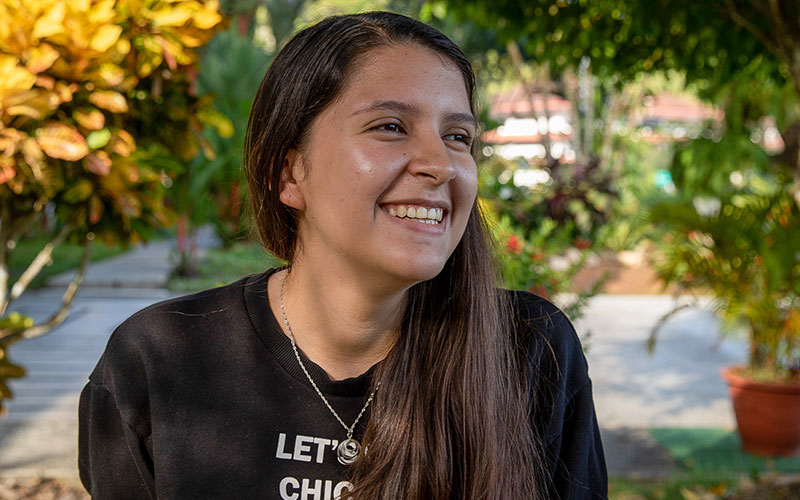 Marcela Espinoza is an international affairs student at Florida State University in Panama. Originally from Nicaragua, she hopes to go to law school and study international law. (Photo by Luke Simmons/Cronkite Borderlands Project)

As Hernandez, looks toward the future, he remains hopeful. Panama “has given me great opportunities,” Hernandez said. “So I feel grateful to the country and blessed.”

The hopes and dreams of immigrants are universal. The stories of people like Hernandez and Castillo are reminiscent of those in the United States: They seek a better life.

Ayala of Hogar Luisa hopes the church will develop more capacity to work with migrants. He said immigrants have historically been a key to Panama’s development as a country: “We, like the United States, are a nation built from migration.”