Laura Garcia with students at Santa Clara Elementary School in a photo from November 2019. Schools have been shut down since March by COVID-19, but would have to be open again in person for at least some students on Aug. 17, the state said this week. (Photo by Mara Friedman/Cronkite News)

PHOENIX – Arizona schools must open their doors to at least some of their students on Aug. 17, state officials said Thursday, but districts will have the flexibility to offer alternative schooling to students who want to stay home.

The announcement by Gov. Doug Ducey and State Schools Superintendent Kathy Hoffman follows weeks of uncertainty for school officials around the state, many of whom called the Aug. 17 reopening – already delayed two weeks – unrealistic and unsafe.

“School leaders and educators are under a tremendous amount of stress as they plan for the upcoming school year,” Hoffman said. “I cannot ask our educators and families to enter this school year without critical assurances, policies and resources to set them up for safety and success.”

Educators welcomed the funds, but were still struggling with the logistics of reopening, such as how they can secure enough sanitation materials to ensure students’ wellbeing.

Dawn Penich-Thacker, communications director for Save Our Schools Arizona, said Thursday’s announcement offered little guidance for in-person schooling and left more questions unanswered. She said 10 days is not enough time for teachers and parents to prepare.

“Everything today was just so incredibly disappointing,” Penich-Thacker said. “It’s anybody’s guess which of the multiple benchmarks they’re going to choose from, and then all the procedural questions will follow that.”

But Chris Kotterman, director of governmental relations for Arizona School Boards Association, welcomed the flexibility in the order.

“We want them to get it right and we want to have confidence that the measures are appropriate, and if we need to tweak them, we’ll tweak them as we go and as situations change,” Kotterman said. “That’s what this is all about, we need to be able to adapt to the situation as it unfolds.”

The order said schools should start on their regularly scheduled first day, with distance learning, to allow students to get the required 180 days of schooling in. Many school districts have already announced plans for fall — some are trying hybrid approaches with some students in the classroom and others learning from home, while some have announced completely online models.

Kotterman said the districts that represent the majority of students in the state realized Aug. 17 was not realistic for a full in-person opening and have begun the transition to online or hybrid learning.

The latest plan reversed a previous policy that would have reduced per-pupil funding to schools by 5% for each student who was learning online. Now, schools will not be penalized for those students but will get a 5% bonus for each student who attends classes in person.

Penich-Thacker said the per-pupil funding shift was one “bright light” in a proposal that was otherwise lacking.

Still, it came as a relief to Tucson Unified Superintendent Gabriel Trujillo, who said during a press call Thursday that his district, the second-largest in Arizona, faced about a $4 million cut under the previous formula.

But schools face other challenges. Trujillo said superintendents were recently informed that insurance does not cover COVID-19.

“Every school is now wide open to be responsible for any lawsuit that anyone wages against them in terms of someone getting sick or their family member getting sick or anything else,” Penich-Thacker said. “The fact that none of that was addressed in today’s announcement was appalling.” 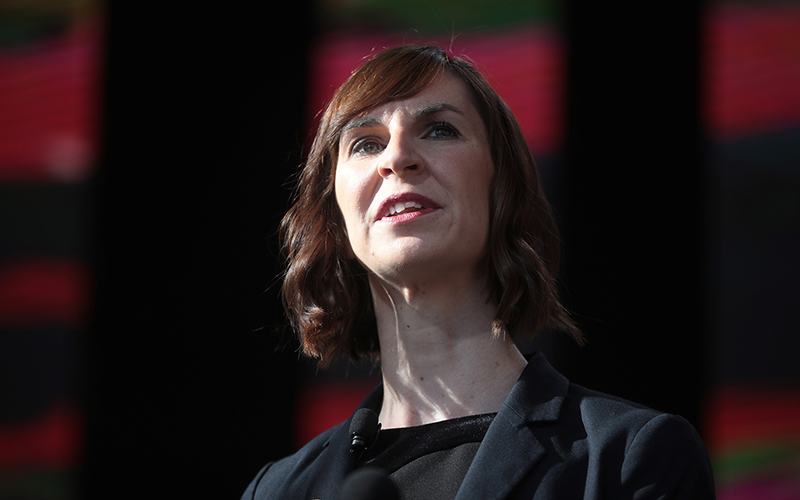 Arizona Schools Superintendent Kathy Hoffman said school officials “are under a tremendous amount of stress as they plan for the upcoming school year” in the face of COVID-19. (Photo by Gage Skidmore/Creative Commons)

“My school has one counselor for over 3,000 students,” Aguirre said on the press call. “We do not have the ability to meet the social and emotional needs for traumatized students if our siblings, teachers, friends, parents or grandparents start to die because we infected them with our on-campus exposure.”

The push to reopen schools also did not sit well with 11 mayors, including Phoenix Mayor Kate Gallego and Tucson Mayor Regina Romero, who signed a letter Thursday urging Ducey to delay the start of in-person classes.

“Although school districts in our communities are working hard to mitigate risks, COVID-19 is still widespread and in-person instruction should be delayed,” the letter said. “The sooner we are able to effectively curb the spread of COVID-19, the sooner we can safely send our children back to school.”

On the other side of the argument are working parents who have no place to send their children when they go to work.

“What we’ve been dealing with is a clash of interests, we have employees saying ‘We’re scared, we don’t want to come back,'” Trujillo said. “But then you have the parents saying, ‘What about us, we actually have to work. Some of us have two or three jobs. If you close everything down you will cost me my job, or you will be creating an incredibly expensive childcare costs for me.'”

That’s why Hoffman said this plan “is both comprehensive and flexible and will allow schools to adapt to the unique public health needs of their communities.”

Michelle Capriotti, a teacher in the Chandler Unified School District, said she wants nothing more than to be back in the classroom with students, but no one’s life is worth the risk.

“Typically this is the time of year we’re putting up a great new bulletin board we found on Pinterest,” Capriotti said. “This year, teachers are writing wills.”