“It put me on my butt for a good week,” he told Stadium on Wednesday. “I slept for four days straight.”

Baynes revealed Wednesday he had tested positive for COVID-19 after it was reported Monday by the Arizona Republic that he was one of four Suns players that didn’t make the trip to Orlando with the team. Ricky Rubio, Elie Okobo and rookie Jalen Lecque were the others.

His family members also tested positive, he said, but he suffered the worst symptoms among all of them, which surprised him.

“I haven’t touched a basketball for over 30 days,” he said, adding that “it’s been a long time since I felt good. This morning is the first time I did some exercise.”

As soon as he learned he had tested positive, Baynes self-isolated in his home. His wife would drop him off food but that was the extent of their contact. He said he took staying away from others seriously. 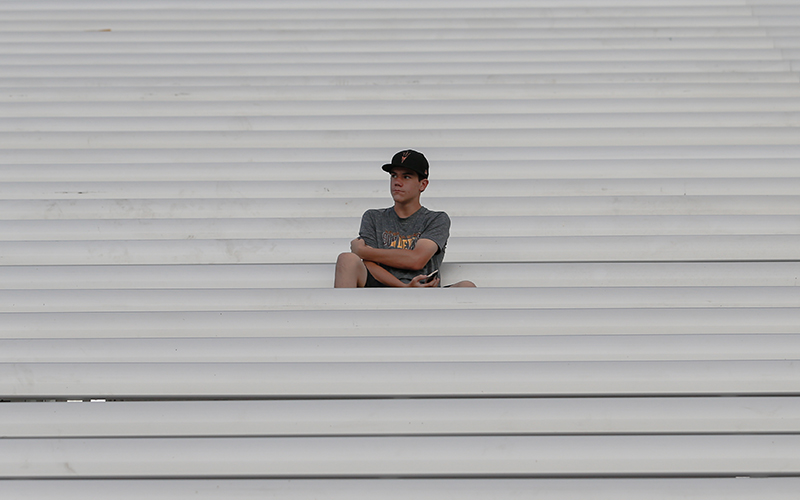 “If I knew someone that was going out and putting my family at risk, I would be very upset with those people,” he said. “There’s no chance I’m doing that to someone else’s family and loved ones.”

Ricky Rubio is in the NBA’s bubble.

After rampant speculation about his whereabouts, it was confirmed the Suns guard was with the team.

Why was he not initially in Orlando?

He tested positive for COVID-19 and was not able to come until he had multiple negative tests. His first practice was Tuesday.

With Rubio healthy and ready to play, the Suns have their starting five in Orlando and are only missing three other players.

“Ricky is the general of our team,” Suns coach Williams said.

Williams was clearly excited to have Rubio back because “he makes everybody better on offense.”

Rubio was glad to return to work but was struggling with being away from family.

When he tested positive, he was in Phoenix while his family was at their home in Spain. With a 6-month-old son, it’s been a challenge.

However, he and the Suns are ready to finally play again.

“We have a chance here to really get better as a team,” Rubio said.

The Suns have their first scrimmage on Thursday against the Utah Jazz. 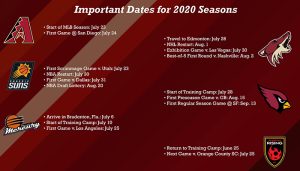 In Bradenton, Florida, where the WNBA is playing during the pandemic, Diana Taurasi and the Phoenix Mercury are nearing a wave of nationally televised games.

Six of the team’s first eight games will be on ABC, ESPN or ESPN2.

Taurasi said she enjoys playing in the national games and added that “it’s a different feel.”
Coach Sandy Brondello believes, “The exposure for us will be fantastic.”

The WNBA has long struggled with lack of exposure and Taurasi wasn’t afraid to share her thoughts.

She added that players put their bodies on the line consistently for the game and that there is not much more they can do.

When the Mercury tip off Saturday, they will be playing the Los Angeles Sparks on ABC. Taurasi spoke highly about multiple Sparks’ players before adding, “The list goes on and on.”

Since it will be only the second WNBA game of the season, the Mercury are expecting plenty of attention on Saturday. Taurasi Isn’t worried.

“The bright lights make the haves and the have-nots.”

Coyotes prepare for no fans

The Coyotes continued preparation for an August 2 matchup against the Nashville Predators by adding zamboni intermissions, official timeouts and music to Wednesday’s scrimmage.

Head coach Rick Tocchet said that some might view these minor changes as “corny,” but they are important when preparing to play in an arena with no fans attending.

“When the puck drops, after the music stops, you’re not going to hear any of the fans screaming and yelling. It’s going to be very dead-quiet,” Tocchet said.

Defenseman Alex Goligoski agreed that the games will be much different without the presence of fans, but emphasized the importance of communication on the ice.

“With no fans in the stands, there’s not going to be those moments where you can’t hear each other on the ice,” he said. “Communication is gonna be huge, and looking out for your buddy and being the eyes for your teammates definitely will help.”

Forward Brad Richardson described fanless arenas as “eerie” because of the typical loud atmosphere in playoff hockey, but the veteran still has his eyes set on the Stanley Cup.

“We’re still playing for the same prize,” Richardson said. “I think the fans are gonna hear some interesting things that they normally wouldn’t hear, so I’m looking forward to seeing that.”

Arizona Cardinals fans who plan to attend games this season will be asked to help stop the spread of the coronavirus.

Brian McCarthy, vice president of communications for the NFL, said in a Tweet Wednesday that “for those wondering, yes, it is league-wide: Fans at NFL games this season will be required to wear face coverings.”

No word yet on social distance rules.