As the use of personal protective equipment has increased during the COVID-19 pandemic, masks and other trash have washed ashore on the Soko Islands in Hong Kong. (Photo courtesy of OceansAsia.org) 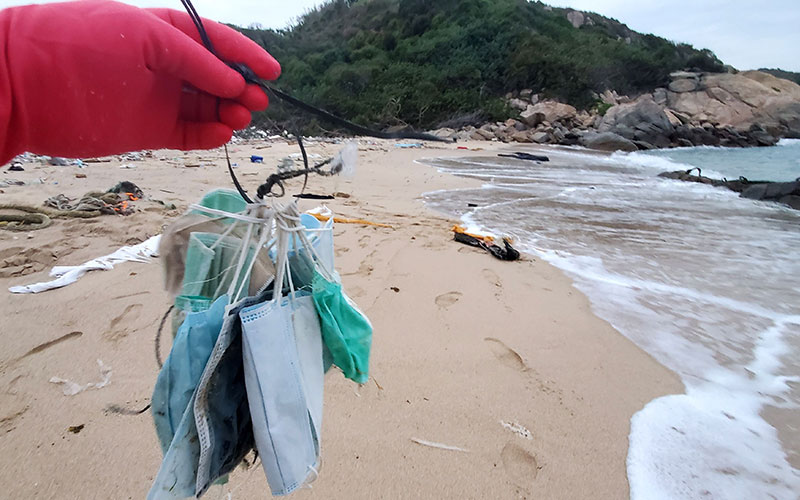 OceansAsia, a Hong Kong nonprofit dedicated to protecting the seas from pollution, collects PPE trash that washed ashore on the Soko Islands. (Photo courtesy of OceansAsia.org)

PHOENIX – Strewn across parking lots, in rivers and washing up on beaches, disposable face masks, gloves and other personal protection equipment are turning up everywhere except where they should be – in the landfill.

With the production and use of PPE surging during the COVID-19 pandemic, many experts are worried this new type of pollution, which is in the early stages of study, could have an array of lasting environmental impacts.

One researcher who is developing a way to track such waste said the effects may be seen for years to come.

“If it’s on your streets, it’s going to the ocean because it’s one rainfall away from getting into a storm water system, and then being carried into a river and into the ocean. Like any other plastic, this stuff is going to break down under ultraviolet light into smaller pieces,” said Mark Benfield, a zooplankton ecologist and professor in the department of oceanography and coastal sciences at Louisiana State University in Baton Rouge.

The recent influx of PPE waste is among the 8 million metric tons of plastic estimated to enter the oceans each year, according to the National Oceanic and Atmospheric Administration’s National Ocean Service.

Benfield said he “got a little stir crazy” quarantining and working from his home before he developed a methodological survey to track PPE pollution around the world.

At the end of March, Benfield took a walk through his neighborhood, and said he began to notice litter he had never seen before – rubber gloves, disinfecting wipes and face masks – along the sidewalk.

Using a fitness tracking app on his phone, Benfield was able to track his route and use Google Earth to map out each location where litter was found. 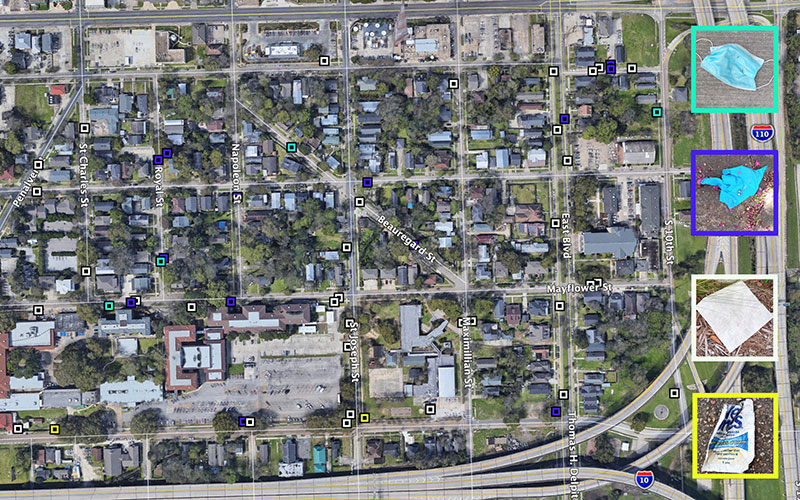 This is a visualization of PPE waste found on July 5 in the neighborhood of Baton Rouge, Louisiana, where professor of oceanography and coastal sciences Mark Benfield lives. (Photo courtesy of Mark Benfield)

Benfield then reached out to colleagues in Shenzhen, China, after reading about PPE pollution in Hong Kong. From there, Benfield has expanded the survey to around the globe by having individuals send in their findings, which include photos of the waste and locations.

“We’re not asking people to pick this stuff up; they don’t have to interact with it,” he said. “In fact, I think it’s better if they don’t, just from a sort of personal protection point of view, but also so we don’t bias the data by removing this stuff.”

With the closures of indoor pastimes, such as movies and gyms, some Arizonans have taken to spending more time outdoors. However, Benfield has yet to receive submissions of data from Arizona, and he encouraged residents to send their findings to [email protected].

He hopes the data will show trends, such as whether the number of hospitalizations in an area is related to the amount of PPE pollution, or if such predictions can be made.

“We’ve got I think enough data to write a paper, which is what I’m working on now, sort of characterizing this new class of plastic debris that’s going to get into the oceans,” Benfield said.

Nonprofits in France and Hong Kong began expressing concern over the amount of PPE found in oceans, such as disposable gloves, masks and hand sanitizer bottles divers have found in the Mediterranean and Hong Kong’s Soko Islands, the Guardian reported.

“We don’t have microorganisms in the environment that can mineralize this material,” said Alex Truelove, the director of the Zero Waste campaign for the U.S. Public Interest Research Group, “so they sit around on land or rivers or oceans or wherever they might end up, for as far as hundreds of years.”

Recently, Benfield has begun receiving data from coastal cities in California, including San Diego and San Francisco, although he hasn’t analyzed the data yet.

The last stop for preventing plastic from entering the ocean are beaches, and the California Coastal Commission typically hosts cleanup events, but concerns about the spread of COVID-19 have prevented a large-scale cleanup and analysis of PPE waste on the state’s oceans and beaches.

“Until we determine that gatherings are safe, which probably is not until there’s a vaccine, we’re not going to be holding any organized events” likely through the end of the year, said Eben Schwartz, marine debris program manager for the commission.

Instead, Schwartz said the commission has encouraged individuals or small groups, once it is safe to do so, to clean up in their areas and use its app, Clean Swell, to track debris.

“What we’re hoping for is that we’ll get a good enough response and enough people using our debris tracker app to really be able to take a look at what’s out in the environment right now, and what new issues might be emerging, given these awful circumstances we’re all in,” Schwartz said.

Another concern with the increase in PPE ocean waste is the effect of microplastics – grains of plastic that are less than 5 millimeters long – on wildlife and humans alike.

The breakdown of PPE plastics, Truelove said, is “probably not great for public health as we continue to find plastics in our own bodies and there’s a lot of research trying to understand the long term effects of ingesting microplastics.”

For workers in health care, disposable PPE is essential to ensure frontline workers are protected.

Matthew Wellington is the public health campaigns director for the U.S. Public Interest Research Group, which is a federation of state research groups that advocate in the public interest.

“Because of the system that we rely on, we are having to make difficult choices about public health and some of the environmental repercussions of the disposable PPE,” Wellington said.

The first priority is to protect people’s health during the pandemic, he said, adding that it’s time to start thinking of a better system to prevent unnecessary waste.

“I think now is the time for the federal government to put funding and research efforts into developing better systems and better ways to make sure that we are able to reuse PPE and some other medical supplies that are single-use right now,” Wellington said.

But for now, there is one simple way to prevent PPE pollution: Don’t litter.

“They should not be disposing of them in the environment,” Schwartz said. “I think that’s a pretty cut and dry issue. People need to take care of these items, and treat them as the resources they are.”