Plastic trash has many sources, including fishing nets. The plastics eventually break down into small pieces that fish and other marine life mistake for food. That micro-plastic contamination eventually could be ingested by humans. (Photo courtesy of National Oceanic and Atmospheric Administration)

Volunteers who hit the beaches on Coastal Cleanup Day in September collected 734,000 pounds of this kind of trash and recyclable materials, according to the California Coastal Commission.

“It’s good for the volunteers to come out to understand we only have one ocean, only one beach, and it’s up to us to keep it clean for the next generations,” volunteer Art Salter said.

In addition to keeping the beaches clean, these kinds of cleanup efforts are meant to help keep plastics and debris from joining the Great Pacific Garbage Patch, an enormous, swirling collection of plastic and marine debris in the Pacific Ocean between Hawaii and California.

It’s difficult to estimate the size of the patch – it’s constantly changing because of ocean currents and winds, according to the National Oceanic and Atmospheric Administration (NOAA). 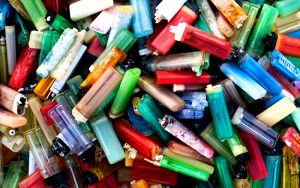 Beth Polidoro, an associate professor of marine toxicology at Arizona State University, estimates about 80 percent of the Great Pacific Garbage Patch is made up plastic pollution, from fishing nets to cigarette lighters. (Photo courtesy of National Oceanic and Atmospheric Administration)

Researchers have tried, though. A study published in the journal Scientific Reports in March suggested the patch contains 16 times more trash than previously reported. And the patch spans more than 600,000 square miles – that’s about three times the size of France.

The Ocean Cleanup, a Netherlands-based nonprofit, paid for the research through a crowd-funding campaign. The nonprofit is developing a system to try to catch some of that trash.

But the task in daunting.

“It’s massive. It really kind of scares me a little bit, to be honest with you,” said Beth Polidoro, associate professor of marine toxicology at Arizona State University.

Polidoro has a research grant from NOAA to study the risks associated with plastic litter and microplastics in marine ecosystems and seafood, according to ASU Now.

In the past 15 years, she said, there has been explosive growth in plastic use and plastic disposal, particularly of single-use plastics, such as grocery bags and utensils.

She said about 80 percent of the Great Pacific Garbage Patch is made up plastic pollution, items such as fishing nets, furniture and tiny pieces of plastic.

“So, our sea animals are actually eating microplastics or plastic debris, and that has the potential to transfer up the food chain, to us,” Polidoro said.

‘Love it, don't trash it': Freeway litter across metro Phoenix costs millions to clean up

Polidoro said there are simple ways to reduce plastic use and keep it out of the ocean, such as using stainless steel water bottles and using fabric shopping bags at the grocery store.

In Santa Monica, Salter helped lead the team cleaning up a site north of the Santa Monica Beach Pier as part of the statewide Coastal Cleanup Day, which this year attracted more than 53,000 volunteers to about 1,000 sites.

Salter volunteers for Heal the Bay, a Santa Monica-based environmental advocacy nonprofit, that each year helps Los Angeles County clean up beaches. He said he was inspired to get involved after noticing trash during a trip to the beach with his family 10 years ago.

Polidoro said such cleanup efforts are a crucial stepping stone.

“There’s no one organization or one type of institution that’s going to solve this problem,” she said. “It’s really up to us, as a society, to decide we want to have a clean, healthy environment because we care about our public health.”