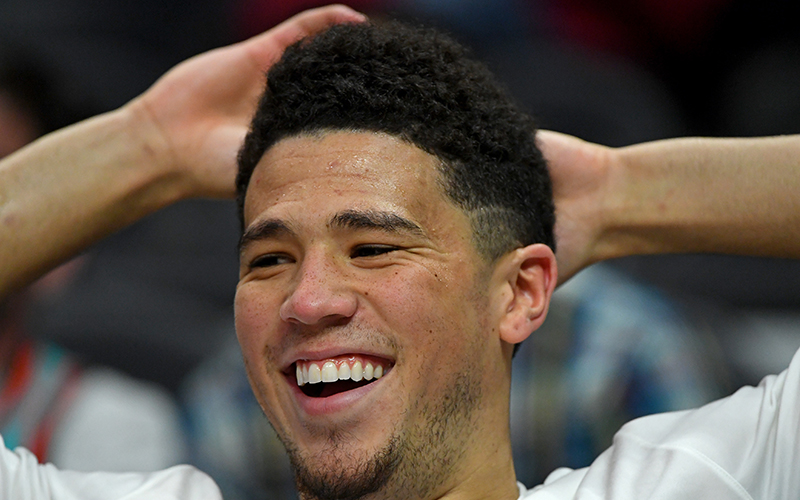 Phoenix Suns guard Devin Booker is happy to be back on the court but also curious how life will be like in Florida’s NBA “bubble.” The team’s first game is July 31. (Photo by Jayne Kamin-Oncea/Getty Images)

PHOENIX – With the Suns inside the NBA’s Orlando “bubble” for almost a week now, Devin Booker is adjusting to a new lifestyle pace.

While some players have shared images on social media of fishing or participating in other activities, Booker told reporters on a Zoom call Monday that his days “just consist of practice and getting to know yourself.”

Booker added that he spends most of his free time playing Call of Duty in his room, averaging five to 10 hours.

The worst part of the NBA’s isolated bubble for both Booker and coach Monty Williams is those they left back home.

Williams said that the loss of time with his children hurts him the most right now, but FaceTime helps.

Booker misses his dog. He said FaceTime with his dog isn’t giving him the reactions he was hoping for, but knows that he’ll see him soon.

Both men seemed comfortable, however. The team recently hosted a movie night and players will be spending more time together before games tip off.

Inside the @NBA bubble at @WaltDisneyWorld pic.twitter.com/1oRyVlXhRc

Booker made sure to note that he has all he needs inside the bubble.

Spring training ended abruptly for the Diamondbacks in March, canceling the back half of planned preparation for the upcoming season and putting the team’s players in limbo.

But some starting pitchers stayed in Arizona and continued to work out at the team’s facility at Salt River Fields, something pitching coach Matt Herges said paid dividends as they now prepare for a rapidly approaching shortened season.

“Robbie was in there,” Herges said. “I mean this guy was a maniac with this in the quarantine time.”

Herges also praised manager Torey Lovullo for communicating a sense of urgency before the restart.

“Torey was great about communicating, ‘Listen, when this happens, it could happen abruptly, right?'” Herges said. “Like we could be told ‘Hey, it’s go time, you need to get here, and we need to go.’

“And when they step foot on camp, they put their two feet at Chase Field or wherever we’re going to have this spring training 2.0, be ready to throw two innings. And I mean shoot, Robbie was ready to throw four innings the first day he got in here.”

The club’s intrasquad game at 6 p.m. Monday will be live streamed on dbacks.com.

After experiencing symptoms of COVID-19 early last week, Arizona Cardinals owner Michael Bidwill checked himself into a Rhode Island hospital. On Sunday, he was released.

“This week I learned firsthand just how serious COVID-19 is,” Bidwill said in a statement released by the team. “My immense appreciation for all those on the front lines of this pandemic has only increased.”

Bidwill, 55, said he had been traveling for business on the East Coast for several weeks. Additionally, he has been working away from the team’s Tempe facility since March because of COVID-19 concerns and has not interacted with staff.

His initial symptoms included a fever and headache.

He was “overwhelmed by the outpouring of kindness from the Red Sea as well as so many friends and colleagues in Arizona and throughout the country,” he said. “I’m very fortunate to have this experience behind me and strongly encourage everyone to continue practicing the important measures to avoid it themselves.”

The Cardinals are scheduled to open training camp on July 28. 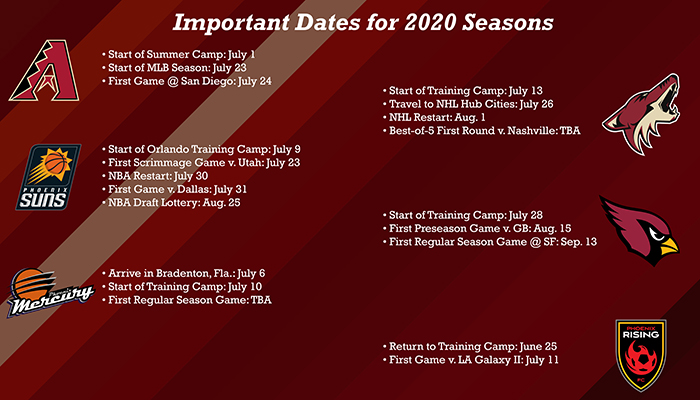 One of the few sports that has offered live competition recently is horse racing, from Keeneland Race Course in Lexington, Kentucky, to Royal Ascot in London.

Locally, Turf Paradise is scheduled to start up again in October. But those horse racing fans who took advantage of Off Track Betting sites in Arizona received bad news last week when an executive order put in place by Gov. Doug Ducey closed bars and other businesses to slow a spike in coronavirus cases.

Speaking of Keeneland, a horse named for Dr. Anthony Fauci won his first race there recently.

The horse is named for the director of the National Institute of Allergy and Infectious Diseases who is advising the White House on the coronavirus pandemic.

Fauci was purchased for $175,000 at the 2019 Keeneland September Yearling Sale, the track reported.