PHOENIX – Following the lead of the Big Ten and others, the Pac-12 Conference announced its football teams will play only conference games in 2020.

The news came after executive members of the Pac-12 met Friday to discuss their options. The sports affected also include men’s and women’s soccer and women’s volleyball. The conference also said it is delaying the start of mandatory athletic activities until health and safety indicators, “which have recently trended in a negative direction, provided sufficient positive data to enable a move to a second phase of return-to-play activities.”

“The health and safety of our student-athletes and all those connected to Pac-12 sports continues to be our number one priority,” Pac-12 Commissioner Larry Scott said.

The Pac-12 is not alone in its thought to rethink the season. ACC commissioner John Swofford announced the conference would make a decision at the end of July, while Sports Illustrated reports that the SEC is gathering all 14 of its athletic directors on Monday for an in-person meeting to discuss the season.

The news is a result of the coronavirus pandemic as cases increase in many states.

Sixty-nine FBS schools nationwide have released or reported data on coronavirus testing of its athletes, the Buffalo News reported. Arizona State is not one of them. An athletic department spokesman said the reason is a university-wide policy to not disclose information.

“As you know, we work in close coordination with ADHS and the Maricopa County Department of Public Health and will continue deferring to those public health agencies regarding disclosure of positive test results and related information,” the university said in a statement “Public health officials will advise ASU if additional disclosure measures are necessary. University leaders, in consultation with public health officials, will determine the right protocols for intramural sports and fitness programs.” 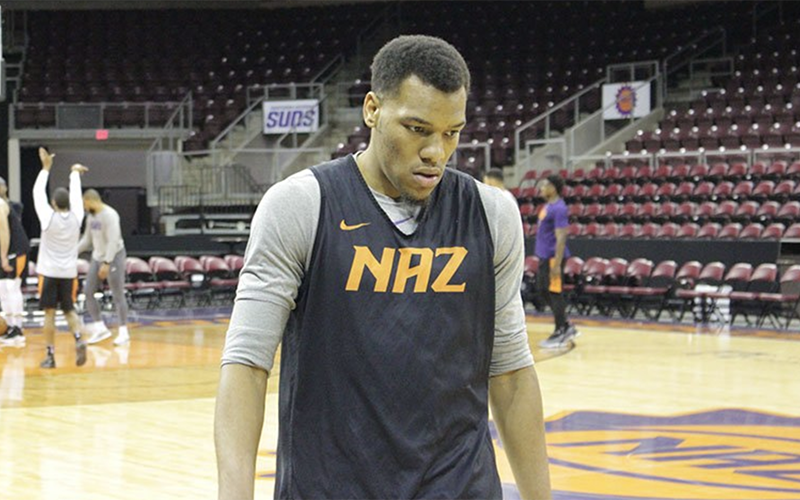 On June 29th, Arizona decided to halt its athletes’ return to campus. At that time, there had been just one positive test among the 83 athletes that returned for voluntary workouts, the school said in a statement.

Other notable Pac-12 non-conference games that have already been canceled due to the Big Ten’s announcement are Michigan visiting Washington in Week 1 and Ohio State visiting Oregon in Week 2. If the Pac-12 follows suit, the yearly matchup between USC and Notre Dame would also not be played.

Across the country, there has been a wave of universities deciding to cut numerous sports programs in order to save money due to the coronavirus pandemic. That wave hit Stanford on Wednesday as it decided to drop 11 programs including wrestling and men’s volleyball. The move will save the school $70 million, reports The New York Times.

On Thursday, Anderson said he would do his best to ensure that wave would not reach ASU.

“We recognize many of our Pac-12 colleagues and other institutions across the country have made difficult decisions to cut sports and support staff in recent weeks,” he said. “We remain steadfast in our intent and commitment to avoid such drastic measures through every means possible. We are entering a critical period of time which will inform us of many pieces to the larger puzzle of our fall seasons. Until we have more clarity on those timelines and the parameters in which we’ll need to adhere to, we will continue to prepare for all scenarios to ensure the safest environment possible for the entire ASU community.”

Arizona Cardinals owner Michael Bidwill has been hospitalized for the coronavirus, the team announced Friday,

It is believed Bidwill, 55, contracted the virus after traveling on the East Coast.

“His symptoms have subsided and Bidwill is expected to be released sometime this weekend,” the team said in a statement.

The list of players opting out of the 2020 MLB season added another name as San Francisco Giants catcher Buster Posey has decided to not play.

The decision comes after Posey and his wife adopted prematurely-born identical twins on Thursday. 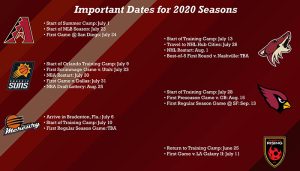 After some back and forth and numerous holdups, Major League Baseball has released the numbers it has received highlighting the first round of coronavirus testing it has done across players and employees.

Of the 66 positive cases, 58 were from players, and the remaining eight were staff members.

The Arizona Sports and Tourism Authority said it expects to see significantly reduced seating capacity when the NFL season begins in September.

The organization projects 17.5% attendance at football games in the fiscal year that began July 1, the Arizona Republic reported. The overall budget was reduced about 36.6% year over year.

“The authority and its stadium partners feel confident that some level of event activity will return to the stadium, slowly being phased in as new guidelines are put into place,” the organization said in its budget.

Planned upgrades to the stadium facilities are on hold for six months.