Supporters of mandatory birth-control coverage under Obamacare protest outside the Supreme Court in 2016 – the last time a case involving a challenge from Little Sisters of the Poor reached the court. The justices this week upheld an exemption to the mandate on religious and moral grounds. (Photo by Cronkite News)

PHOENIX – Arizona health care advocates said they are bracing for a flood of people seeking contraceptive care after the Supreme Court ruled Wednesday that employers can deny the coverage on religious or moral grounds.

The 7-2 ruling upholds a sweeping exception to the Affordable Care Act, which originally required employers to include contraceptive coverage in their workers’ health insurance. The ruling is expected to result in lost coverage for as many as “126,400 women of childbearing age.”

The White House called the ruling a “big win for religious freedom,” but Justice Ruth Bader Ginsburg in her dissent said the resulting loss of coverage would pose “significant burdens on women employees.”

The exact impact in Arizona is unclear, but advocates said they are certain there will be an extensive number of employers who will opt out of covering birth control under their health care plans.

“So many more women will have no access to contraception and family planning services, which is critical,” said Jodi Liggett, founder of the Arizona Center for Women’s Advancement. “And it has been blow after blow in Arizona and unfortunately I think we’re going to see that.”

But Rep. Debbie Lesko, R-Peoria, who signed on to a brief supporting the exemption, framed the decision in terms of religious freedom. “No one should be compelled by the government to violate their religious beliefs and this decision affirmed that protection,” she said in a statement.

The ruling in Little Sister of the Poor v. Pennsylvania was the latest in a string of legal challenges to the inclusion of contraceptive services in the mandated care section of the Affordable Care Act – better known as Obamacare.

Federal regulators have been crafting religious exemptions to the contraceptive requirement as far back as 2012, just two years after Obamacare took effect. But business and religious groups have challenged those exceptions as too narrow.

The case decided Wednesday was brought by the states of Pennsylvania and New Jersey, which said the latest exemption, crafted during the Trump administration, went too far. That rule said any business with a “sincerely held religious belief” or “sincerely held moral objections” to contraception did not have to provide the care for its workers.

The states argued that federal regulators exceeded their authority when they crafted the new exemption, but the Supreme Court disagreed.

But in a sharp dissent, Justice Ruth Bader Ginsburg said the effect of the ruling would mean “between 70,500 and 126,400 women would immediately lose access to no-cost contraceptive services.” 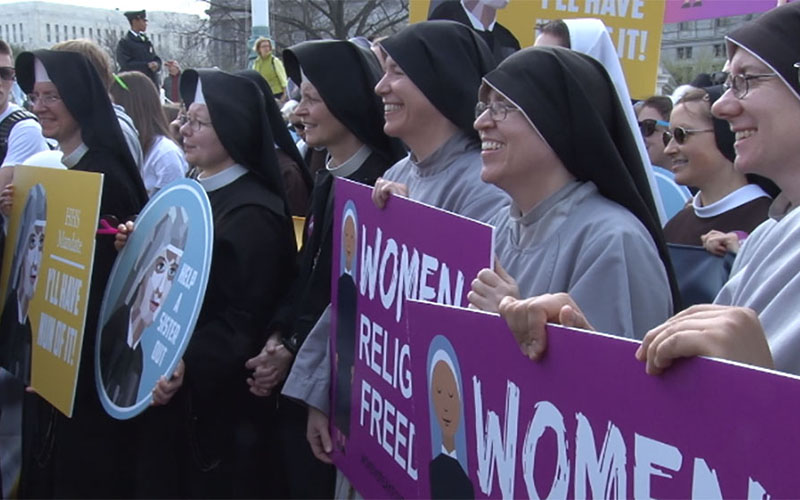 Little Sisters of the Poor protest outside the Supreme Court in this 2016 photo. The Obamacare requirement that health plans include contraceptive care has been challenged by religious group almost since the law’s enactment 10 years ago. (Photo by Cronkite News)

“The Court leaves women workers to fend for themselves, to seek contraceptive coverage from sources other than their employer’s insurer, and, absent another available source of funding, to pay for contraceptive services out of their own pockets,” wrote Ginsburg, who was joined in her dissent by Justice Sonia Sotomayor.

Thomas said she believes the 126,000 estimate is far too low. “I can’t imagine that number. There will be more people who will opt out of covering birth control,” she said.

In its statement hailing the ruling, however, the White House said women would still be able to access contraceptive coverage through the federal Title X program, which funds family planning services.

“We are allowing women who lack access to contraceptive coverage because of their employer’s religious beliefs or moral convictions to more easily access such care through the Title X program at little to no cost,” the administration statement said.

But the administration last year instituted a rule to deny Title X funding to any clinic that performs, supports or refers women for abortions. The administration also proposed funding the Title X program at $286.5 million in fiscal 2021 – the same amount it proposed last year, but well below the $400 million that was eventually approved in this year’s budget.

Thomas said Title X programs like Arizona Family Health Partnership are already operating at capacity and they expect a surge of need as a result of the court’s ruling. But, given the threatened cuts to the Title X budget, there may not be enough money to help women who turn to her program.

“Yes, we provide exemplary care, but we don’t have enough money to take care of the population to begin with,” Thomas said.

Liggett added that the ruling will not only let employers control their workers’ family planning decisions, it will also keep women from getting treatment they need. Contraceptives are often prescribed to treat serious health issues, such as endometriosis and ovarian cysts.

“It’s astonishing that an employer gets the vote in these really, really private decisions,” she said.

Magdalena Verdugo, the CEO of the Southern Arizona chapter of the YWCA, said certain groups that already have a harder time getting reproductive care because of bias in the health care system, will be even worse off now.

“Women, because of systemic racism and oppression, have fewer choices,” Verdugo said. They cannot easily change employers or demand support from their workplaces, and cannot take jobs that require higher education degrees.

Despite the ruling, Liggett said advocates will continue to fight on the state level and will have to start looking at “a multiyear effort to crawl out of the hole we’re in.”