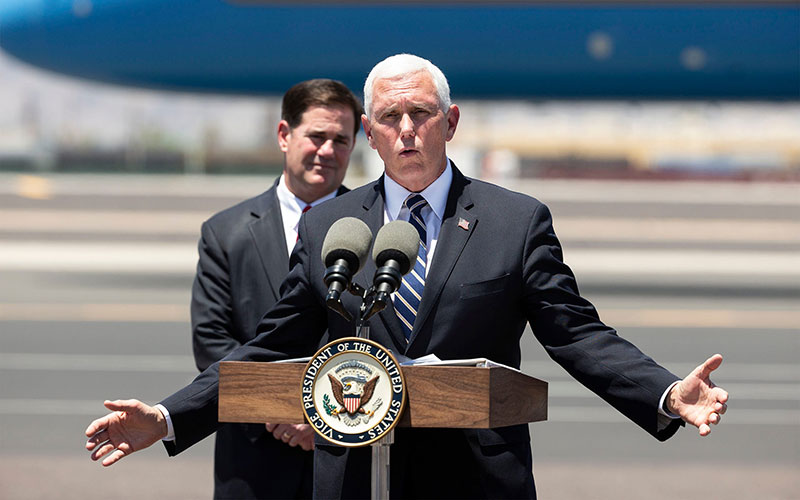 Vice President Mike Pence, with Gov. Doug Ducey, speaks at a news conference Wednesday at Phoenix Sky Harbor International Airport. He said the federal government “will do whatever it takes to meet this moment.” (Photo courtesy of Rob Schumacher/The Arizona Republic)

PHOENIX – As Arizona broke records Wednesday for new COVID-19 cases and deaths reported in a single day, Vice President Mike Pence flew in to assure Gov. Doug Ducey that the federal government “will spare no expense” in helping the state.

Pence’s trip originally included a visit to Tucson and a rally with supporters, but those events were canceled as the vice president continues to tour states hard hit by COVID-19, including Texas last weekend and a trip to Florida on Thursday.

“We say to the people of Arizona, we are with you and we are going to make sure that Arizona has whatever it takes to meet this moment, to slow the spread and flatten the curve to save lives,” Pence told reporters, standing on the tarmac at Phoenix Sky Harbor International Airport.

On Wednesday, July 1, the Arizona Department of Health Services reported a record 4,878 new cases of COVID-19 and 88 deaths in the state, bringing total deaths to 1,720. It said 20,151 tests for COVID-19 have been completed in public and private labs in Arizona, and 24.2% of tests have come back positive for the virus that causes the disease.

Pence, in response to calls for more health care workers to relieve those now on the front lines, said he has instructed Acting Secretary of Homeland Security Chad Wolf to send 500 medical personnel to the state, in addition to 62 workers sent to Tucson earlier this week.

“Help is on the way,” Pence said. “We are going to spare no expense to provide the kind of reinforcements that you will need to all across this state should this coronavirus continue to expand in Arizona.”

State health officials report that 89% of the state’s intensive care unit beds were full as of Tuesday, leaving 187 ICU beds for future patients. Additionally, 85% of inpatient beds are in use, leaving 1,140 beds unused statewide.

Pence and Ducey, both of whom wore masks before speaking, announced they are prepared to open two additional “surge facilities” if hospital capacity becomes unmanageable.

“We are going to make sure that Arizona continues to have the health care capacity in this state to render to everyone who contracts the coronavirus,” Pence said.

Noting that nearly half of all new infections in Arizona are occurring in patients younger than 35, Birx addressed millennials and Gen Z directly, first thanking them for telling older generations about using masks.

She also issued a warning: “Be aware there are people in your age group that have preexisting conditions that you may not know about,” who remain vulnerable to hospitalization and dire outcomes.

“These individuals, no matter their age, are susceptible,” she added.

Ducey had a clear message for Arizonans: “You are safer at home.”

Arizona’s 45-day stay-at-home order expired May 15. Ducey on Monday issued an executive order closing down bars, water parks, movie theaters and gatherings of 50 or more to slow the spread of illness.

Ducey urged Arizonans to do their part, saying, “We now need to spread the message far and wide that we all can contribute to slowing the spread of this virus by following the fundamentals of masking up, washing your hands, maintaining that physical distance between others and when you are sick staying home.”

Pence also voiced interest in reopening the economy and said it was of “paramount importance” to return students to classrooms this fall. 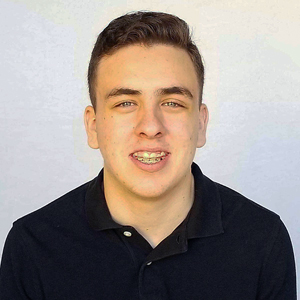 Caleb Bouchy is an Arizona native who covers sports for Cronkite News.