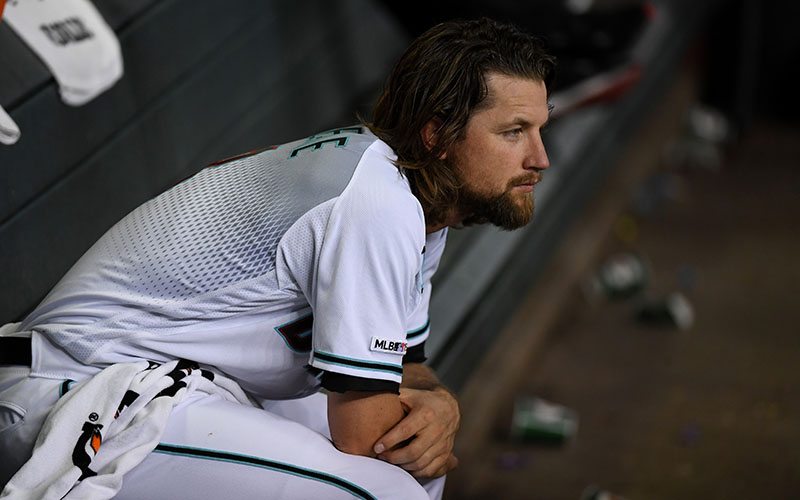 Arizona Diamondbacks pitcher Mike Leake has opted to sit out the Major League Baseball season. His agent said, “During this global pandemic, Mike and his family had many discussions about playing this season.” (Photo by Norm Hall/Getty Images)

PHOENIX – The Arizona Diamondbacks announced their 60-man roster for their upcoming summer training camp Monday, but the biggest news was which player on that list would not be joining the team.

Mike Leake, a key rotation piece and pending free agent, notified the club that he will exercise his ability to opt out of playing the 2020 season, Diamondbacks general manager Mike Hazen said.

Players who are “high risk” for COVID-19 are entitled to full service time and salary if they opt out, according to the 2020 Operations Manual developed by MLB and the MLB Players Association. Players with no high-risk concerns may opt out, but without accruing service time or salary. It’s unclear which category Leake would fall into, and Hazen declined to specify when asked.

Hazen said he received a phone call from Leake recently that informed him of the news. Hazen declined to discuss the reasons for Leake’s decision, calling the conversation “personal in nature.”

Leake’s agent, Danny Horwits, said in a statement that Leake and his family had “many discussions about playing this season. They took countless factors into consideration, many of which are personal to him and his family.”

“We had to put him on our 60-man due to transactions that will take place in the future,” Hazen said. “So, there’s just a timing element transactionally.”

The news leaves the club with a hole in their projected starting rotation, though the shortened 60-game season mitigates the loss somewhat. Hazen noted that Leake’s absence forces him and the rest of the Diamondbacks’ brain trust to be creative with their rotation plans for 2020, especially with the institution of the designated hitter in the National League for the first time.

“I think having the DH changes the equation in the sense that it opens up possibilities for us,” Hazen said. “We’ve talked about this at length, running an opener or doing that is really challenging when the pitcher is hitting because (manager Torey Lovullo) is forced into decisions in the National League. … It certainly opens up avenues for us to reimagine how we look at our pitching staff,” Hazen said.

Hazen added he felt the club had “seven legitimate Major League starters” entering the season, a total that is now down to six.

Left off the roster entirely was Yasmany Tomas, the latest fall from grace for the outfielder who signed for six years and $68.5 million as an international free agent out of Cuba in prior to the 2015 season.

Camp is scheduled to begin Friday, July 3 at Chase Field.