High fives and crowded dugouts won’t be part of the scene for the Arizona Diamondbacks at Chase Field when the Major League Baseball season gets underway in July. (Photo by Norm Hall/Getty Images)

PHOENIX – When Major League Baseball canceled the remainder of spring training games on March 12 in response to the coronavirus pandemic, it was with the initial hope of holding Opening Day for the 2020 season on April 9.

That hope never manifested as the spread of the coronavirus forced the league and its players into a labor dispute that lasted just shy of three months. After much back and forth between MLB and the MLBPA, the two sides managed to strike a deal on Monday.

Finally, it was decided, there will be baseball in 2020.

“I can’t wait to compete and have our players compete,” Diamondbacks Executive Vice President and General Manager Mike Hazen said Wednesday. “The hardest part of this has been the team we put together in the offseason getting paused and not getting to see those guys go out there as a team. They tell us to play, we’re going to go out there and compete. We have a good team and I’m glad we’re going to be able to bring baseball to a lot of people.”

Teams are to report to a “Spring Training 2.0” at their home facilities on July 1 to begin preparing for a 60-game season that will begin on July 23.

The Diamondbacks’ schedule will feature 10 games against each club in the National League West. The remaining games will be played against clubs playing in their opposite league’s corresponding geographical division in order to mitigate travel. For the Diamondbacks, that means playing against teams in the American League West, setting up entertaining matchups with the rival Los Angeles Dodgers and the 2019 American League champion Houston Astros.

In an effort to finish games more quickly, every half-inning after the ninth will begin with a runner on second base, USA Today reported. The designated runner would be the player who made the final out in the previous half-inning.

On top of that, the designated hitter will be utilized in the National League for the first time in 2020. Thus far, neither of these rule changes has been extended past this upcoming season. 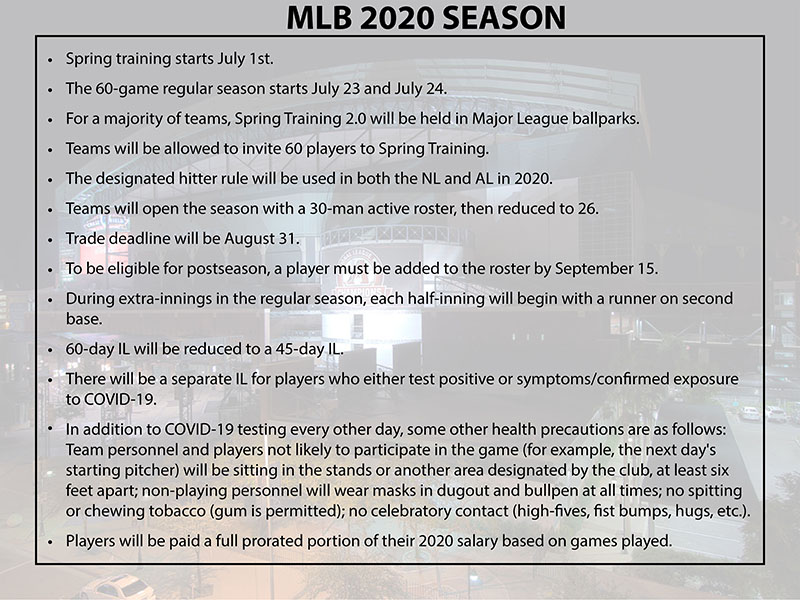 A huge divider between the owners and players was the monetary aspect of a shortened season. The new deal includes a full prorated salary for the players, meaning they will receive just 37% of their full-season salary as long as the suggested schedule is played in full.

The two sides also had to agree to health and safety protocols for the season. Spitting, smokeless tobacco and sunflower seeds will not be allowed. Gum will be permitted.

A ban on physical contact between players, coaches, managers and athletic trainers will also be in place. This includes high fives, fist bumps and the “baseball hug.”

In order to limit the spread of the coronavirus, anyone recording a temperature above 100.4 degrees will not be permitted to enter any ballpark and will need to self-isolate.

“We all understand that we are in a unique time and place that none of us have ever experienced before,” Hazen said. “I believe that these protocols are exceedingly restrictive in a lot of positive ways to minimize the spread of the virus and to identify those early that may be positive for the virus.”

The typical 10-day injured list will remain in place for the season, but a new COVID-19-related injured list for players who test positive, have confirmed exposure or are exhibiting symptoms will be added. Those players would not have a specific number of days to spend on that list. Testing on players will take place multiple times per week and any positive return would warrant quarantining and players would not be able to return to action until they pass tests twice.

Postseason play would begin September 29, leading to a World Series start date of October 20, something Dr. Anthony Fauci, the director of the National Institute of Allergy and Infectious Diseases, advised against.

“If the question is time, I would try to keep it in the core summer months and end it not with the way we play the World Series, until the end of October when it’s cold,” Fauci said in an interview with the Los Angeles Times. “Even in warm weather, like in Arizona and California, we’re starting to see resurgences as we open up. But I think the chances of there being less of an issue in the end of July and all of August and September, are much, much better than if you go into October.”

Needless to say, many questions are left to be answered headed into a season that is sure to be full of the unknown. But we do know one thing: Baseball is back.