Arizonans traveling to New York, New Jersey and Connecticut are subject to a 14-day quarantine as those states try to stem the spread of COVID-19 from “hot spots” states. In this file photo from March, international travelers wait to pass through customs at Dulles International Airport in Northern Virginia. (Photo by Glenn Fawcett/U.S. Customs and Border Protection)

TEMPE – Arizonans will face a 14-day quarantine if they travel to New York, New Jersey or Connecticut, whose governors announced the restriction Wednesday to keep people from COVID-19 “hot spots” from bringing the infection with them.

The quarantine, which took effect at midnight Wednesday, applied to nine states with positive virus test rates above 10% or 10 cases per 100,000 residents over a seven-day period. Arizona has been well beyond that threshold for the past three weeks, as the state has regularly set new records for daily infections.

Cuomo said the three Northeast states, which were hit hard by COVID-19 early in the pandemic, “worked very hard to get the viral transmission rate down” and they want to keep it that way.

“We don’t want to see it go up because a lot of people come into this region and they could literally bring the infection with them,” Cuomo said. “It wouldn’t be malicious or malevolent, but it would still be real.”

Murphy said imposing the quarantine is just “a smart thing to do” to protect their states.

“We have taken our people, the three of us, these three states, through hell and back. The last thing we need to do right now is subject our folks to another round,” he said.

It’s a reversal from April, when infection rates in the Northeast were running high and Arizona imposed travel restrictions on travelers from those states. Aldo Vazquez, spokesperson for AAA Arizona, said “obviously, it’s the 180 now.”

“Back in April, New York, the Northeast was a hot spot and Arizona applied a restriction from travelers in that area,” Vazquez said. “And now we’ve become the hot spot. And we’re seeing the reverse relationship going on here.”

The announcement comes as Arizona has seen cases of COVID-19 skyrocket in recent weeks. There have been 19,048 new cases in the past week, almost a third of the 59,974 cases since the first COVID-19 positive test in the state in late January.

Arizona Gov. Doug Ducey has faced criticism for his decision to relax a stay-home order in May and his refusal to impose a statewide requirement that people wear masks in public. Against the backdrop of soaring cases, however, Ducey last week announced that local governments would be allowed to impose their own mask mandates.

Ducey’s office did not respond to a request for comment Wednesday on the quarantine order. But Cuomo cited Arizona as one of the states where he said opening the economy put “people’s lives in jeopardy.” 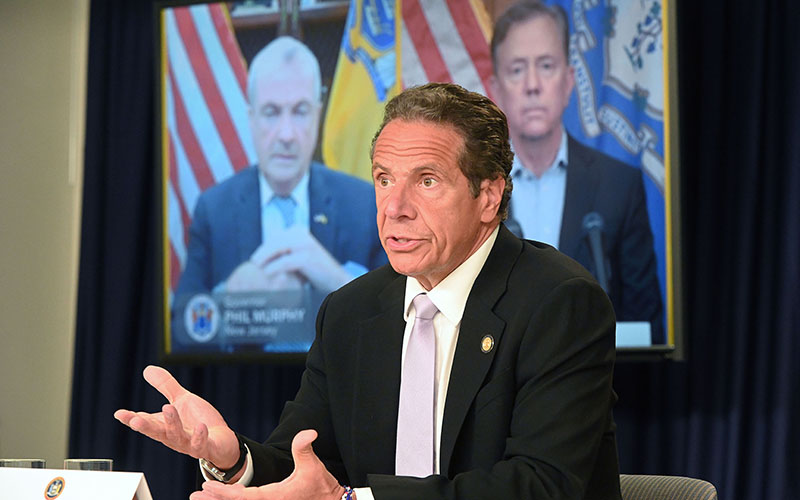 “And you look at Arizona, you look at Texas, you look at all these states, you know what you see? You see an arrow going up, because it was misguided to say we’re going to reopen the economy,” Cuomo said. “What you’re doing is you’re putting people’s lives in jeopardy, and you’re hurting the economy.”

Vijal Ludlow, co-owner of Awaken Travels, said travelers who are caught in the middle will have to weigh their options.

“I would like to tell travelers if they’re going for leisure purposes to probably wait a little bit longer until we flatten the curve a bit,” Ludlow said. “If it’s an emergency, then we just have to comply with what the state’s requirements are.”

Vazquez said AAA is encouraging people to “check the local and state restrictions, guidelines, anything that may have a destination that you are going to, to make sure that you understand what you’re heading into.”

Those include general health and safety recommendations from the Centers for Disease Control and Prevention and the State Department – and may include just canceling your trip, he said.

“The best thing that we can do is follow the guidelines … and right now those guidelines are just, hold off on any non-essential travel, continue practicing social distancing with face masks, and staying home as much as you possibly can,” Vazquez said.