Protesters find vantage spots as crowds grow during protests Sunday in downtown Phoenix. The protests – over the recent police killings of George Floyd in Minneapolis and Dion Johnson in Phoenix – were largely peaceful and came as the state imposed a dusk-to-dawn curfew. (Photo by Blake Benard/Special for Cronkite News) 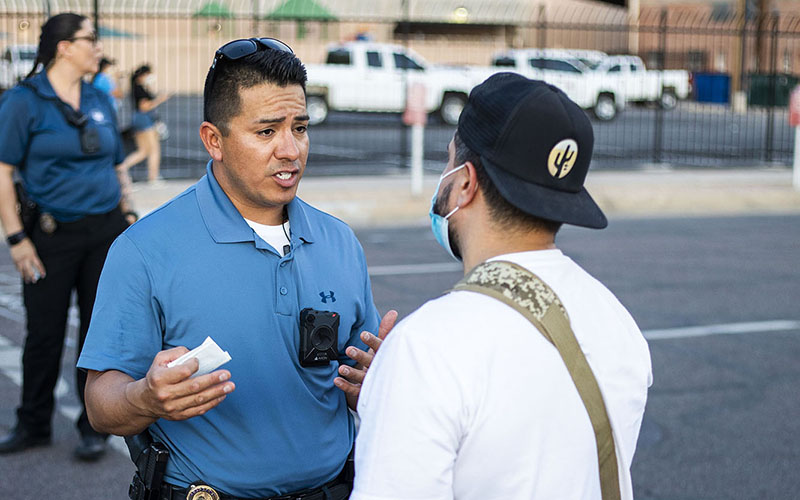 A police officer talks with a protester in downtown Phoenix Sunday afternoon, before a statewide curfew took effect. The nightly curfew runs from 8 p.m. to 5 a.m. (Photo by Blake Benard/Special for Cronkite News) 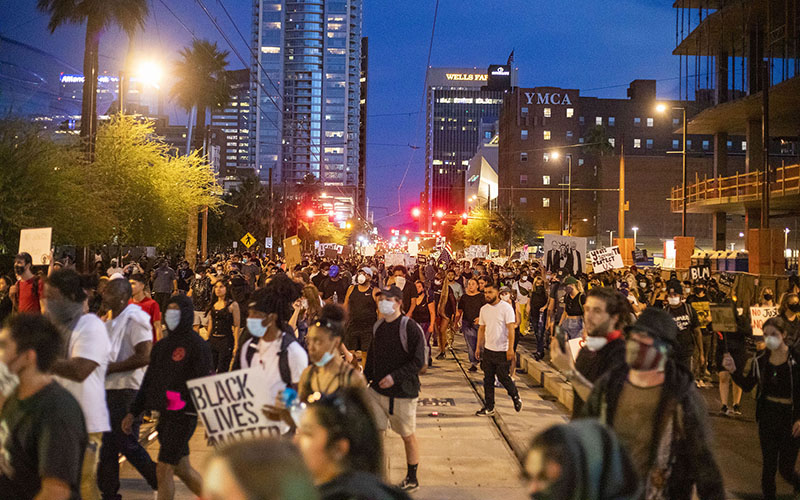 Protesters gather at Cityscape Park on First Avenue at 8 p.m. Sunday, as a statewide curfew took effect. Most eventually dispersed without incident, but some later were tear-gassed by police, who reported a number of arrests. (Photo by Blake Benard/Special for Cronkite News)

After days of clashes between protesters and police, Arizona spent a relatively quiet night Sunday under a statewide dusk-to-dawn curfew that was ordered Sunday afternoon by Gov. Doug Ducey.

Response from law enforcement agencies around the state ranged from departments that said they do not expect to enforce the curfew to others that said they would if needed, while citing exemptions that will allow people to be out after curfew.

More were like officials in Mohave County, who recognized the curfew but in a statement said they do not expect to have to enforce it over the next week.

“As the governor stated in his press release, this is a tool for law enforcement to address potential lawlessness,” Mohave County Sheriff Doug Schuster said.

“Having said this, this order will not interfere with the otherwise legal movement of our citizens, regardless of time of day, and the Mohave County Sheriff’s Office will continue to actively address criminal behavior brought to our attention,” the statement said.

Ducey’s order prohibits people from “being present on any public street or in any public place” from 8 p.m. until 5 a.m. Exemptions, however, include first responders and people traveling to and from work, running a business, seeking medical care or obtaining food.

Violators could be found guilty of a misdemeanor and face up to six months in jail and a $2,500 fine.

Ducey said Sunday that the curfew was made in response to local leaders and “gives law enforcement an additional tool to prevent the lawlessness we’ve seen here and in cities nationwide.”

“Police will be equipped to make arrests of individuals who are planning to riot, loot or cause damage and unrest,” he said.

The order also authorized a call-up of National Guard troops. A spokesman for the Arizona National Guard said Monday that 100 guardsmen have been called up so far.

The order came after days of clashes between police and people protesting the May 25 death in Minneapolis of George Floyd, who died after police officers kneeled on his back for more than eight minutes. That included one officer who pressed his knee into Floyd’s neck for nearly 9 minutes, despite Floyd’s repeated, anguished cries of “I can’t breathe.” 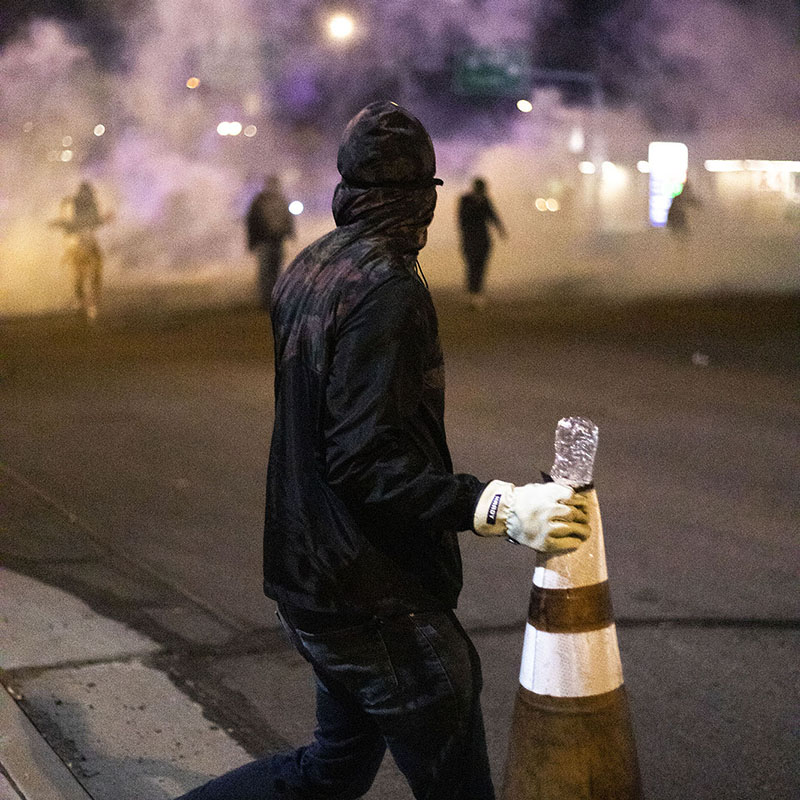 A protester with makeshift tear-gas protection surveys the scene in downtown Phoenix Sunday night, when a statewide curfew took effect after days of clashes between police and protesters. (Photo by Blake Benard/Cronkite News)

Arizona protesters were also angry over the May 25 shooting of Dion Johnson, a 28-year-old black man who was killed by a state trooper during a traffic stop on Loop 101 in Phoenix. Activists said Johnson was asleep in the car and unarmed.

The Department of Public Safety said it does not have video of the encounter with Johnson because the trooper was not equipped with a body camera. In Floyd’s case, his death was captured by bystanders’ cellphones and nearby security cameras.

Protests in Phoenix and Tucson began Thursday and continued through the weekend. They appeared to be largely peaceful, but clashes began to break out as police deployed tear gas and fired rubber bullets into the crowd, according to news reports.

Protests later spread to Prescott, Flagstaff and Scottsdale, where police said looters caused millions of dollars of damage at the city’s Fashion Square on Saturday. Scottsdale police arrested a dozen people Saturday and accused them of burglary, trespassing, disorderly conduct and other violations.

The situation was under more control Sunday night after the statewide curfew order.

“We did not have any arrests last night for curfew. Things were quiet as opposed to Saturday night,” said Sgt. Ben Hoster of the Scottsdale Police Department.

But that does not mean there were no incidents Sunday.

Crowds of protesters gathered in downtown Phoenix for the fourth night of protests but began to disperse when the curfew began, according to the Arizona Republic. News reports said police blocked off entrances to the Garfield neighborhood, and about a dozen of protesters remaining between Ninth and Garfield streets were detained by police about 9:30 p.m.

Police response has been criticized by some, including Rep. Raul Grijalva, D-Tucson, who noted that police stood by as armed protesters demonstrated against continued COVID-19 shutdowns at state capitols around the country.

“The protests we’re seeing today are borne out of decades of policing practices that have institutionalized excessive force as the norm when confronting black and brown bodies,” Grijalva said in a statement. He added that it is time to stop “the militarization of local police forces and bring accountability to those law enforcement officers who engage in unprovoked violence.”

Most law enforcement agencies in the state Monday tried to assure residents that they have nothing to fear from the curfew if they are behaving lawfully.

Apache County Sheriff Joseph Dedman said in a statement Monday that they are taking a “common sense” approach to Ducey’s curfew, which they said it targeted at “those who loot and facilitate lawlessness only.”

“The Apache County Sheriff’s Office … has no intention of imposing a curfew on the law-abiding citizens of Apache County,” said a statement from the department. “If you are out during the hours of 8 p.m. and 5 a.m. within Apache County, and you conduct yourself in a lawful manner, you have no reasons to worry about your movement and travel.”