Navajo Nation President Jonathan Nez joined other tribal leaders who said Friday that tribes are not getting the coronavirus relief they need. (Photo by Bryan Pietsch/Cronkite News)

PHOENIX – The Navajo Nation has the country’s third-highest rate of COVID-19 infections, but it has had to watch as funds go to less hard-hit areas in a “very slow” federal aid process, Navajo President Jonathan Nez said Friday.

Nez was one of several tribal leaders from around the country participating in a virtual House Natural Resources Committee session on the federal response to coronavirus in Indian Country – and their consensus was that the response has not been good.

“Tribal nations are the first citizens of this country, but sometimes we feel that we are pushed aside and that we are bidding against each other,” Nez said on the videoconference that included state and tribal leaders from Minnesota, New Mexico, the Great Plains and Alaska.

“All these tribal leaders on the panel, we are all bidding against each other for these finite resources of gloves, of masks, of gowns, face shields,” Nez said. “We are even bidding against governors … and it seems like the person with the most money gets the resources.”

Officials on the videoconference said they appreciate the $8 billion in aid set aside for tribes in the $2 trillion federal Coronavirus Aid, Relief and Economic Security, or CARES, Act, but that it is taking too long for the funds to reach Indian Country.

Rep. Raul Grijalva, D-Tucson, and chairman of the Natural Resources Committee, convened the session to “profile and bring to attention, what is going on and what is not going on in Indian Country.”

“This virus doesn’t see Democrat or Republican … and it shouldn’t rely on political patronage to provide resources to the neediest and the hot spots,” Grijalva said.

The Indian Health Service did not respond directly to complaints raised in the online session, but said in a statement Friday that it is working hard with partner agencies to deal with a “rapidly evolving situation.”

“The potential public health threat posed by COVID-19 is very high,” the statement said. “We must be vigilant in our efforts to slow the spread of infections among our patients and within the communities we serve.”

The committee session came as Nez said the Navajo Nation saw the number of confirmed COVID-19 cases rise to 1,042 on Friday, 122 more than Wednesday’s total. The number of deaths from the virus rose to 41, he said.

Even though that is the third-highest number of cases per capita, outside of New York and New Jersey, Nez said federal funds are not being sent to the hardest-hit areas, like his. Allocation is being made instead by population, he said.

Beyond the immediate health concerns, speakers said the COVID-19 pandemic is as much of an economic catastrophe in Indian Country as it is in the rest of the U.S.

“Many tribal communities have found their entire revenue snapped off overnight. These tribal leaders are making impossible decisions,” said Minnesota Lt. Gov. Peggy Flanagan, a citizen of the White Earth Nation of Ojibwe.

With many tribal areas already struggling with poverty and high unemployment, Flanagan said, it’s even more important for Indian Country to pull together in the face of the pandemic.

“When it comes to COVID-19, we are all in this together,” she said. “During good times, we are often erased and forgotten, so during a time of crisis I find myself kicking and screaming and doing everything I need to do to make sure our people are seen.”

Speakers in the event raised a long-standing complaint about the federal government’s lack of respect for tribal sovereignty. Nez said tribes are being forced to apply for grants, which slows the process. 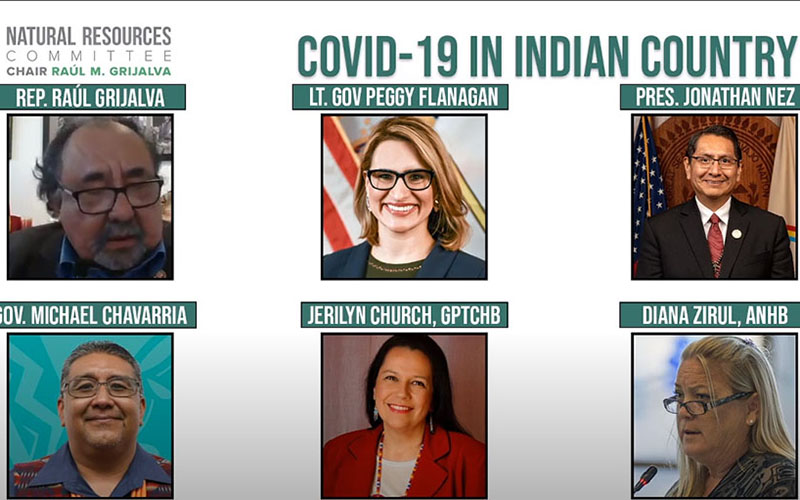 “Tribal leaders have been advocating for direct funding to tribal governments for a very, very long time,” Nez said. “And this is an emergency, and so you would think the money would go directly into tribal communities … but chairman, it has been very slow.”

Michael Chavarria, governor of the Pueblo Santa Clara Tribe in New Mexico, said tribes cannot get the help they need if they are not part of the conversation, but that no one in the federal government is consulting them. He said he was glad to hear that the Interior Department might pause its development of scores of policies.

“We urge the department to take the next step, which is to suspend any of these policy decisions and focus on addressing the response of this COVID-19 effort,” Chavarria said.

“Our relationship with the federal government is not race-based. It is based upon the political status of us as sovereign political governments,” he said.

Nez said the Navajo recently received rapid test kits from the government, but it can take many tests to calibrate the machines correctly and his tribe is only getting a finite number of tests.

But Nez said he is hopeful that Congress will “get things right” with tribal funding in an expected fourth stimulus package, and leaders at Friday’s event optimistic in general about the near future.

“A couple weeks ago, we were told that coronavirus … would wipe us all out. But I want to tell all our listeners today that Native American people are resilient. We are overcomers, and we will get through this together,” Nez said.