MARANA — Thousands of wild horses and burros roam across millions of acres of public land in 10 Western states, including Arizona. The Bureau of Land Management, which manages these herds, estimated last year there are 88,000 animals – more than three times as many as there should be.

The bureau says the number of wild horses and burros exceeds the “appropriate management level” and leads to depleted grass and water resources, “threatening the overall health of the public rangelands and degrading ecosystems,” according to the BLM’s website.

This means deteriorated health among wild horses and burros, which can lead to starvation, dehydration and death. The agency rounds up some of the animals yearly and works to find them new homes through adoptions.

The BLM estimates a manageable population would be 27,000 wild horses and burros. John Hall, the Arizona wild horse and burro program lead for the bureau, facilitated an adoption this month in Marana, north of Tucson.

He said the agency began its Adoption Incentive Program (AIP) last year, giving adopters up to $1,000 for an untrained wild horse or burro.

“I’ll typically adopt or sell close to 75 percent of them,” Hall said. “Now before AIP, we were seeing somewhere around 50 percent. It’s definitely bumped up our adoptions quite a bit.” 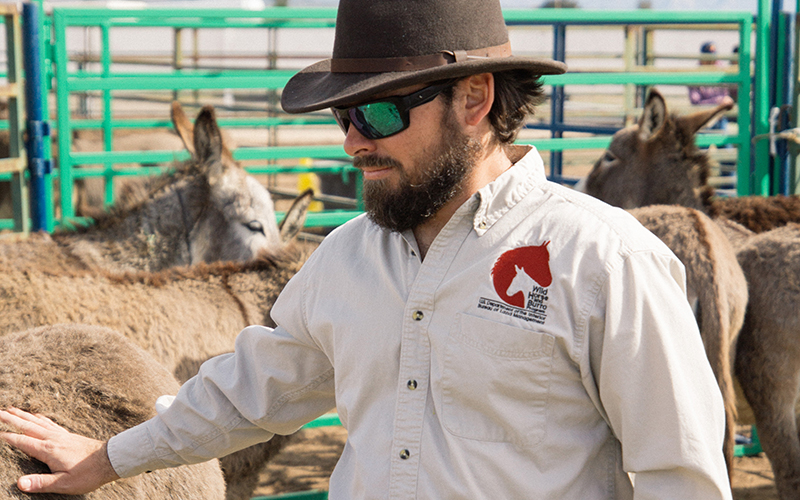 John Hall, the Arizona wild horse and burro program lead for the Bureau of Land Management, said the agency began its Adoption Incentive Program last year to give adopters up to $1,000 for an untrained wild horse or burro. (Photo by Michael Hannan/Cronkite News)

Hall gathers horses and burros for rotating adoption events like the one in Marana. At any given time, Hall has 450 to 1,000 animals in his care.

“We try to hit new spots every year so that people understand that we do have this program,” Hall said. “It really brings more attention to us, helps us actually get these animals in good homes.”

Rancher Steve Temple came to the Marana adoption in search of a burro to be a friend to a retired rope horse.

“It was excellent,” Temple said of the adoption process. “You know, we came through, we looked around, we looked at all the animals, and we found the staff helped us provide which ones were real docile.” 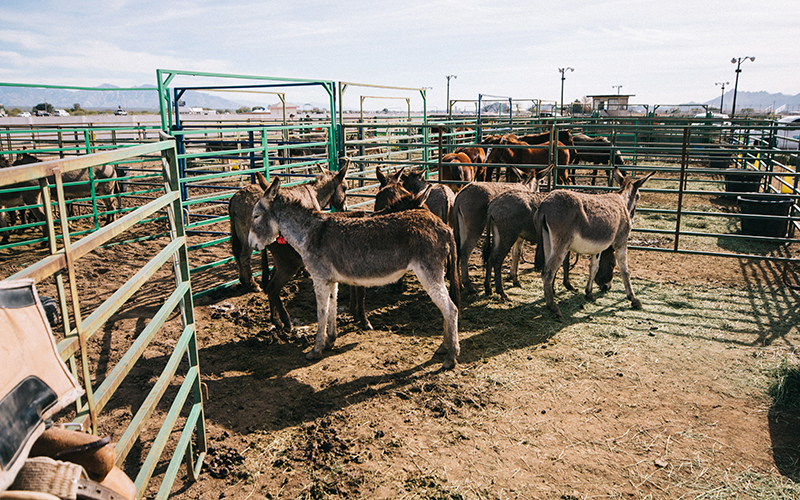 The Bureau of Land Management estimates there are 6,900 burros and 530 wild horses in Arizona. The BLM is rounding some of them up and making them available to the public for adoption. (Photo by Michael Hannan/Cronkite News)

“The BLM has been criticized from both angles, from the cattle growers to the horse advocates,” said Julie Murphree, who’s doing her doctoral research on wild horses at Arizona State University’s School of Sustainability. “One of the concerns I have with adopting the horses out is if the public is ready for this. It’s difficult to follow up, to see how they are doing once they are adopted.”

She’s not the only one who’s concerned. William Perry Pendley, the acting director for the BLM, has called the wild horse and burro issue one of the biggest challenges facing the agency.

“We have 88,000 wild horses and burros on our Western federal lands,” Pendley said. “We’ve increased our adoption program to get people to adopt these wild animals – that’s not going to solve this problem. It’s a tens of millions of dollars problem. But the bigger problem, for me, is the existential threat to the quality of these lands.”

In Arizona, some of the horses that are adopted already have been trained through a program with the Arizona Department of Corrections. The goal is to help reduce the population so overgrazing doesn’t happen.

Brandon Grede is one of the Arizona inmates who works at Hall’s facility to train horses for adoption.

“They come in wild and don’t want anything to do with you and will pretty much do anything to get away from you,” Grede said. But when the animals are ready to be adopted, “I mean, you can pretty much walk around without a lead rope and they’ll just follow you like a lost puppy.”

“You’re sad to see them go, but you’re happy because you know that they’re being spoiled and someone’s going to love them as much as you did,” he said.

Some of those trained horses and burros will be up for adoption at the end of April in Williams, where financial incentives will be offered.