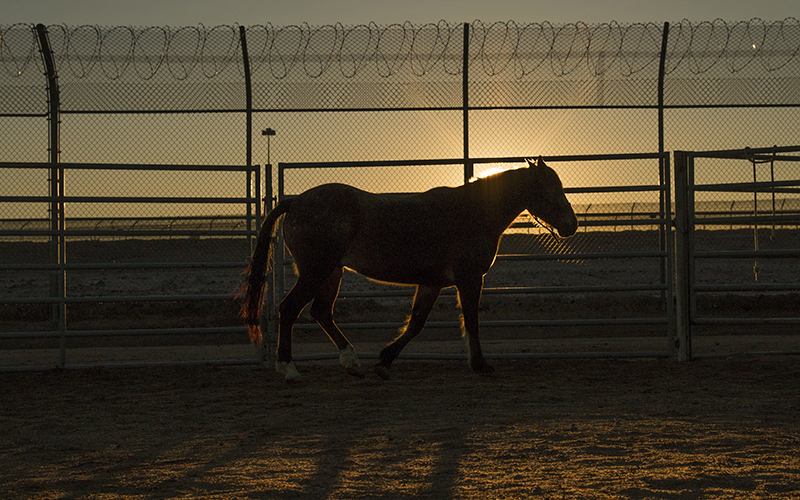 Starting at the crack of dawn, inmates handle horses at a state prison in Florence. (Photo by Blake Hemmel/Cronkite News) 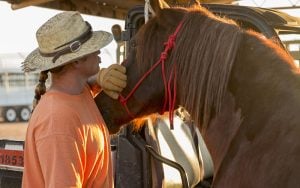 Rick Kline, an inmate at the Florence prison, says he has been a part of the wildhorse and burro program for six months. “It helps you work on yourself,” said Kline, while taking care of Bear. (Photo by Blake Hemmel/Cronkite News)

More than a dozen men in orange, with the initials of the Arizona Department of Corrections stenciled on their shirts, are caring for 35 wild horses and burros on grounds about 50 miles southeast of Phoenix. The men shovel fresh hay into stalls, the wind carrying wisps into the air. They start to groom the horses.

First, the animals need to be domesticated after they’re transferred from a holding facility. Inmates train and care for the horses and burros for three or four months at the prison.

Inmates gain an education beyond learning to train horses. 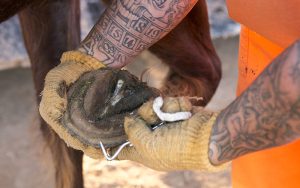 Inmate Rick Kline shows one of Bear’s hooves during his typical grooming process. Rick struggled at first to get Bear to lift his leg so he could clean out pebbles and dirt lodged in the hoof. Kline explained that if the hooves are left uncleaned, the horses can develop infections. (Photo by Blake Hemmel/Cronkite News)

Inmate “handlers” start “rehabilitating” horses and burros every morning before the sun rises, working until the early afternoon over several weeks to get the animals used to people.

Randy Helm, a BLM-appointed supervisor, said he expects the inmates to “ensure that the animal is cared for and the animal is progressing.”

That starts with prisoners cleaning stalls and feeding and grooming animals, brushing their coat and cleaning hooves.

The interaction with the animals is a series of steps, moving from teaching basic commands such as getting the horse to stand still during grooming to placing saddles and harnesses on them, then allowing people to ride them.

“The intent is to get as many horses adopted out as we can,” he said. Horses and burros are put to work, including for the Border Patrol, ranchers, and professional handlers who teach inmates how to handle the animals.

Horse and man are in the program to get a second chance. Helm said prisoners apply for the work, and he chooses them with an eye for character such as integrity, the ability to do manual labor and a willingness to grow from the experience. Good behavior also merits a consideration of their application. 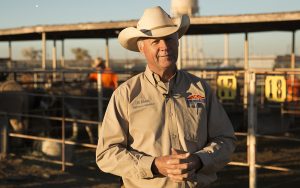 Program supervisor Randy Helm interviews the inmates who apply for horse and burro training program, and seeks out those who show a “willingness to learn.” Helm said few nmates who go through the program return to prison. (Photo by Blake Hemmel/Cronkite News)

The crime that brought them to prison doesn’t matter as much as their showing they want to change their lives, he said.

Helm requires those in the program to have a high-school diploma or started working toward their high-school-equivalency diploma, or GED, before he accepts them.

He said recidivism is low, with only two prisoners in the program have returned to the Florence facility over five years.

Kline, who has been in the program for six months, said taking care of a horse takes a lot of responsibility.

“It helps you work on yourself,” Kline said after tussling with Bear and his dirty hooves. “It takes patience and persistence to get the animals to trust and bond with the handlers.”

Kline said he wants to start his own horse training program when he is released in two years.