People wear face masks as they take pictures in front of the Olympic Rings at the Odaiba Seaside Park in Tokyo on March 6, 2020. (Photo by PHILIP FONG/AFP via Getty Images) 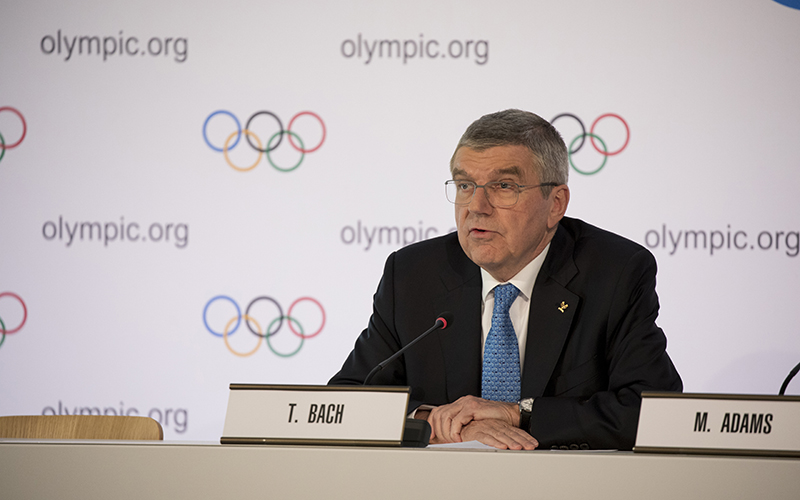 IOC President holds a press conference in Olympic House after the closing of the Executive Board Meeting on March 4th. (Photograph by Greg Martin/IOC)

LOS ANGELES – Athletes and fans alike fear that the 2020 Summer Olympics in Tokyo may be canceled or postponed because of COVID-19, the highly contagious respiratory disease that has killed more than 3,200 people around the world.

Opening ceremonies are slated for July 24, and the International Olympic Committee has announced it will have a final decision on whether to hold the games by the end of May.

“The IOC has the right to cancel the games only if they are not held during 2020,” Seiko Hashimoto, minister for the Tokyo Olympic and Paralympic Games, told parliament on Tuesday, according to the Associated Press. “This can be interpreted to mean the games can be postponed as long as they are held during the calendar year.”

If the Summer Games are delayed, athletes will need to alter training schedules to perform whenever they’re held. For now, Olympics officials are saying to stay the course.

“I would like to encourage all the athletes to continue their preparation for the Olympic Games Tokyo 2020 with great confidence and with full steam,” IOC President Thomas Bach told reporters Tuesday.

One expert applauded that recommendation.

“The Olympic committee is doing the right thing to keep the Olympics on,” said Dr. David Eisenman, director of the UCLA Center for Public Health and Disasters. “I think that it is way too early to be canceling them.”

There was chatter last month about moving the Olympics, when Shaun Bailey, the Conservative Party candidate for mayor of London tweeted:

We have the infrastructure and the experience.
And due to the #coronavirus outbreak, the world might need us to step up.

As Mayor, I will make sure London is ready to answer the call and host the Olympics again.https://t.co/1jJesWS1D6

That conversation doesn’t reflect current planning. World wars have caused the Olympic games to be canceled on three occasions: 1916, 1940 and 1944 (the 1944 games had been scheduled for Tokyo).

“Soccer matches in Middlesbrough, England, were canceled in 1897 due to smallpox, and games in Blackburn, England, were postponed in 1965 to prevent the spread of poliovirus. In 2001, hand foot and mouth disease halted equestrian events and the Six Nations rugby tournament in England. And in 1918, while Major League Baseball played on to increase American morale as threats mounted due to influenza and global instability due to war, the season was eventually shortened, ending in early September. More recently, in 2016, Major League Baseball games were relocated out of Puerto Rico to Miami due to fears concerning Zika virus transmission.”

In fact, although MLB games were relocated in 2016 and the Zika virus outbreak severely affected Brazil, the Olympics went on as planned in Rio de Janeiro, where there were 26,000 cases reported at the time. The illness, which is spread by mosquito, caused microencephaly in infants born to women who were bitten while pregnant. Microcephaly can cause infants’ heads to grow improperly, and it was blamed for 29 reported infant deaths.

For athletes, any delay could be tough to prepare for.

“It’s a really difficult position because you are thinking about your health and the virus that’s going around, but also you train so hard for that one moment and you don’t want to lose that opportunity,” Jessica Ennis-Hill, a British runner who won a silver medal in heptathlon at Rio, told Reuters.

But the coronavirus that causes COVID-19 is a different virus because it’s highly contagious, even if the infected person shows no symptoms. All sports have physical interactions in one way or another, but Eisenman said reducing interpersonal contact can be challenging in such sports as basketball, wrestling and boxing, even during practices and training.

“We should all be taking a high precaution, we should all be practicing hand hygiene and avoid touching our face after we have touched surfaces,” he said.

Since the outbreak of COVID-19 in central China in late December, it has been reported in 70 countries, affected more than 90,000 people and killed 3,200. The majority of deaths have occurred in older people and those with compromised health, health officials say.

USA Softball believes the IOC will do what’s best for their athletes when it comes to safety.

“USA Softball will support and stand by the decisions made by the USOPC, IOC and all necessary officials as it relates to the safety of our athletes and staff,” Dejah Mulipola, a Team USA and University of Arizona softball player, said in an email.

Outside the U.S., sports leagues have begun taking precautions by closing arenas to fans while games are being played. Japan’s Nippon Professional Baseball league announced teams will play the rest of their games without fans. In Italy, fans won’t be allowed to attend sporting events until next month because of the COVID-19 outbreak, which has caused more than 100 deaths in that country.

Other sports have had to postpone, relocate or cancel competitions to protect their athletes. March Madness could face changes if the NCAA takes a suggestion from the National College Players Association, which suggested March 2 that the NCAA consider barring fans from the college basketball tournament.

The cancelation of the Olympics also could cause financial problems for travelers and jeopardize the huge sums of money spent on hosting the games.

“I do worry about the effects on the economy,” Eisenman said, “and people already canceling travel plans.”