Signing autographs, as Texas Rangers outfielder Miguel Aparicio is doing for a fan in Surprise, has given some players moment of pause as concerns about the Coronavirus escalate. (Photo by Reno Del Toro/Cronkite News)

PHOENIX – As the world continues to deal with the impact of COVID-19, a novel strain of the coronavirus that has killed more than 3,000 people and infected more than 95,000 others across the world, concerns have seeped into the Arizona sports community.

The 15 Cactus League teams that hold spring training in Arizona received a memo from Major League Baseball recommending players don’t take baseballs and pens from fans to sign autographs. Scouts from the NHL Coyotes have been told to take precautions, and the state’s governing body for high school sports is taking its lead from the national federation.

“We have to be aware that it could potentially hit our area, and we want to be mindful and we want to prepare as we move forward,” said David Hines, the executive director of the Arizona Interscholastic Federation. “We don’t want to panic yet, but we want to pay attention.”

On a global scale, many sports organizations have taken aggressive action in order to prevent further spread of the disease. The status of the Summer Olympics, which are scheduled to take place in Tokyo, Japan, just four months from now, is in question. The IOC remains committed to holding the Games as scheduled, but talks of postponement or cancellation have come about in recent weeks.

In Italy, all sporting events – including Serie A soccer, one of the biggest leagues in the entire world – will be played without spectators for at least the next month. In Japan, preseason baseball games have already started to be played without fans in attendance. Switzerland has taken a similar stance, as all public gatherings with more than 1,000 people have been disallowed until March 15 at the earliest.

Arizona sports institutions currently in season, which include spring training, professional and college basketball, and high school athletics, have not taken steps as drastic as these quite yet. Despite this, those directly involved with these sports – like Milwaukee Brewers manager Craig Counsell – have started to take notice.

“We’re certainly talking about it and formulating how we’re going to have to address it,” Counsell said. “I think it’s a little bit on everyone’s mind. If something’s there, we want to do our best to be prepared.”

Major League Baseball does not have any current plans to cancel or postpone spring training games, but it did send out a memo to baseball officials recommending that players don’t take baseballs and pens from fans to sign autographs. Counsell understands why but regrets that this is the case. In his view, spring training is the ideal situation for young fans to connect with their favorite players. 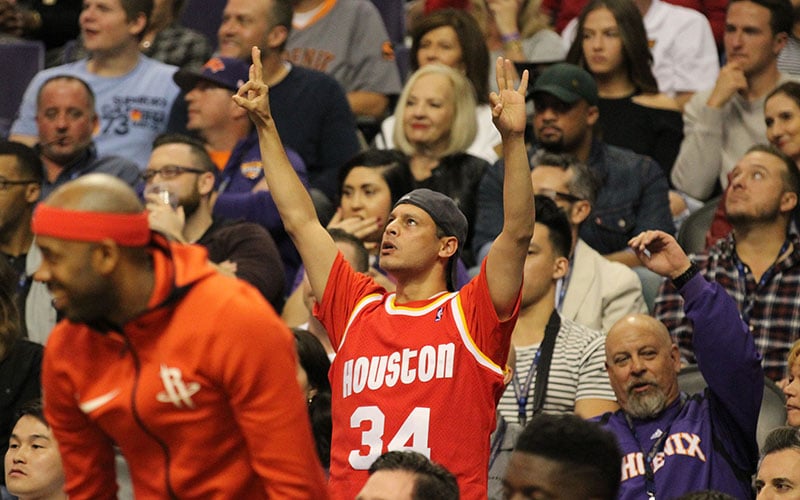 Many sporting events in Italy and other European countries are being played in arenas and stadiums without fans. That hasn’t happened in Arizona yet but pro and college teams are paying close attention to news about the coronavirus. (Photo by Jamie Nish/ Cronkite News)

“It’s a shame that that’s what this has gotten to,” Counsell said. “I think spring training is probably the best time for that intimate fan interaction with players and getting autographs, so it’s a shame if it was suggested otherwise.”

In a sport such as baseball where players are close together in the clubhouse and are constantly sharing the same ball on the field, the need for good hygiene is paramount. Giants catcher Tyler Heineman recognizes this, and he has received tips from the team as well as his wife, who is in healthcare, about things he should and should not do.

“I know it’s a big thing and a scare, but the best thing I can do as a person is try and take care of myself and be healthy, wash my hands and make sure I get enough sleep and nutrition,” Heineman said. “Just try and stay away from being sick. Whatever else happens, that’s out of my control.”

Similarly to baseball, the NBA has also sent out a memo to teams discouraging autographs and high-fives on the court. It is difficult to monitor these types of things, Suns coach Monty Williams said, but he believes his team has started to take the necessary precautions.

“I think everybody is aware and cautious, just because it’s something you have to take seriously,” Williams said. “We had a presentation a couple days ago to give us an idea as to what to look for, how to take care of yourself, and where it is across the country. I think all of our guys are cautious, but that’s about all I can say about it. I’m not watching to see if guys are fist bumping or elbow bumping or anything like that. You just hope everybody is trying to be as safe as they can.

“I think if anything were to happen, the team would be on top of it and make decisions based on the safety of our players and the safety of everybody around,” Williams continued. “The league has always been ahead of the curve in situations like this, so I’m sure that they have precautions in place. I’m hopeful that it doesn’t come to that, but we’ll see.”

Coyotes general manager John Chayka said his team is taking its lead from the NHL.

“At this stage, it’s still a day-to-day thing in terms of how things are evolving,” Chayka told The Athletic. “Our scouts are aware of some of the travel concerns and are warned to take precautions.”

The AIA, the governing body of over 260 high school athletics programs in the state of Arizona, has already started to be proactive in its efforts to stop the potential spread of the coronavirus at events. The AIA has already started to share information given to it by the National Federation of State High School Associations with its member schools, Hines said.

“We’re not the experts, so as an association, we rely on the experts,” Hines said. “We have a sports medicine advisory committee that we meet with made up of doctors and athletic trainers, and so anytime we do anything medical, we’re paying attention to the experts.

In Hines’ view, the AIA has been fortunate from a timing perspective. Sports like basketball and wrestling, which take place in small gymnasiums that are more likely to have parents and fans within close proximity of each other, recently had their respective seasons come to an end. Spring sports such as baseball and track and field that have recently begun their seasons, on the other hand, do not have this issue to the extent that their winter counterparts do.

Even so, Hines still recognizes the need to be vigilant in responding to the threat that the coronavirus poses.

“Most of the activities that we now have for the spring are outside activities, so we have a little less of an issue with a lot of confinement,” Hines said.

“But the big thing is, ‘Let’s pay attention and listen to the CDC and all the information that comes from the public health department,’ because they’re going to let us know where it is for us in Arizona and the issues that we’re having and how we can be supportive.”