Last month, California Gov. Gavin Newsom signed into law a bill requiring construction companies to educate employees about valley fever in areas that are prone to the fungal infection. Laborers and farm workers are particularly susceptible to Coccidioides spores, which are released when soil is disturbed. (Photo by Ralph Combs via Flickr).

SANTA MONICA, Calif. – California and Arizona make up more than 95% of all U.S. cases of valley fever – an infection caused by a fungus that lives in soil in the Southwest – largely because they share arid climates and have an abundance of outdoor workers.

New research finds that as climate change alters American landscapes in the coming decades, valley fever has the potential to spread far beyond the Southwest. Researchers at the University of California, Irvine predict the range of what’s colloquially known as “San Joaquin Valley fever” will more than double over the next 75 years, spreading to the Midwest and Canada.

“This disease, as we know right now, is not currently found in Canada, but by the end of the 21st century, it may even extend into a whole new country,” said Morgan Gorris, lead author of the study and recent UC Irvine Ph.D. graduate in Earth system science. 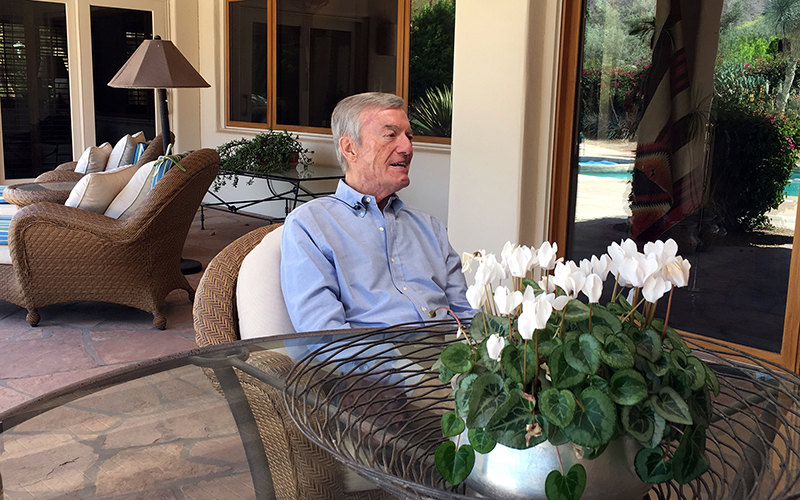 Gorris studied climate conditions in places where valley fever is most common and concluded that low rainfall and higher average temperatures allow the fungus to thrive. Areas with more than 10 cases per 100,000 people include Kern County in California and Maricopa, Pinal and Pima counties in Arizona, where average annual temperatures exceed 50 degrees Fahrenheit and annual rainfall is less than 23.6 inches.

Gorris then gathered climate projections from several climate models to estimate future temperatures and precipitation levels. She used that to estimate which counties might face outbreaks in the future.

“One way that I hope this research can be used is to really help educate our physicians that valley fever may be a potential risk in their area, so that they are aware to check for it when a patient comes in and shows symptoms,” said Gorris, who now works with the Los Alamos National Laboratory in New Mexico.

More than 1,000 Californians are hospitalized each year for valley fever – officially known as coccidioidomycosis – and roughly 8 of every 100 people hospitalized die from the infection annually, according to the California Department of Public Health. In Arizona, health officials say more than 8,200 cases of the illness have been confirmed this year.

Valley fever is spread by inhaling Coccidioides spores that become airborne when the soil is disturbed. It usually infects the lungs but can spread to other parts of the body in severe cases, according to the Centers for Disease Control. The infection also affects domesticated animals but is not contagious.

Farm laborers and construction workers are particularly susceptible to contracting valley fever because those who work the soil are more likely to inhale the spores. Symptoms usually mimic those of the flu, and recovery often comes without treatment. But severe cases may require antifungal drug therapy or surgical removal of cavities in the lungs, according to the University of Arizona.

Martin Chavez, vice president of the California chapter of the National Latino Farmers and Ranchers Trade Association, said most people in the California agricultural community grow up with some knowledge of valley fever, so he is supportive of any new legislation that increases awareness.

“You always hear about valley fever, but it’s not until you know someone who is hospitalized that you really know,” Chavez said.

One area in which the new California law is lacking, Chavez said, is the research aspect.

In May, identical bills were introduced in the U.S. House and Senate to “support endemic fungal disease research, incentivize fungal vaccine development, discover new antifungal therapies and diagnostics, and for other purposes.” The House version was introduced by Rep. Kevin McCarthy, R-Calif., and co-sponsored by Reps. Greg Stanton, David Schweikert, Raul Grijalva and Ann Kirkpatrick of Arizona. The Senate bill was introduced by Arizona Sens. Martha McSally and Kyrsten Sinema.

There is no cure for valley fever, but Chavez hopes to see one sooner rather than later.

“The ag labor force is not getting any younger, so we need to protect them whenever it comes to health care issues,” he said.

Dr. John Galgiani, director of the Valley Fever Center for Excellence at the University of Arizona, said misdiagnosis is one of the biggest mistakes made with valley fever. With so many transplanted newcomers in Arizona – Maricopa County is the fastest growing county in the nation – a big step toward protecting against the infection is educating the public on recognizing what to be tested for if they have the flulike symptoms, Galgiani said.

Valley fever researchers use $4.8 million grant to speed development of vaccine for dogs

“(Californians) really are familiar with it. They know somebody who had a really bad case of valley fever, but so many people who live in Arizona didn’t grow up here,” Galgiani said. “They moved here either for a job or to retire, and they don’t have the institutional or the residential memory about this disease.”

Although there’s no cure for valley fever, Galgiani said a vaccine is in development. The illness affects non-humans, too – 6% to 10% of dogs in Pima, Pinal and Maricopa counties contract valley fever each year, according to UArizona. However, most dogs recover with early diagnosis and intervention, as well as adequate antifungal therapy, the university said. It already has a vaccine candidate that shows efficacy in mice, and researchers hope to have one available for dogs by 2021.

“We thought we’d go for helping out pet owners first, and that in itself will get us a lot of happy people,” Galgiani said. “But I’m a physician and I would like to not stop there; I would like to see this go into humans, too.”