Supporters say e-cigarettes can help wean people off of tobacco, but critics say the devices, particularly those with flavors, are attractive to youth and are luring them in. (Photo by Vaping360/Creative Commons) 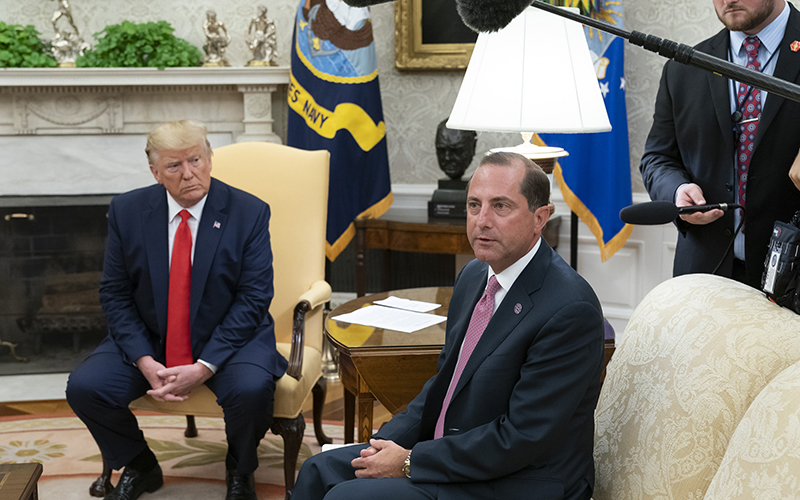 Health and Human Services Secretary Alex Azar, with President Donald Trump at a White House event to announce a plan to remove flavored e-cigarette products from the market to stem what he calls addictive to youth. (Photo by Andrea Hanks/White House)

WASHINGTON – Arizona vape-store owners were alarmed by the Trump administration’s announcement Wednesday that it plans to begin enforcing rules that would drive flavored e-cigarettes out of the market, an industry official said.

The surprise White House statement was in response to recent reports that vaping-related lung illnesses have been confirmed in 33 states and one territory – including six deaths nationwide.

The Department of Health and Human Services’ plan would target the flavored vaping liquids that critics say have led to an explosion of e-cigarette use among teens.

“Currently, about 8 million adults use e-cigarettes, but 5 million children are using e-cigarettes,” said HHS Secretary Alex Azar. “This is exceptionally harmful to our children.

“An entire generation of children risk becoming addicted to nicotine because of the attractiveness, appealability and availability of these vaping products,” he said.

Steve Johnson, executive director of the Arizona Smoke Free Business Alliance, criticized the plan as an “overreach and overreaction.”

“They’re much, much safer than smoking a cigarette and they’re certainly not the products that are tied into these pneumonia deaths that we’re seeing across the country,” he said of e-cigarettes.

“These electronic cigarette manufacturers are super crafty,” Humble said. “They’ve got really smart people that are working behind the scenes to figure out new ways to addict people, especially young people.”

It’s young people who Azar said are the focus of the new policy, which calls for the elimination of all flavors of vaping liquids – except tobacco-flavored.

“The Food and Drug Administration intends to finalize a guidance document that would commence enforcement to require that all flavors, other than tobacco flavor, would be removed from the market,” he said at the White House announcement.

Under the plan, the FDA would begin tightening a rule that requires vaping products to be approved by the agency. Currently, none are.

Azar said it will take a couple weeks to prepare the updated restriction, after which there would be a “30-day delayed effective date” to give manufacturers time to get the products off the shelves.

Johnson said his industry is open to reasonable regulation, but he argued that a ban on flavored vape products will force hundreds of Arizona businesses to shut their doors and thousands of smokers to lose a viable alternative to cigarettes.

He pointed to other potential culprits behind the reports of illnesses, including patients’ “illegal THC distillate” cartridges that have been found by New York health officials to contain vitamin E acetate. That’s an oil that is not used by vape liquid manufacturers, he said.

Johnson said e-cigarettes can help wean people off real tobacco, and that former smokers have been vaping for years without issue.

But health experts cite the vape-related illnesses elsewhere in the country and say Arizona might soon find itself among those states.

The Arizona Department of Health Services has yet to confirm any cases in the state, but media outlets have reported at least seven suspected cases of vaping-related illnesses in Arizona. And some health professionals speculate that number will grow.

“When clinicians and emergency department physicians identify things like this on an ad hoc basis, it almost always means that there’s a lot more behind the scenes,” Humble said.

Dr. Steve Dudley, director of the Arizona Poison and Drug Information Center, got a firsthand look at the affliction recently when his center handled a suspected case in Tucson.

“Patients who we’ve had in the poison centers who’ve been affected have gone on to potentially even need to be intubated – having a tube now to breathe for them,” Dudley said.

The Centers for Disease Control and Prevention said symptoms of vape-related illness includes coughing, chest pain, nausea, vomiting, fatigue, fever and weight loss. The cause of the vape-related pulmonary diseases has yet to be determined.

But health professionals said the ailment is not the only problem with e-cigarettes: Around 16 percent of Arizona high school students vape, according to the CDC.

Wayne Tormala, bureau chief for Tobacco and Chronic Disease at the Arizona health department, calls the popularity of vaping “a major public health concern.” He worries about possibilities of brain development and addiction issues.

Johnson said the priority for members of his association is to cater only to adults who smoke.

“Tobacco does have a history of targeting children and building people to addiction,” he said.

But Humble said every e-cigarette business is liable for contributing to the dilemma.

“For them to say that it’s all about adult smokers transitioning is just ridiculous,” he said.