State health department data show that an average of two people a day in Arizona have died of opioid overdoses – both illicit drugs like heroin and fentanyl and prescripion drugs – in recent years. (Photo by Johanna Huckeba/Cronkite News) 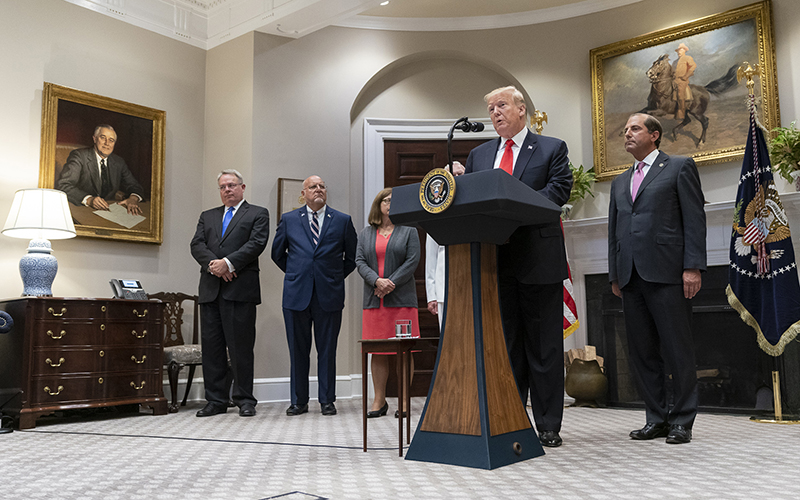 President Donald Trump, with Health and Human Services Secretary Alex Azar, left, and others, announces the release of $1.8 billion in funds for states to fight the opioid crisis. Arizona will get $20 million under the plan. (Photo by Shealah Craighead/White House)

WASHINGTON – Arizona will get more than $20 million in State Opioid Response grant funds from the federal government, part of $1.8 billion in grants the Trump administration said it was releasing to states Wednesday.

The grants, now in their second year, are designed to give states the flexibility to “meet the needs of their states” as they battle the opioid crisis, Health and Human Services Secretary Alex Azar said during a conference call with reporters.

“That can mean everything from expanding the use of medication-assisted treatment in criminal justice settings or in rural areas, be it telemedicine; to youth-focused, community-based prevention efforts; recovery supports, like employment coaching; and support for the distribution of naloxone,” Azar said.

The sole requirement is that states guarantee access to medication-assisted treatment at federally funded providers.

Officials with the Arizona Department of Health Services were not available to comment Wednesday on the grant and how it might be spent. But one health care provider in the state welcomed the funding.

Epley describes the opioid crisis as an “extremely pervasive” statewide problem. On average, according to the state health department, at least two people die every day in Arizona from opioid overdoses. In 2018, most were young adult men, the ADHS data show.

This is the second year Arizona has received $20 million in the first round of grants from the SOR fund, that can be used for opioid treatment, prevention and other recovery efforts. Last year, the state got a $10 million supplemental grant as well.

While state officials were unavailable to comment, the Bipartisan Policy Center reported earlier this year that most of Arizona’s SOR funding in 2018 went toward recovery and treatment, with a goal of providing services to 16,476 individuals over two years.

Gov. Doug Ducey declared a state of emergency in 2017 in response to the skyrocketing number of opioid overdoses in the state. That emergency was lifted with the 2018 passage of the Arizona Opioid Epidemic Act, which called for better reporting and tighter restrictions on opioid prescriptions.

Kam Gandhi, executive director of the Arizona State Board of Pharmacy, said his agency is already seeing progress in a drop in prescription volume and pill count, which means fewer drugs for consumption.

“There’s a long way to go to see a significant improvement, but we are seeing some traction in that direction,” Gandhi said Wednesday.

He encourages state health professionals to practice “smart prescribing” as one way to reduce the drug epidemic.

Epley said opioids are the most common substance abuse problem he faces with patients. Drugs considered opioids include illicit drugs like heroin and fentanyl as well as prescription drugs, like oxycodone, codeine and morphine.

“I see people that come through our facility and programs like ours that are dying on a very regular basis,” said Epley. “It’s not just a number that I see. It’s people that I’ve met and worked with.”

He encourages anyone in need to seek help, adding, “Nobody should have to attempt to recover on their own.”

During a White House announcement of the grant Wednesday, President Donald Trump said the government has “done a really good job with opioids and getting people to stop using them and prescribing them.”

Still, Epley said that while prevention is important, treatment is the more pressing issue given the scope of the problem.

“Having somebody wait a week or two for a bed at a state-funded facility,” Epley said, “they might not make it that week or two.”