GOODYEAR – Rachel Miller’s chestnut hair is tied up in a ponytail that slides halfway down her back. She’s wearing steel-toe boots that are ripped at the seams and a plaid button-up over a gray T-shirt. Her clothing reflects a gap in women’s wear, where trade uniforms are rarely made for them.

Through safety glasses, Miller surveys her workplace, a warehouse next to the Goodyear Airport.

She’s a welder, and she’s ready for the day.

Miller is a modern-day Rosie the Riveter, who became the face of thousands of American women who worked defense-industry jobs so that men could fight World War II. Miller, too, is doing a job that’s mostly done by men.

Miller grew up watching her father, a trucker, work on trucks and engines. The work was tough. As a woman, she never saw it as a career option.

Welding wasn’t her first career choice after college. In a recent interview, she talked about trading her daytime khakis for girlie dresses, combating stereotypes and harassing remarks, loving the work and developing her power.

1. She shifted from social work to welding

Miller works at Gorbel Inc., which makes work stations and material handling cranes and fall-protection products. The company has only a few female welders at its 50,740-square-foot Goodyear facility, she said.

“I’m all for girls who go against the grain, against the norm, who aren’t afraid to get their hands dirty or work hard,” Miller said. “It makes me proud to be one of them because there’s not a lot of us. I take pride in it.” 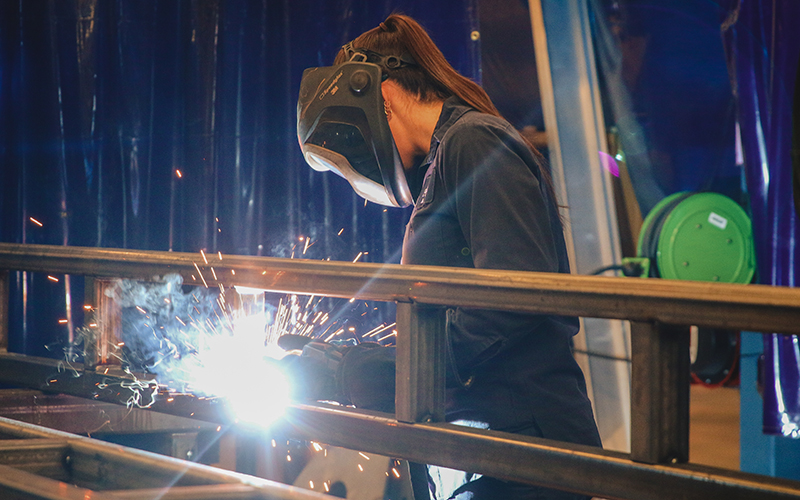 As a welder, Rachel Miller works on material-handling cranes and fall-protection products at Gorbel Inc. in Goodyear. (Photo by Thalia M. España/Cronkite News)

Miller has been welding for four years, although such a career was never something that would have crossed her mind when she was weighing what to do after high school. She graduated from Arizona State University and worked as a social worker, but it wasn’t fulfilling.

Trade jobs weren’t something that was pushed as an option in high school, especially for women, who were encouraged to pursue careers that followed along traditional gender roles, Miller said. It was simply about going to college and getting a good job.

Switching from social work to welding uncovered her passion.

2. The fear of being judged drives her harder

Miller says things are great at Gorbel, but it hasn’t always been that way.

About 47% of women in the U.S. are employed, according to the U.S. Bureau of Labor Statistics. Of those, 4.5% work in welding, soldering and brazing, 2.2% work in carpentry, 3.3% work construction and 2.4% work in automotive repair.

Miller feels she has to go the extra mile to prove herself. 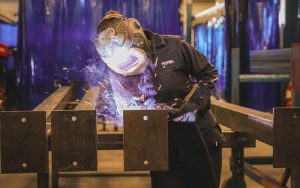 About 47% of American women are employed, according to the U.S. Bureau of Labor Statistics. Of those, 4.5% work in welding, soldering and brazing. (Photo by Thalia M. España/Cronkite News)

“I don’t get intimidated very easily, but being in this industry I do because, I guess in my head, I’m afraid that the men will judge me. That’s what drives me to work harder so I can prove myself to be as good, if not better, than most of them.”

3. Misogyny is common in the industry

Miller describes a previous supervisor as “misogynistic and sexist.”

“He would always be like, ‘Go make me some coffee!’ It got really old, really fast. He did it to be funny, but it was not.”

Miller also recalled “the most disgusting thing” at a previous job when she was loading some stairs onto a flat trailer. When her supervisor passed by, he made gestures of throwing imaginary dollar bills at her, insinuating she was in the same position as a stripper, Miller said.

4. Miller often begins work before sunrise, and that’s fine with her

At 6 a.m. each day, she grabs the day’s work order and collects the metal pieces that she needs for the day. She powers up the welding machine by her workstation, which includes rulers, a hammer, chalk, color tags, two welding helmets and various tools and safety equipment

She rapidly runs a flat piece of chalk against the table, sharpening it to make accurate measurement marks. The functionality of products made at Gorbel, Miller said, depends on getting the math and measurements correct.

Miller and another female welder, Jeanine Begay, work in the same welding bay. All the bays are all in the middle of the warehouse, and each is enclosed by translucent, protective welding curtains made of vinyl. Occasional flashes of bright blue dance inside the bays, similar to a flash of lightning. It’s like a mad scientist at work in a sci-fi movie lab. 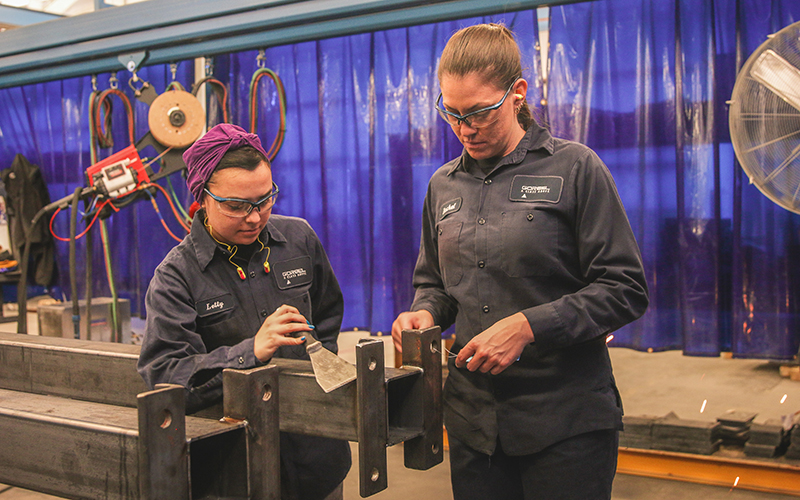 Leticia Rodriguez (left) and Rachel Miller are co-workers at Gorbel. “I’m all for girls who go against the grain, against the norm, who aren’t afraid to get their hands dirty or work hard. … I take pride in it,” Miller said. (Photo by Thalia M. España/Cronkite News)

Welding sounds like crackling fireworks coming at you from every direction. Even the smoothest weld sizzles.

With her helmet on for eye protection, Miller sets focus on every weld she makes as she leans in closely, sparks flying around her.

5. Miller has developed a sense of her own power and femininity

“This is Safety Samantha,” Miller said, pointing toward a metal contraption she created that stands at the entrance to a Gorbel warehouse.

Safety Samantha’s head is a metal square that has linear scrape marks up, down and side to side. Her eyes, made of washers, seem to sparkle. Random pieces of metal create her triangular nose and her squared smile. In her elongated body, she holds the key to all the safety needs in the warehouse. Her warm yellow arms are raised, elbows folded as she holds two blue buckets, one in each hand, filled with safety shoe covers called clogs. Her “stomach” doubles as a shelf that holds a box of Laser Lite ear plugs. She’s wearing a skirt made from strips of a cut-up lavender towel.

Safety Samantha symbolizes Miller’s empowerment on and off the job.

“It’s hard to feel feminine when I do so much ‘manly’ stuff,” Miller said. “I’m a welder, I like riding motorcycles, I shoot guns, and I like to go camping and ride my dirt bike. I do a lot of ‘male typical’ things. So it feels nice when me and my girls, we get all dressed up just to go out for dinner. It’s like, ‘OK, you’re so cute sometimes!’