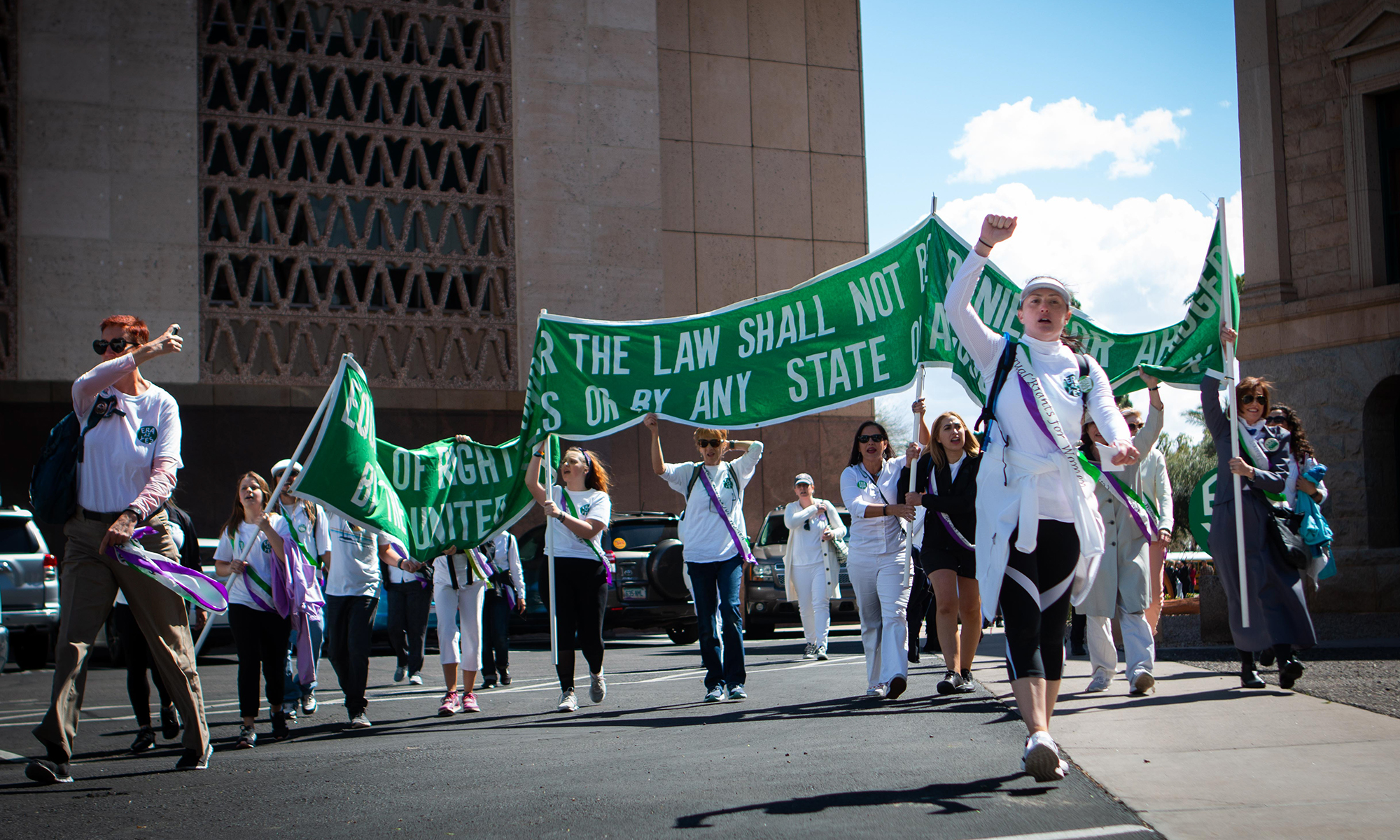 Chanting and singing, marchers arrive at the Capitol after completing the final miles of their 38-mile walk in metro Phoenix in support of the Equal Rights Amendment, which needs one more state for ratification. (Photo by Delia Johnson/ Cronkite News)

PHOENIX – Supporters of the Equal Rights Amendment marched 38 miles over three days in support of making Arizona the last state needed to ratify the sweeping change to the Constitution. But on Wednesday, their efforts fell short in the Senate, and the ratification effort in Arizona appears to be dead.

Advocates argue that the ERA is crucial despite progress on women’s rights in America. They point to a continuing wage gap and attempts nationwide to restrict women’s reproductive rights as reasons for the ERA.

Congress passed the ERA, which would guarantee women and men equal protection under the law, in March 1972 and submitted it to the states for ratification. Nearly 50 years later, supporters still need a 38th state to ratify it.

After a rally at the Capitol Wednesday, Senate Democrats attempted to suspend Senate rules to take their resolution to the floor for a vote. After a two hour discussion, they failed to muster the votes needed.

Resolutions that Democratic lawmakers introduced in the GOP-led Legislature to ratify the ERA have been blocked by Republican leadership.

Opponents say women already enjoy the same rights men do under state and federal legislation and elsewhere in the Constitution. In addition, it’s unclear whether it would be legal to add the amendment to the Constitution, they say, leading to years long wrangling in Congress and courts.

About 100 women and men gathered Monday at the state Capitol to put pressure on lawmakers to ratify the ERA. Many wore white to pay homage to suffragettes, and green, white and purple sashes that read “Equal Rights for Women.” A large green banner with white text, similar to ones suffragettes carried a century ago, swayed gently behind the crowd.

On Wednesday, supporters were back at the Capitol to press their point.

“Here we are in 2019 with one more state left to ratify so that every single woman and boy and man in this country can have equality in the highest governing document – the United States Constitution!” said Rep. Athena Salman, D-Tempe.

Women said they want equal pay and more reproductive rights, some saying they were second-class citizens.

Over three days, more than a dozen people made their way across town, through sunshine and rain, passing by sites significant to women’s progress. At the end of the first day, the group stopped at the Sandra Day O’Connor House in Tempe.

O’Connor, the first female Supreme Court justice, also introduced the ERA to the Legislature when she was a state senator. That effort failed.

Marjorie Signer, who came from Virginia to march, said she has always identified as a feminist, but for years didn’t pay much attention to the ERA. Women have made progress and the 14th Amendment, which guarantees all citizens “equal protection of the laws,” protected them, she believed. She thought that going back and trying to pass the amendment nearly four decades after it failed only highlighted the failure.

Then, she volunteered for the Virginia’s National Organization for Women.

Her views on the ERA changed this year, when a woman who worked on passing the ERA stepped down from the organization. Signer took over. She met others committed to the cause and realized it wasn’t just about women – it was about democracy and equality.

Other advocates said the amendment, which would establish equal rights between men and women, would outlaw legal gender discrimination. Others want equal pay for equal work, saying the ERA would help level the playing field for genders. Nationally, women make about 80 cents for every dollar a man earns.

Some opponents have said that the 14th Amendment, which guarantees all citizens “equal protection of the laws,” covers women and prevents discrimination.

Cathi Herrod, president of the conservative Arizona Center for Policy, said the pay gap is a “false argument.” She said women are making different decisions about their education, careers and the number of hours they work, which accounts for discrepancies in pay.

Numerous state and local ordinances across the U.S. protect women against discrimination.

Herrod pointed to the Equal Pay Act of 1963, which requires men and women be given equal pay for equal work in the same establishment, and the Lilly Ledbetter Act, which overturned a Supreme Court decision that restricted the time people had for filing complaints of employment discrimination, to illustrate that equal pay is already the law.

Herrod also said the ERA would “enshrine abortion in the U.S. Constitution.”

The Eagle Forum, founded by Phyllis Schlafly, who successfully campaigned against the ERA in the 1970s, says on its website that the ERA would also overturn protections for women, such as forcing them to sign up for the draft.

The resolutions, penned by Sen. Victoria Steele and Rep. Pamela Powers Hannley, both Tucson Democrats, did not get committee hearings by the required deadline in the House or the Senate. Lawmakers who wanted to vote on this resolution were forced to finagle their way through the Republican-led Legislature.

Even if Arizona had become the deciding 38th state to ratify the ERA, it’s unclear whether the amendment would ever become law.

Congress initially sent the ERA to states for ratification in 1972. Congress extended the original seven-year deadline to 1982. However, by that deadline, only 35 of the 38 constitutionally required states ratified the amendment. Nevada ratified the ERA in 2017 and Illinois in 2018.

Advocates contend Congress can change the time limit on the ERA, as it did in the 1970s, but Herrod said when the congressionally extended deadline expired in 1982, lawmakers did not extend it again. She called the ERA a “moot issue.”

Five states have also tried to withdraw their ratification, though some ERA supporters say those withdrawals are not valid based on precedent created during the ratification of the 14th, 15th and 19th amendments. 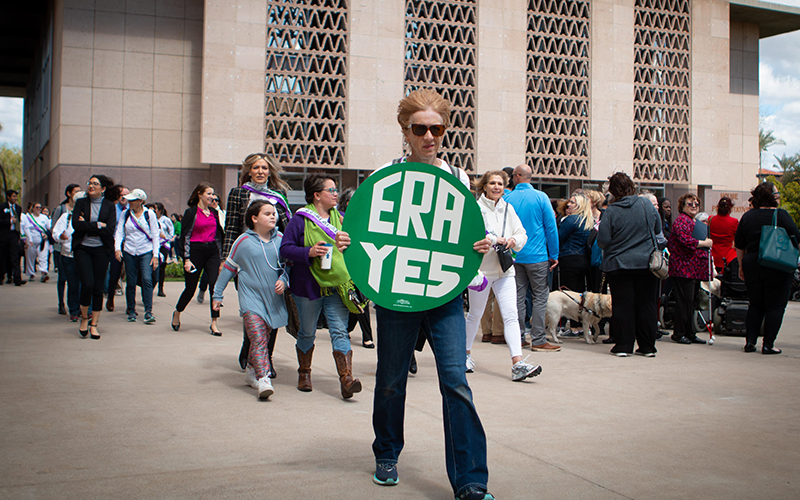 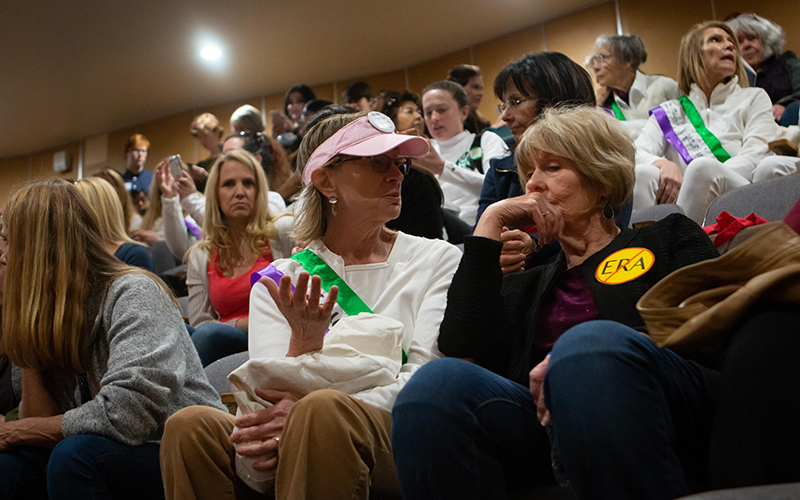 ERA supporter Julie Karcis has a conversation with Marca Epps, who opposes the amendment, in the Senate gallery. (Photo by Delia Johnson/ Cronkite News) 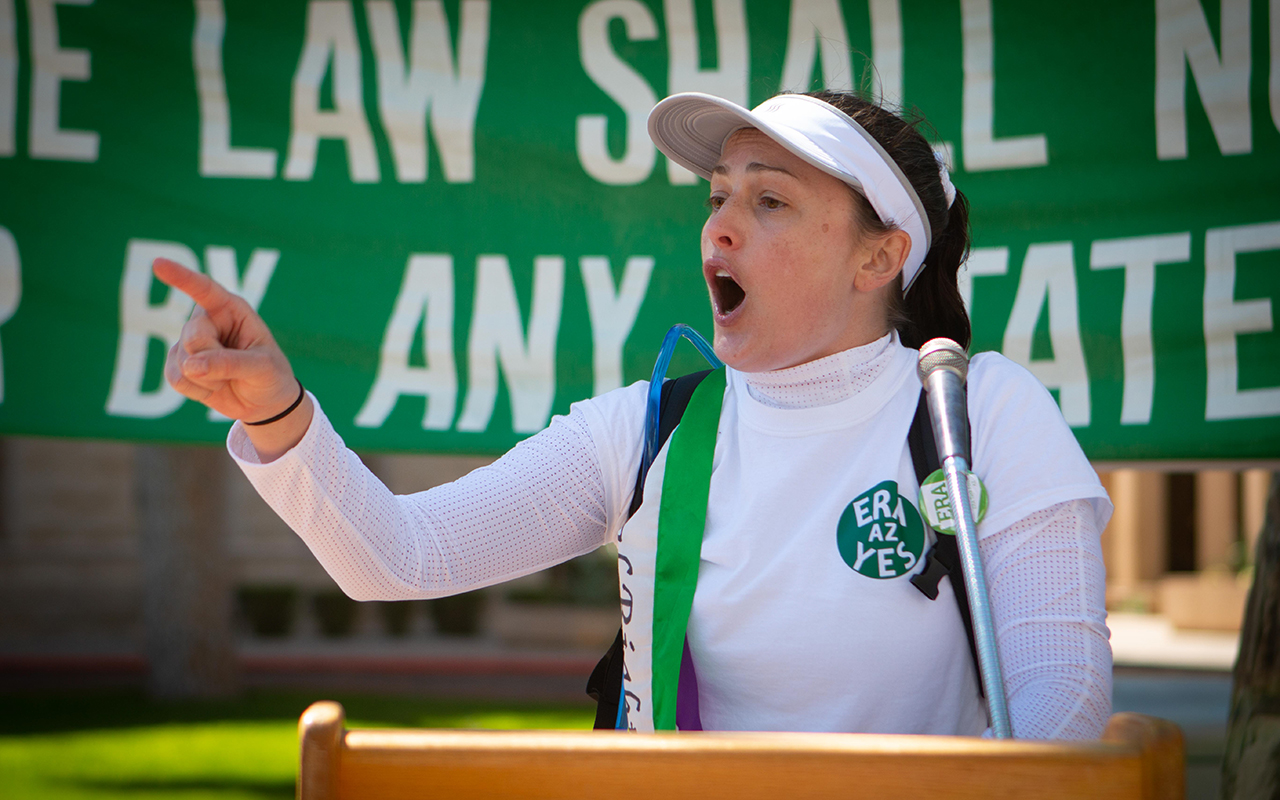 Community activist Kim Mundis, who organized the 38 Miles for the ERA march, speaks at the Capitol in favor of the Equal Rights Amendment. (Photo by Delia Johnson/ Cronkite News) 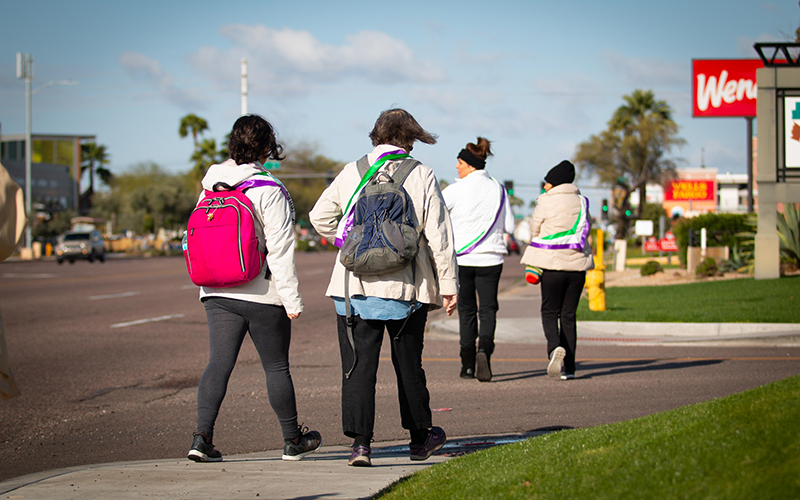 Supporters of the Equal Rights Amendment march to the Capitol from Sen. Kyrsten Sinema's office in Phoenix on Wednesday. (Photo by Delia Johnson/ Cronkite News)

Cindy Harrison holds up a sign at the Equal Rights Amendment rally Wednesday morning at the Capitol. (Photo by Delia Johnson/ Cronkite News)