PHOENIX － Jessica Sauter moved from San Diego to Phoenix in November, and like many young mothers, she searched for ways to keep her 3-year-old occupied. She and Bodey spent many days at the park until a neighbor told her about the Creighton Family Resource Center.

Mom and son regularly make it to the resource center. Some of her afternoons are spent in parenting classes and others in arts and crafts with her son.

Food pantry. Parenting classes. Tiny library. Reading skills for preschoolers and other children. Maricopa County has more than 30 family resource centers, from Buckeye to Chandler, that offer services to children, parents and guardians.

The centers take a holistic approach to child development, where reading and social skills are early markers of long term success. In Arizona, reading ability and other education markers are ranked consistently low compared with other states.

Not every center offers the same services. According to education advocacy group First Things First, all are based on building a parent-child support system.

Representatives of First Things First said the Creighton center in west Phoenix and others are geared toward the healthy development of Arizona children. Many centers are located near libraries, churches and schools.

“Each of these locations is a key cornerstone in its community and will make these resources far more accessible,” Phoenix Mayor Kate Gallego said at a news conference this summer at Burton Barr Central Library, home to a recently opened center.

First Things First, which helps finance the centers, says they serve families with little to no resources and take a well-rounded approach to the crucial first years of a child’s development, from birth to age 5, according to the organization’s website. 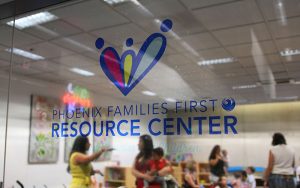 A study by Harvard University’s Center on the Developing Child shows more than 1 million new neural connections are formed every second in the first few years of life. According to First Things First, 90 percent of a child’s brain develops before age 5.

Early childhood experiences affect the outcome of either a sturdy or fragile foundation for learning, health and behavior.

The Harvard study also concluded that a major factor in a child’s development process is the relationship between a child and their parent or caregiver. Young children naturally reach out for interaction through facial expressions, babbling and other common behaviors. When there is no response to their interaction, the brain does not form as expected and can lead to inconsistencies in behavior and learning.

First Things First invests in early childhood funds to ensure that those inconsistencies are prevented. According to the organization’s website, about 22 percent of their investments go toward the resource centers in hopes of strengthening families and providing parents with the tools needed to be their child’s first teacher.

“Everybody wants to be a good parent, but children don’t come with an instruction manual,” Alvarez said. “And sometimes we all need a little bit of help.”

As a new mother, Sauter struggled to establish a routine for Bodey. After attending parenting classes at the center, she set a routine for him at home.

“We kept going with the classes and activities that the center offered and now I can see a big difference in the behavior and attitude of my child,” Sauter said. “If the classes didn’t happen so often, I think it would be more difficult. With Bodey, I need persistence.”

Many of the centers provide families with other resources, such as food pantries and clothing centers that are open and available to the community weekly at no cost. 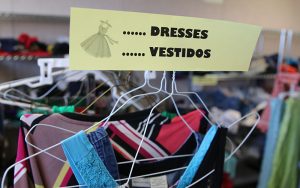 “We were open for about a week and probably everyone who came in asked about food,” said Leslie Owen, who manages the center. “Food insecurities ares really prevalent in this area.”

Other activities and resources include parent education classes, kindergarten readiness boot camps and other literacy activities that promote reading and parental involvement.

Parents and guardians involved in their child’s education promotes language growth and literacy.

According to a study by the University of Melbourne’s Faculty of Business and Economics, reading to children ages 4 and 5 every day has a significant positive effect on their reading skills and cognitive skills.

The family resource centers use such research on early childhood education to implement programs and activities.

The Creighton center started a program called Raising a Reader, where families can check out a bag of books to read throughout the week and return them at the end of the week. Representatives from the Phoenix Public Library also attends the resource center once a week to read to the children.

“Another thing I love about the center is that he now likes to read,” Sauter said of Bodey. “I bring him every time there is a reading class.”

“He has a mentality that learning is fun.”

The University of Melbourne’s research also shows that reading storybooks to children is one of the most crucial activities in developing the knowledge that is required for eventual success in reading.

The most recent center opened in July at the Burton Barr Central Library near downtown Phoenix. Gallego and others attended an open house and ribbon-cutting.

“Our next generation is our inspiration and we want to do everything we can to deliver for them,” Gallego said.

“I feel lucky to have found the Creighton Family Resource Center,” Sauter said. “I will be looking forward to hearing more awesome news from this center in the future and how it has changed other lives for the better.”