Arizona education gets low marks on another annual report card 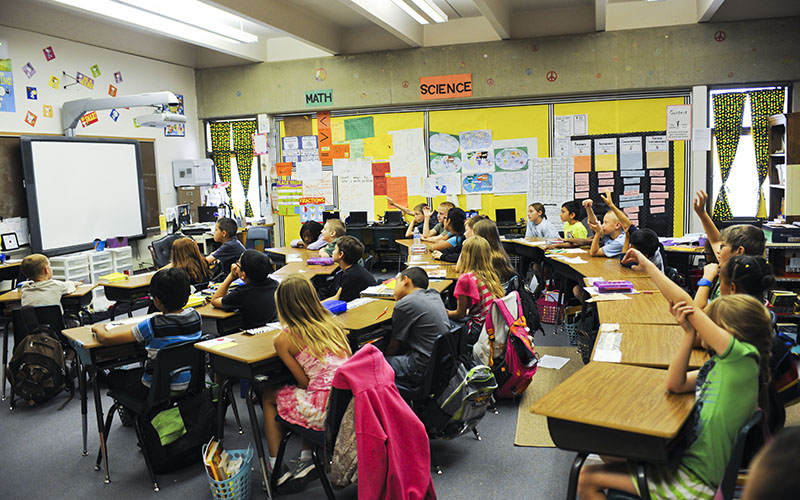 Students at Borman Elementary School at Davis-Monthan Air Force Base in Tucson. Arizona is ranked 45th in the U.S. for education by the publication “Education Week.” (Photo by Sivan Veazie via Creative Commons)

PHOENIX – Arizona education scrapes the bottom ranks in the nation, receiving a D+ for school funding and the poverty achievement gap in an annual report card released Wednesday.

Arizona ranked 45th among the 50 states and the District of Columbia in the “Education Week” rankings for 2018, with a score of 68.7. But the U.S. as a whole didn’t score much higher: It got a C. Only 12 states received higher than a C+ overall score.

The D+ ranking is not new to Arizona: The state’s grade has not changed since Education Week – a national newspaper for education topics, published by Editorial Projects in Education, a Washington, D.C.- area nonprofit – updated its grading category three years ago.

“It’s not surprising. It’s a little disappointing,” she said. “Arizona has always been at the bottom of these lists.”

Arizona’s schools earned a C in the “Chance-for-Success” category, which measures the poverty gap, looking at factors such as parents’ education attainment, job longevity and income.

Academic achievement, including math and reading scores and graduation rates, earned a C- in the “K-12 Achievement Index” category.

But school financing is still dismal, according to the report’s grade of a D- placing Arizona No. 46 in the nation. The national average for financing was a C.

In his 2018 State of the State address last week, Gov. Doug Ducey vowed to focus on improving education.

“Let’s spend these dollars – tens of millions of dollars combined – where they can go to better use: In our public schools and for our teachers,” Ducey said.

Much of the governor’s proposed $10.1 billion budget is devoted to education, which Hart called a step in the right direction.

“What the governor proposed is a budget that’s focused on education,” she said. “That could be really powerful. Our schools have been without resources for so long, and were really hit hard during the recession. The money still hasn’t come back to them completely. I think it’ll make a difference for schools.”