PHOENIX – Neon strobes flash as the eager crowd hollers and holds their drinks aloft. Music blares from the speakers as the emcee announces Rosie Cheeks, who strides onstage in high heels and a wide, black cape, ready to reveal her sparkling jumpsuit to her fans.

Before Rosie Cheeks can strut her stuff, Steven Juniel takes hours transforming himself through makeup, wardrobe and glitter. Lots of glitter.

Juniel, an up-and-coming drag queen in Arizona, self-described as “large and in charge,” said he wants to represent queens of color and those of different sizes.

“I kind of want to be that person to inspire others,” he said.

Although drag is becoming more mainstream with the help of social media and such shows as “RuPaul’s Drag Race,” the art of drag dates to ancient times, when women were not allowed to act in theater.

Theater is where Juniel got his start. Juniel had performed in local music theater for years before he decided to try drag, but he always knew it was something he wanted to do.

“My grandma, when I came out, I remember her dropping me off at Pride and being like, ‘does this mean you want to dress up in girls’ clothes now?’ ” Juniel recalled. “At the time I was like, ‘No, Grandma, I just want to go to Pride and have fun.’ But now, thinking about it, I’m like, yeah!”

With the support of his family and friends, he started performing as Rosie Cheeks last year. Becoming Rosie helps him feel more comfortable as Steven, he said.

“I feel more confident in myself,” said Juneil, 24. “Not just in both personas, but in general. Just being who I am,” he said. “It kind of helped me be, OK, I’m OK with being me and it’s fine if other people don’t like it. I’m still going to be me.”

The road for Juniel hasn’t always been easy. He says as a black drag queen, people constantly try to limit queens of color. 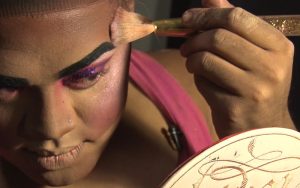 “There are a lot of negative stereotypes about queer people of color or even queens of color,” he said. “I’m trying to stay out of the realm of what everyone thinks of queens of color. They think about them doing hip-hop music and certain types of genres.”

Black queens continue to be a major influence on the drag community. Some influences have even transferred over into mainstream pop culture. Terms like “shade,” “henny,” and “tea” have become part of the public’s everyday language, according to Marlon Bailey, an associate professor of women and gender studies at Arizona State University.

“I think that black drag queens created and contributed and continue to offer a particular kind of drag performance that encapsulates black, urban working-class kind of expression and performance craft that departs from some of the other drag performances that we’ve become accustomed to,” he said, adding that drag should be recognized a serious, creative craft.

Juniel delivers a serious message while having fun as Rosie Cheeks. He remembers being bullied as a child for being a big kid.

“I want to use my drag as kind of a voice for the bigger LGBTQ kids who are scared to be themselves just because they are large or overweight or heftier in size,” he said as he patted foundation on his face.

“Yes, people will call you names, hate on you when you do things to make you feel bad, but you are not alone. Somebody is there to help you and support you and help you get through this.”

Then, face freshly powdered and fake locks falling perfectly on her shoulders, Rosie Cheeks hit the stage to lipsync a remix of Ariana Grande songs before an adoring crowd, screaming her name.