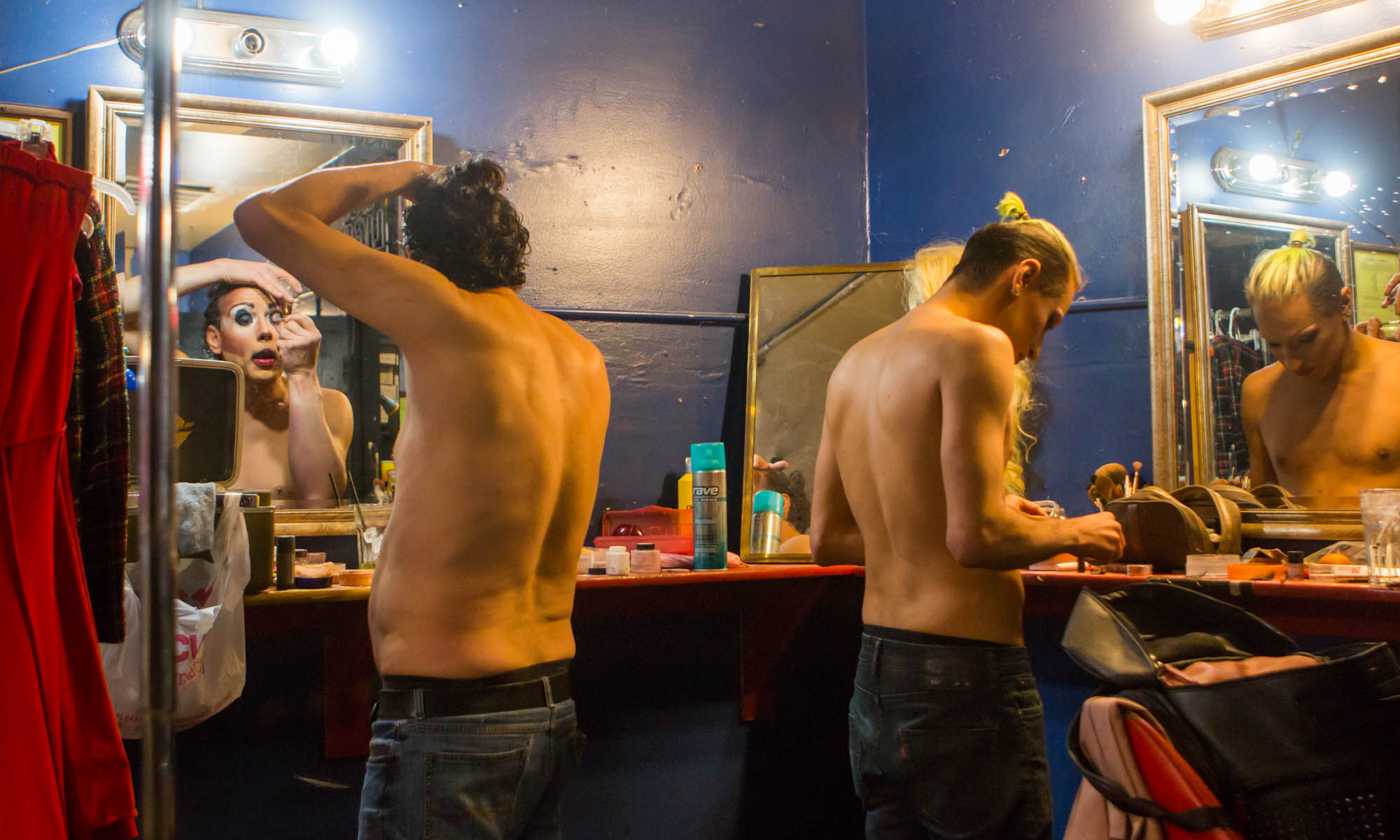 Celia Putty (left) and Benaddiction work on their makeup backstage before a drag performance at The Rock in Phoenix. (Photo by Delia Johnson/Cronkite News)

PHOENIX – Diverse drag performers are challenging norms in Phoenix’s nightlife. Drag kings, assigned female-at-birth queens, alternative performers and people of color are taking stages across metro Phoenix. We talked to performers about the challenges they overcame to establish themselves in the local drag scene. 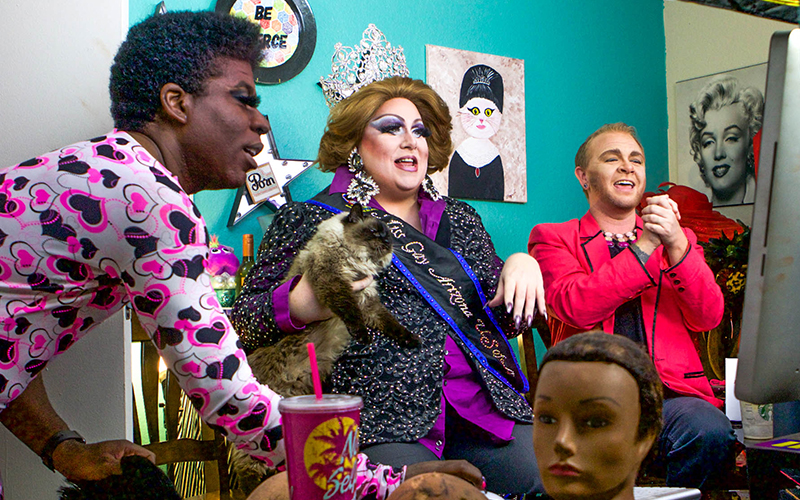 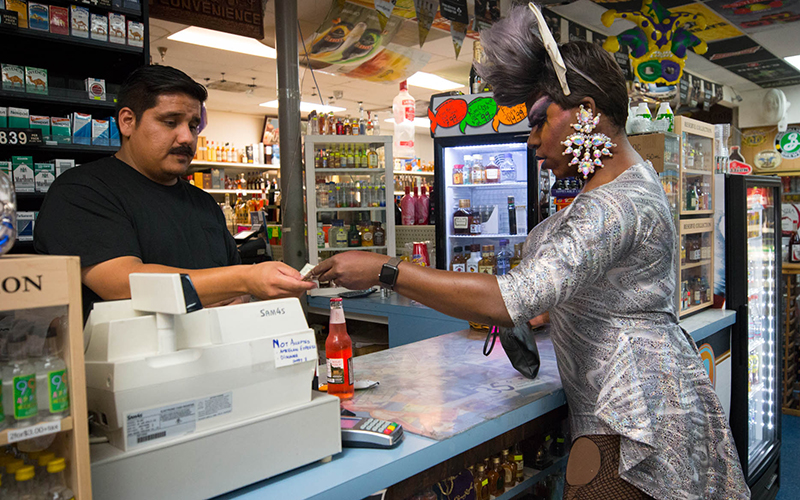 Minor buys snacks at a convenience store she frequents before hosting bingo night. Although she sometimes gets looks from customers, employees of the convenience store aren't fazed because she often shops there. (Photo by Delia Johnson/Cronkite News)

Offstage, a full manicure is the only sign of Patrick Jervis-Stone’s alter ego. Most of his co-workers at his day job as a social media and brand manager don’t know Jervis transforms into campy pageant queen and show host Felicia Minor.

“I like to keep my worlds separate,” he said. “We don’t like to be put in boxes, but we operate so well in boxes.”

Click and drag the slider to see Felicia Minor transform.

As a gay, African American performer, Minor has struggled to feel accepted.

“I had a problem myself being proud of who I was, as a black male living in a very white state,” Minor said. “Being in the entertainment world, it feels like it’s a white exclusivity club.”

“We came from where everyone in pictures and movies (came from),” Minor said, gesturing to images of Marilyn Monroe on his office walls. “That’s the mold, and we haven’t broken that mold since it’s been created. In the drag community, that trickles down.” 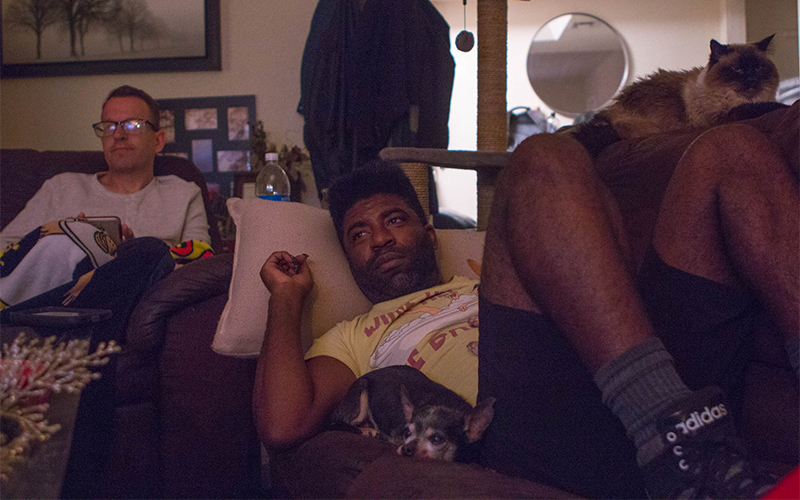 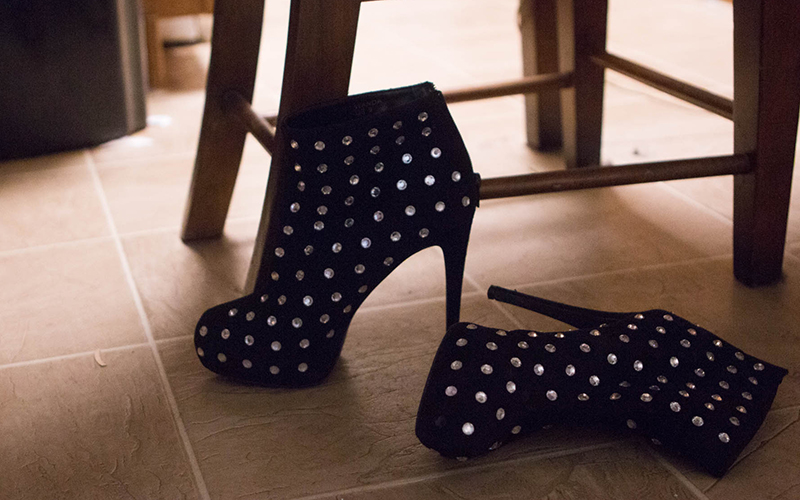 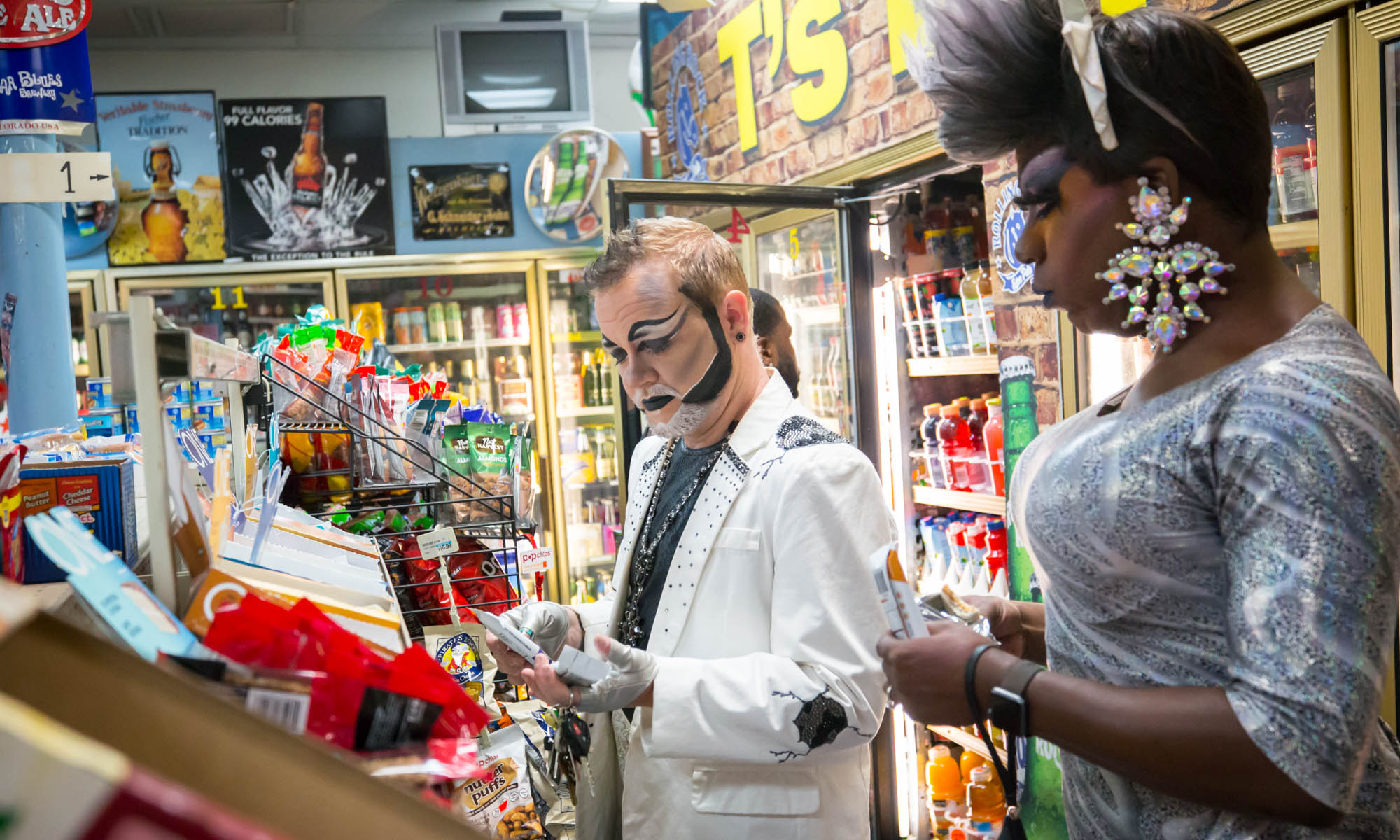 “For a typical drag queen, if you fit in that box in Phoenix, you’re great. If you’re a king and you fit in the box, it’s fine,” said Freddy Prinze Charming, a transgender drag king who has been performing for 15 years in Phoenix. “Anything outside of the box in Phoenix? We’re still learning.”

“It doesn’t matter how you identify as far as your own gender. It’s theater, it’s drama, it’s art.”

At the start of Charming’s career, queens ruled the scene and drag kings were harder to come by. They’ve been a part of the Phoenix drag scene for over a decade, he said.

“There are still times when kings will get the short end of the stick when it comes to show pay or performance slots or things like that,” he said. “Even in a world where men dress as women, it’s still male dominated at the end of the day.” 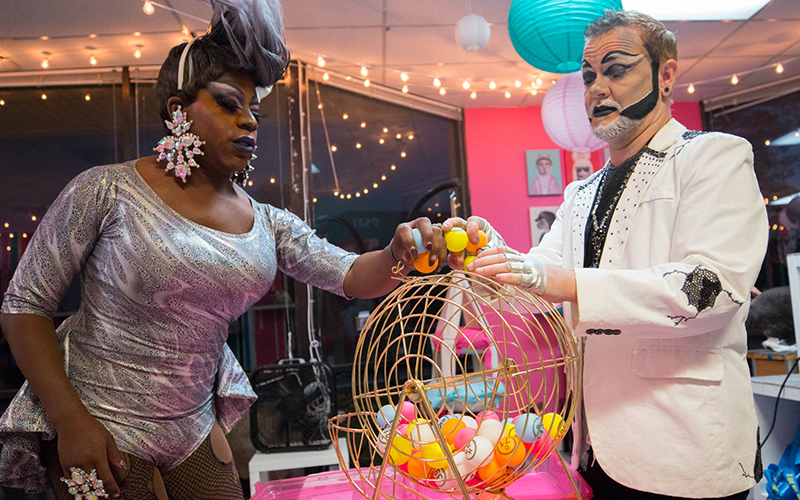 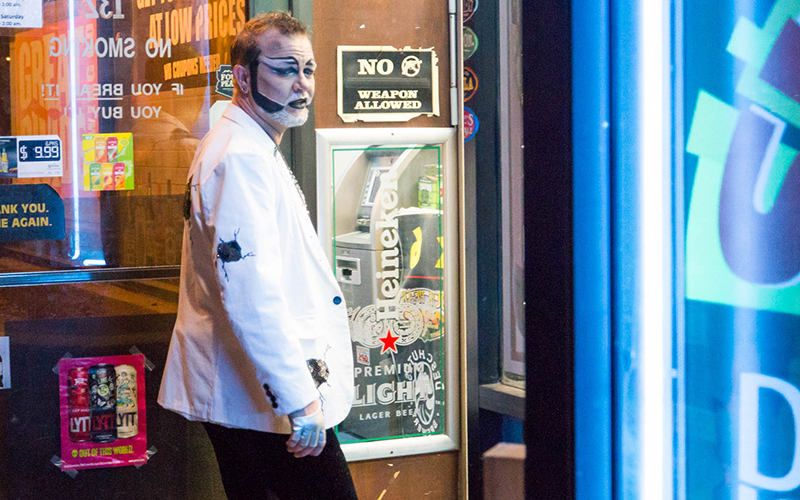 Minor supported Charming throughout his transition. Minor said she has relied just as much on Charming for support in her personal life and career. (Photos by Delia Johnson/Cronkite News)

Drag king Dustin Riot says the audience loves when a performer plays up her sex appeal. “They go wild for it and they eat it up,” he said. “But a king can’t do that. It’s not the same.”

Riot incorporates both male and female genders into his performances. He takes inspiration from queens and mixes it to fit his style, matching his costumes to each song and individual performance.

Click and drag the slider to see Dustin Riot transform.

“I strive to have a masculine energy but still be able to perform as ‘feminine’ as I want,” he said.

“I don’t understand why you can’t have a cloak or a train or jewelry or nails.”

Starting out, Riot felt pressure to be the “masculine person that everyone wanted.” That exploration helped him realize that he could be masculine without acting masculine.

For Riot and other non-binary drag artists, gender doesn’t need to be the cornerstone of their acts. 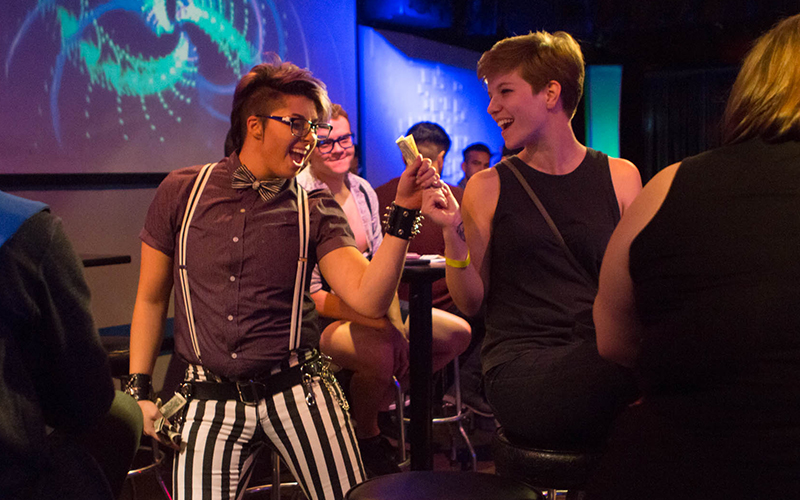 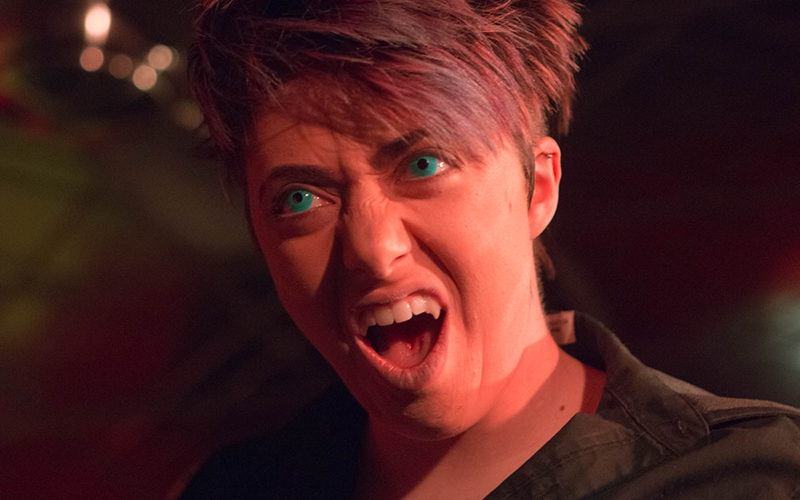 Phoenix’s drag scene has grown to include AFAB (assigned female at birth) performers.

Sassy C. Diaz didn’t know a woman could be a drag queen. “It was actually really interesting figuring out that I could be a femme as opposed to being a king,” she said. Now, five years later, she hopes to empower other female drag performers. 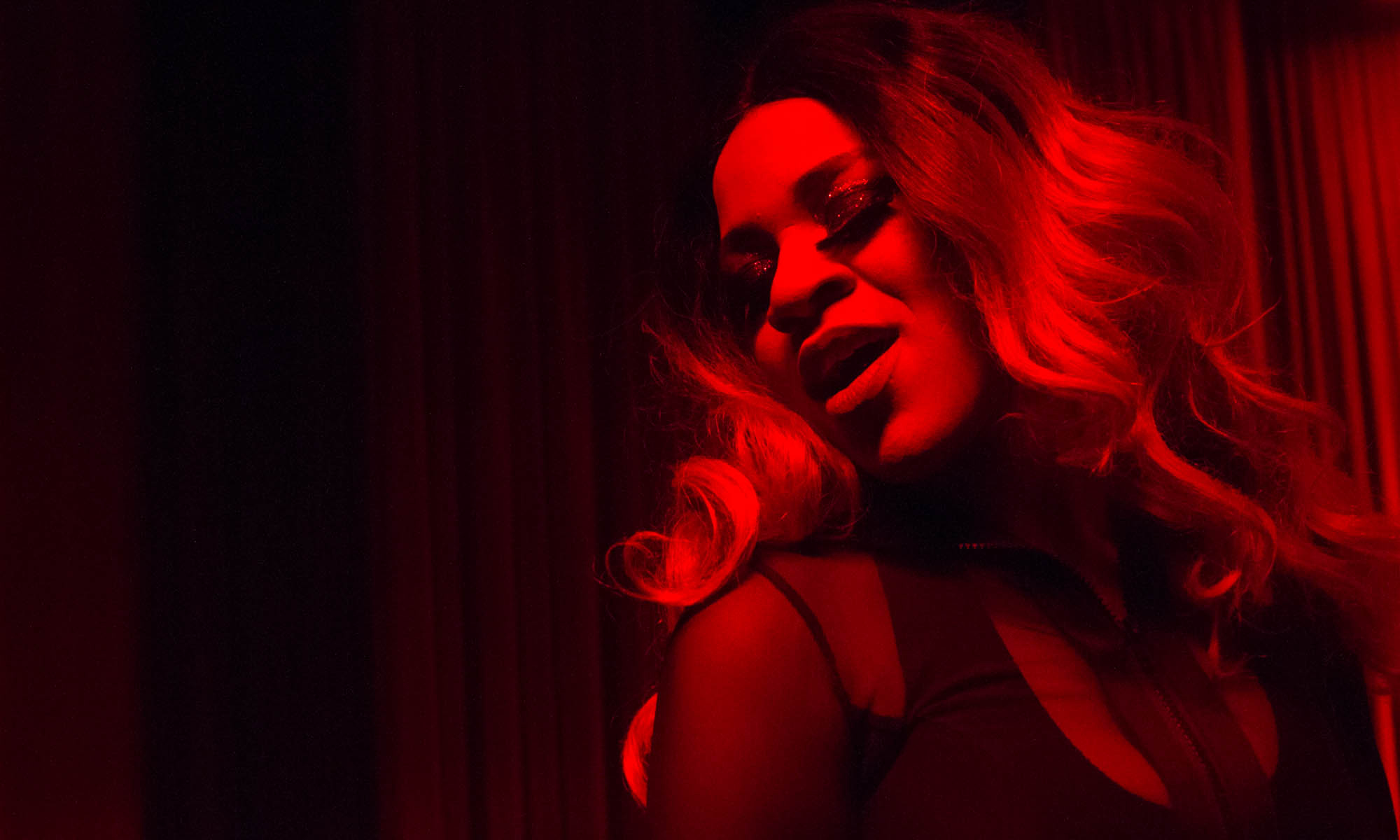 Diaz wants to be judged not for who she is, but on her performances.

“Being a femme of color and trying to fit in to a world of drag that was predominately male and predominantly Caucasian, it’s a little harder when I’m trying to get my point across to not be the angry black girl,” she said.

“It may not be what you’re used to, but it doesn’t take away the validity of what I do.” 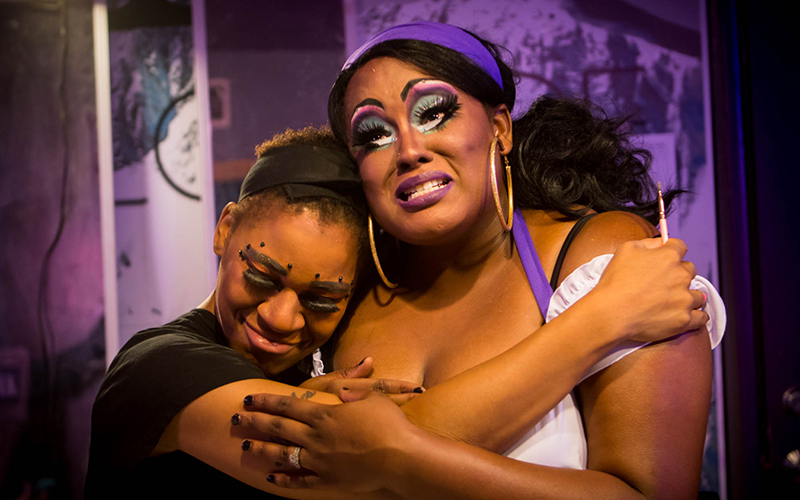 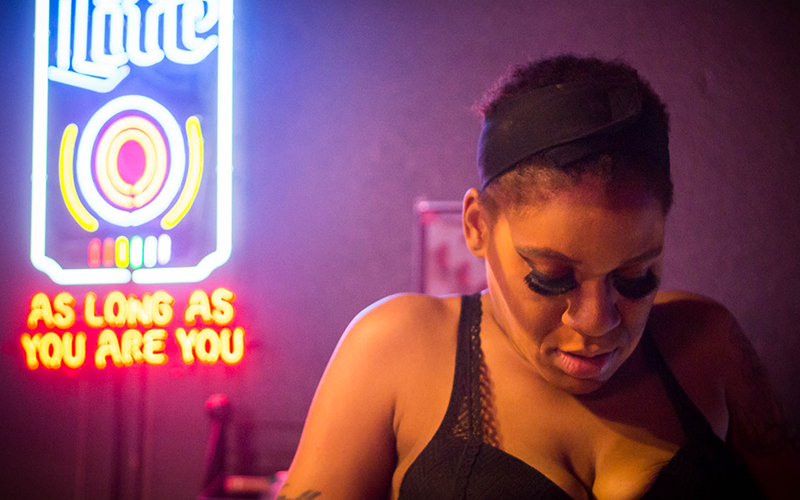 As an AFAB (assigned female at birth) drag performer, Diaz wants to be judged not for who she is, but on her performances. (Photos by Delia Johnson/Cronkite News) 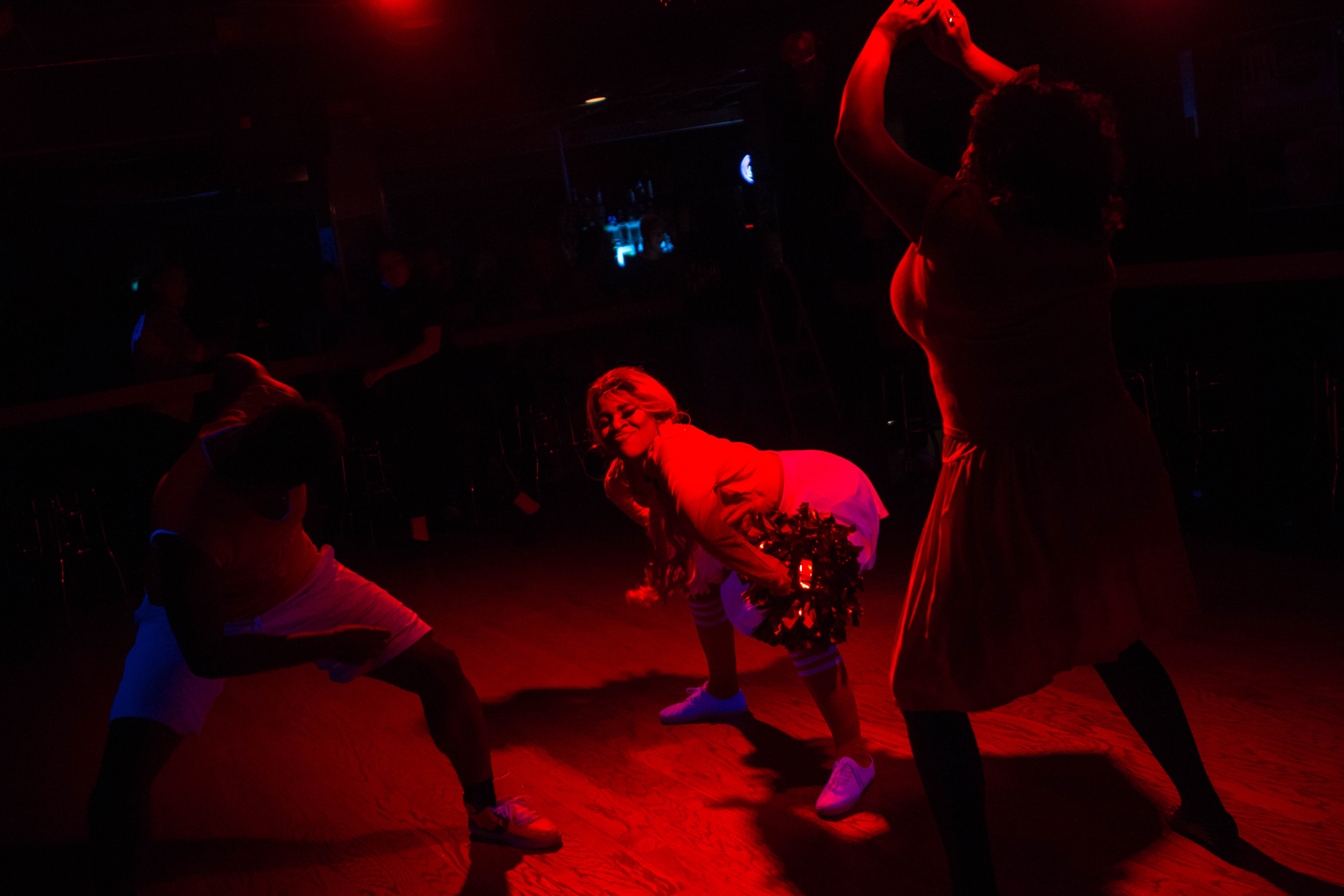 Sassy Diaz, center, twerks on the dance floor after performing in Not Your Momma's Mouse Disney drag show at The Cash in Phoenix. (Photo by Delia Johnson/Cronkite News)

AFAB queen Brii St. James has faced similar criticisms over her gender. There’s a lot of bias toward the original style of drag, she said, but the scene is slowly opening up to new styles.

“Drag evolves, everything evolves, and women can do drag. Your gender shouldn’t define your performance,” she said. 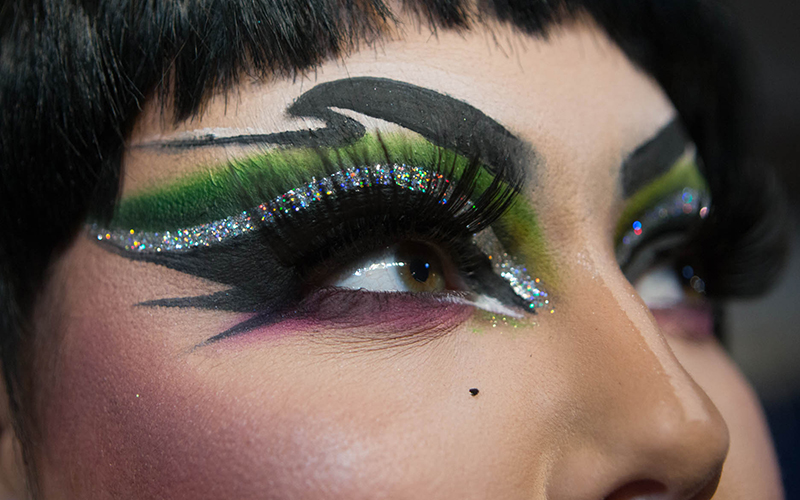 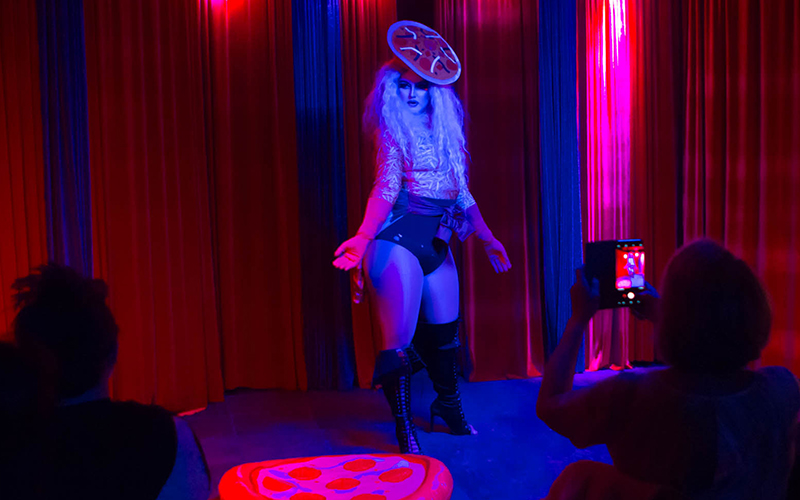 St. James disproves the common misconception that drag is only for men. (Photos by Delia Johnson/Cronkite News)

There are more opportunities for different styles of drag today because the people in charge have evolved artistically, St. James said.

Because members of the LGBTQ community are more likely to develop mental health conditions and die by suicide, according to the National Alliance on Mental Health, she explores these issues in her performances. They offer both empathy and hope for those experiencing hard times. 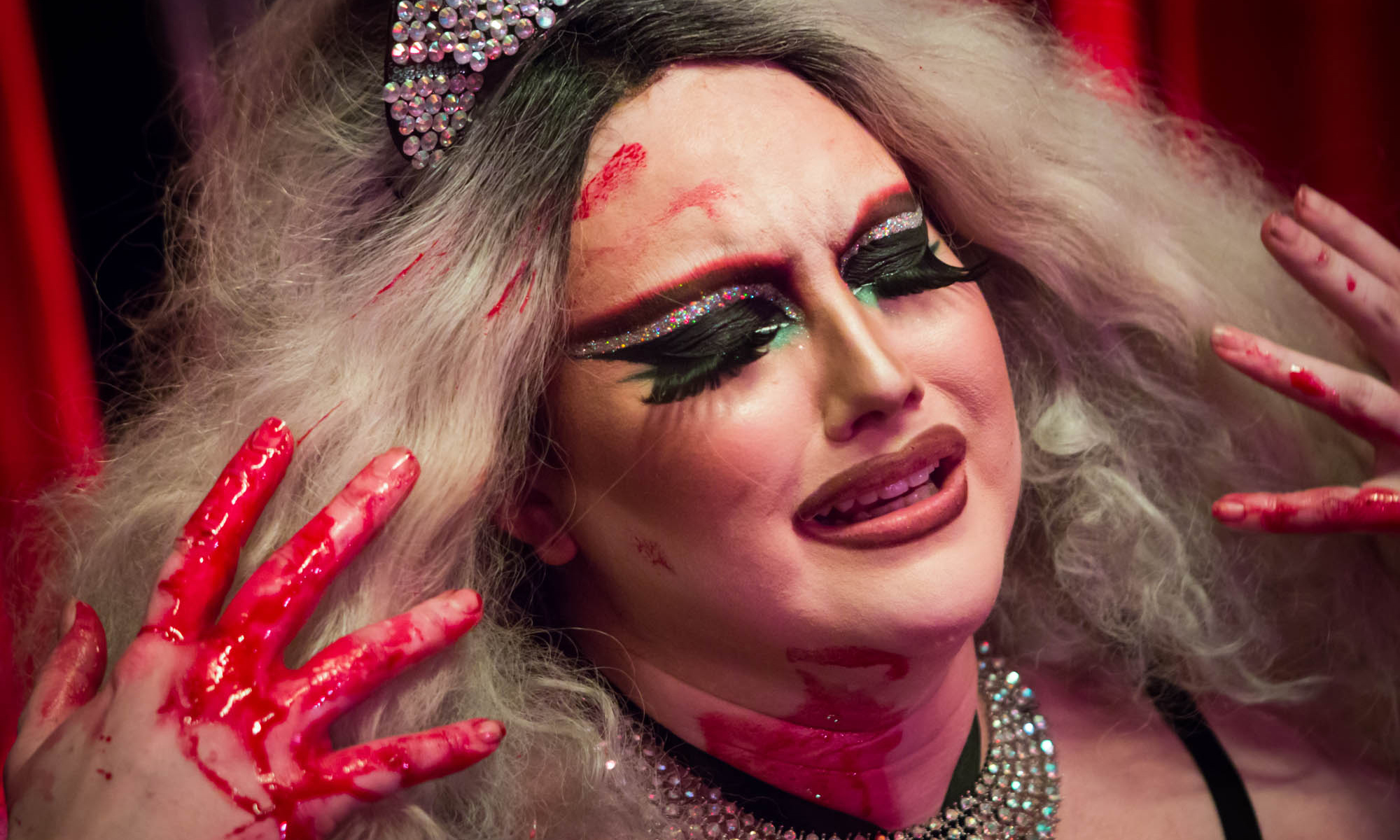 “I’ve had so much more diversity in all of the shows that I’ve done outside of Phoenix, and it’s really inspiring to see,” said Astrud Aurelia, an alternative drag performer who has worked in New York, Los Angeles, Miami, Orlando and Chicago. In those cities, she said, drag includes punk, horror, glam and everything in between. Phoenix’s lack of high art influences is partly to blame for the lack of variety, she said.

“If all you know and all you’re trying to replicate is the drag that you see down the street, then you’re not going to be pushing things forward,” Aurelia said. “Everyone else is going to be zooming right ahead while we’re disconnected in our own little bubble in the middle of the desert.” 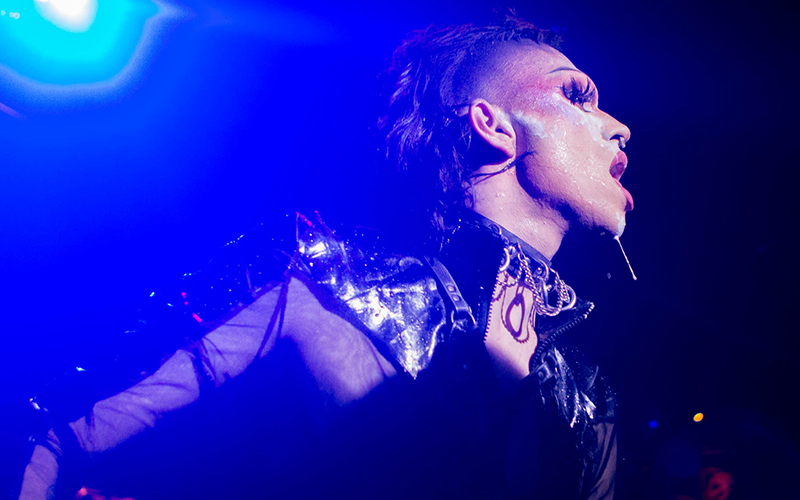 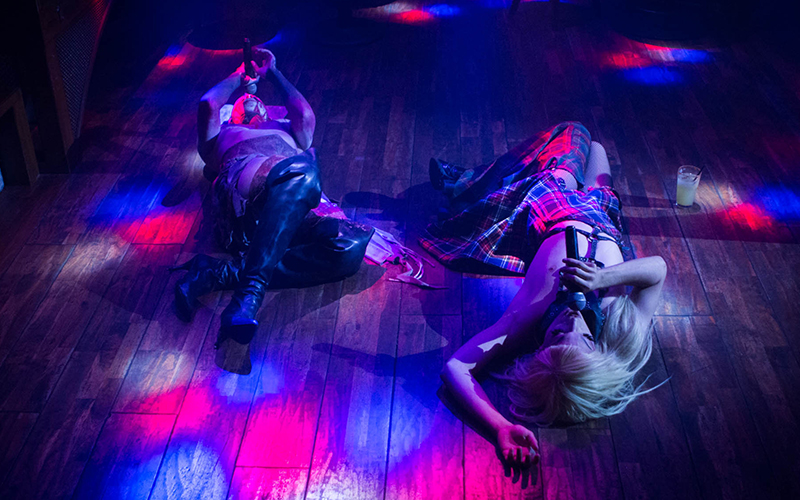 “I don’t really identify as a gender when I do drag, even if I wear (breasts) or something, it’s still not woman to me,” she said. “It’s like a sexless demon.”

Most drag hosts tend to book queens, so unconventional artists have looked to progressive hosts for support.

“The gender-fluid thing means going against a few rules that have been laid in stone with drag for such a long time,” Dahli said. 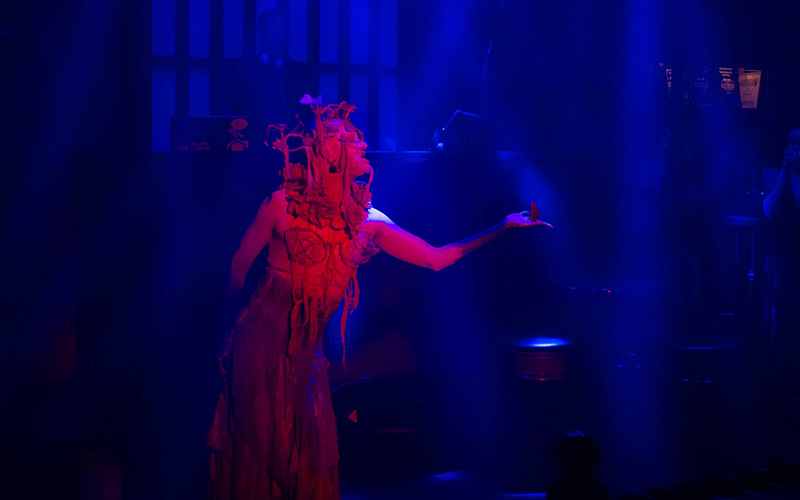 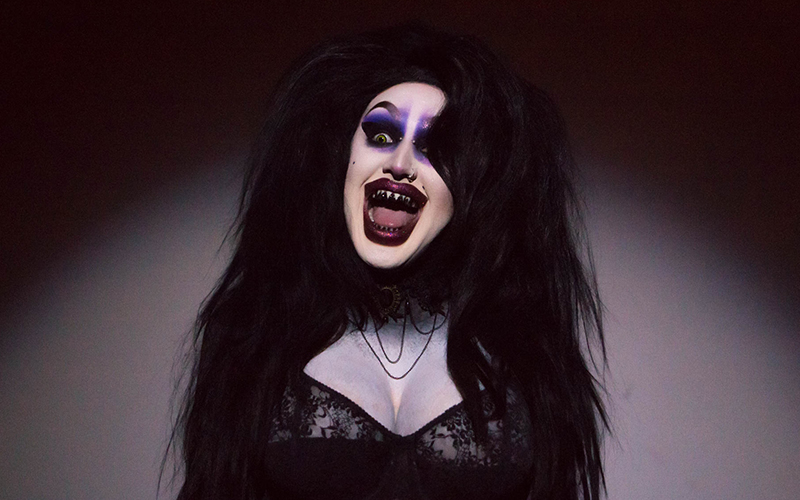 Dahli competed in the reality TV show Boulet Brothers Dragula in 2017. Since then, she has been booked for more shows in Phoenix. (Photos by Delia Johnson/Cronkite News)

Drag show hosts are responsible for booking performers for their shows. “The opportunities for drag performers that aren’t cisgender males are less (because) the men are running the show,” said Benaddiction, a drag queen co-hosts a weekly show called “The Queer Agenda” at Stacy’s @ Melrose in central Phoenix.

“I, personally with my shows, try to consistently bring in a diverse cast,” she said. Acts she has booked include horror, alternative and pageant entertainers, as well as performers of color and queens just getting started.

“It’s our responsibility to provide those opportunities and spaces because there’s so much art out here that hasn’t been seen,” she said. 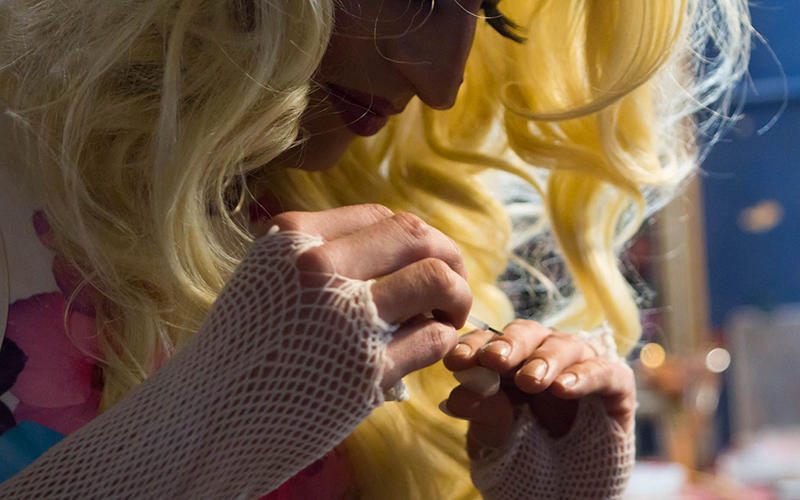 Recognizing that there are fewer opportunities for performers who are not cisgender white males, Benediction books diverse characters for the shows she hosts. (Photos by Delia Johnson/Cronkite News) 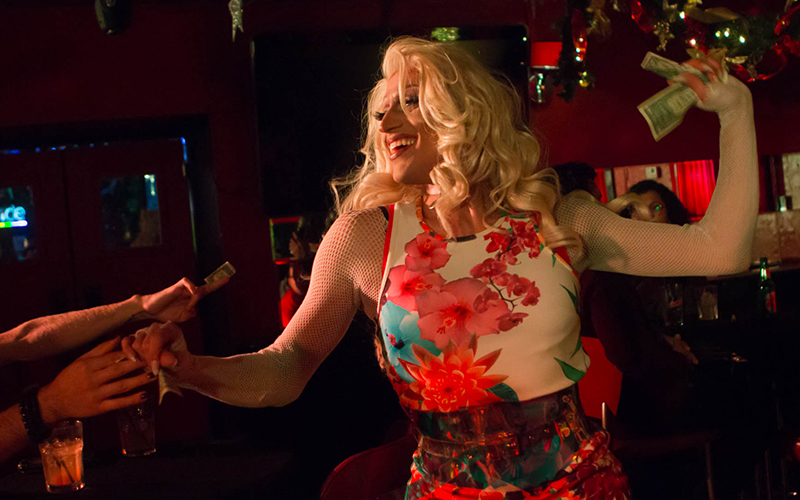 Doja Stevens has been hosting shows for several months after being given the opportunity from a seasoned queen. She doesn’t focus too much on gender or diversity when booking acts, and instead prioritizes talent.

“I don’t try to book people that are the same drag. I do want my show to kind of be a variety show. I named it Mod because I want it to be modern.”

Click and drag the slider to see Doja Stevens transform. 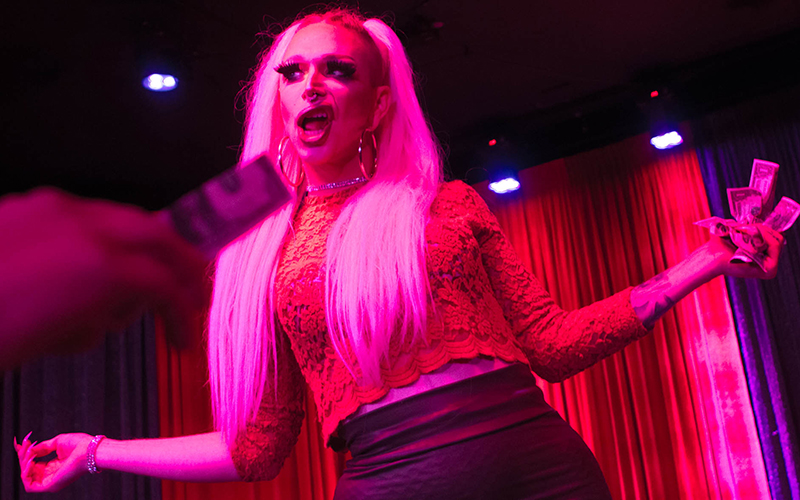 Doja Stevens books a variety of acts for Mod, the show she hosts at Kobalt in central Phoenix. (Photo by Delia Johnson/Cronkite News) 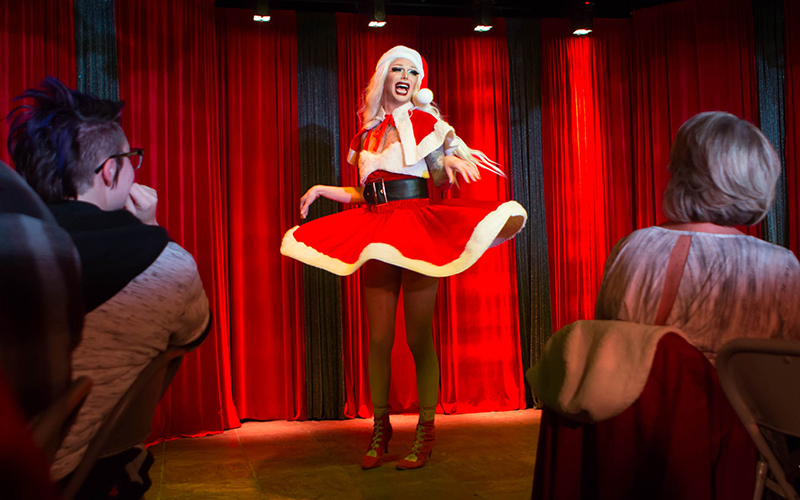 Stevens hosts two shows, Mod and Mugged, which she co-hosts with AFAB queen Brii St. James. Her advice to performers trying to establish themselves is to promote the show they want to be in and invite hosts to see them perform.

“Work for it,” she said. “Some of these new girls do feel this entitlement, and you’re like, ‘You have to prove yourself.'” 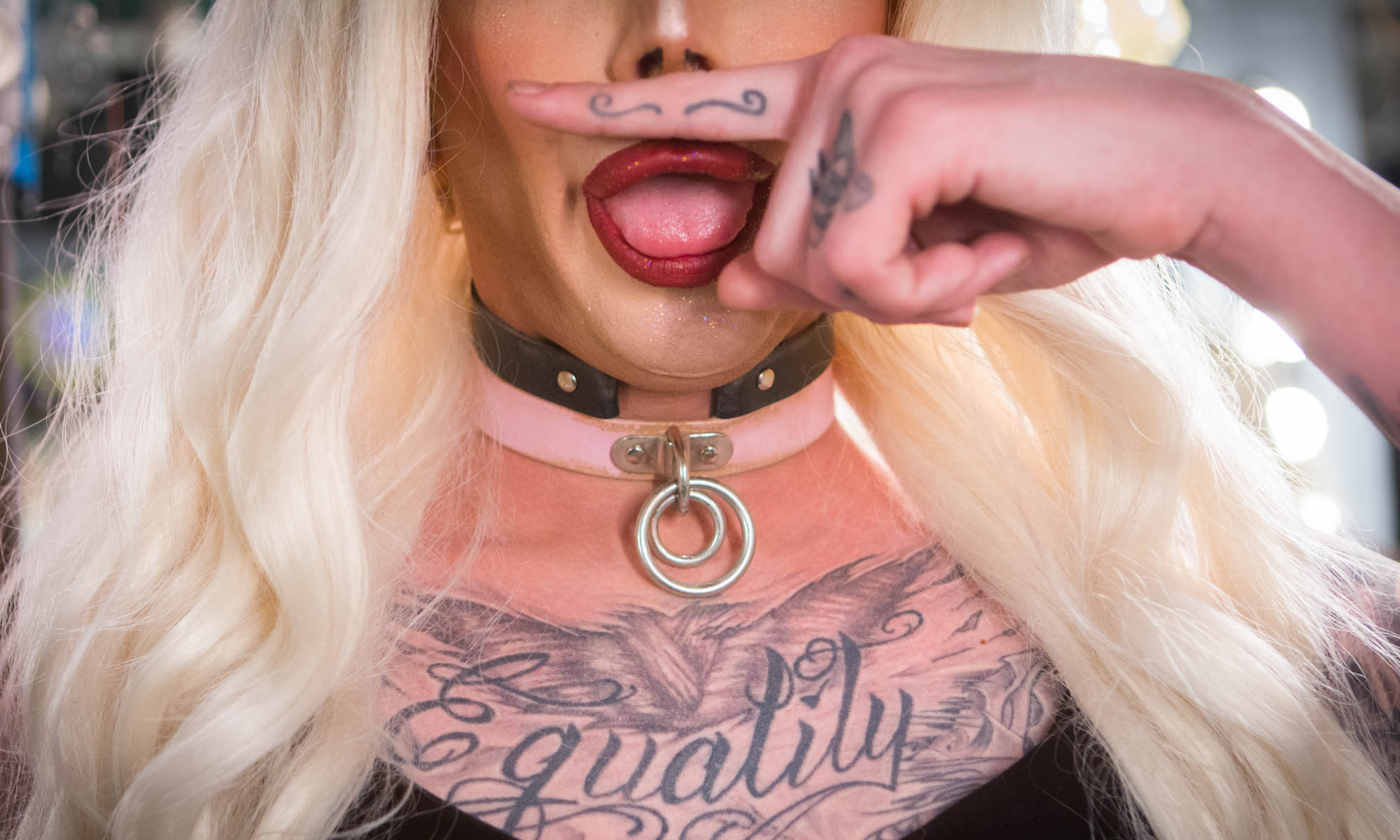