PHOENIX – A recent Arizona State University study has shed new light on antibiotics produced by ants, and the lead author thinks the work could be applied to improving human health.

“What is really fascinating to me is that these ants might actually help save our lives one day,” said Clint Penick, lead author of the study and assistant research professor in the Biomimicry Center at ASU. “There are a lot of reasons to protect these habitats. And then there is also a reason to look at even the lowly ant. They might save us one day.”

The study, which was published last year in the Royal Society Open Science, tested the antimicrobial properties associated with 20 ant species. It found some ant species use powerful antimicrobial agents, but 40% of the species tested did not appear to produce antibiotics at all.

Arizona has more species of ants than any other state, so it’s an ideal location to study them, Penick said, adding there are good reasons, including the ants’ longevity, to do so.

That requires adaptation to such challenges as disease. 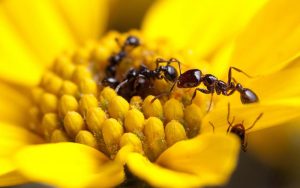 “We think that most of the species have found ways to effectively deal with pathogens, but, just like humans, new diseases arise and new colonies can get hit harder than others, and that is probably their Number 1 threat,” Penick said.

Ants live in large colonies and have high interaction rates, much like people.

“It’s just like humans in cities where illness spreads,” Penick said. “When someone gets a cold, and they sneeze on a train, they can send that cold to hundreds if not thousands of others.”

“The major goal of our study was to figure out if we can narrow down what species would be the most interesting to look at for future antibiotics,” he said.

Penick uses an aspirator – essentially a vacuum activated by his breath – to collect ants. He sucks them up through a nozzle, which has a screen, and they’re trapped in a small container.

“What we would do is take the ants that we had collected outside and soak them in alcohol overnight,” he said. “We would then remove the alcohol, dry it down, and suspend it basically in bacteria food. Then we would add staphylococcus epidermis, which is a common bacterium. It’s on human skin; all of us probably have it on our skin right now.”

Penick found that some of the ants produce active compounds that kill bacteria. And this study is the first step in finding a new antibiotic.

But it’s a long process.

Researchers hope to use different kinds of bacteria on ant species, examine what produces the antibiotic effects and dig deeper into how ants defend themselves against bacterial pathogens, according to ASU Now.