Because homes on the Navajo Reservation are so far apart, hooking up one home to the grid costs on average of $40,000. (Photo by Laurel Morales/KJZZ) 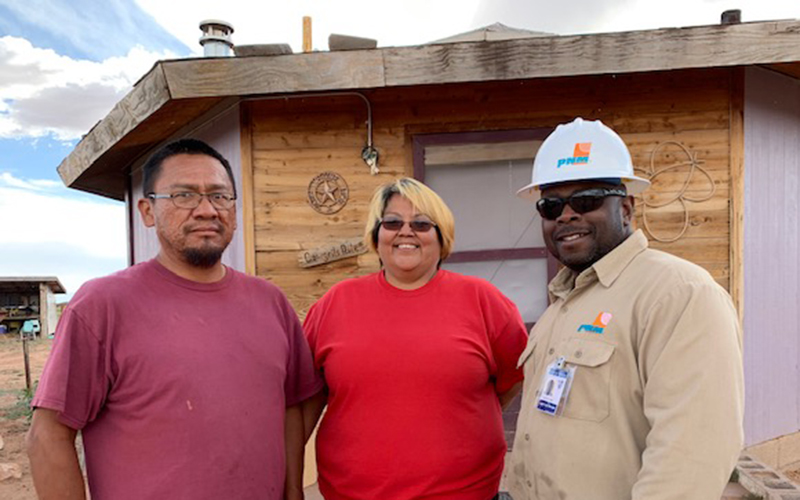 Christopher and Neda Billie pose with Brian Cooper of P&M Electric in Santa Fe, part of the crew that hooked up their home. P&M also donated a refrigerator to the family. (Photo by Laurel Morales/KJZZ)

DILKON – Neda Billie has been waiting to turn on the lights for 15 years.

“We’ve been living off of those propane lanterns,” Billie said. “Now we don’t have to have flashlights everywhere. All the kids have a flashlight, so when they get up in the middle of the night, like to use the restroom, they have a flashlight to go to (the outhouse).”

Billie, her husband and their five kids live in a tiny one-room hogan, a traditional Navajo dwelling. The family’s three sheep graze on sagebrush that carpets the rolling hills around Dilkon.

They watched two workers in a cherry picker hook up the last electrical wire to their home. Billie said they’ve gone through too many generators to count.

“My two boys, they have really bad allergies, and they have asthma, so sometimes they need the nebulizer, so we usually go to my mom’s house, travel in the middle of the night over there back and forth,” Billie said.

The Billies are not alone. About one in 10 Navajos live without electricity. And as many as 40 percent of the tribe have to haul their water and use outdoor toilets. A poll of rural Americans conducted by NPR, the Robert Wood Johnson Foundation and the Harvard T.H. Chan School of Public Health found more than a quarter of Native Americans have had problems with access to electricity, water and the internet.

Manley Begay Jr., a professor of applied indigenous studies at Northern Arizona University, said the true numbers probably are even higher. Begay, who is Navajo, said electricity provides more than just light. With electricity, a family can pump water, charge their cellphones, store food – even find and keep a job.

“Electricity itself provides a tremendous amount of convenience and having access to the world at large,” he said. “You can just imagine if you were to fill out an application for a job, you do it online and you send it in. Or you’re Googling for information; if you don’t have electricity, you’re in trouble.”

Begay said he saw a strange sight recently when he pulled into a hotel parking lot in Window Rock, the Navajo capital, where a group of teenagers were sitting in their cars, the interior lights on.

Outside the Billies’ home, Neda and husband Christopher waited patiently for the crew to finish the hookup. Brian Cooper from PNM Electric, a Santa Fe utility, had an update.

“We’ll get a meter going and you should have electricity,” Cooper said. “Can’t wait to see the real smile here in a minute. Don’t cover it up, I want to see it. That’s what joy looks like.”

PNM Electric also donated a refrigerator to the family.

The New Mexico utility was among 21 from around the country that volunteered their crews this spring to provide power under an initiative called Light Up Navajo, led by the Navajo Tribal Utility Authority and the nonprofit American Public Power Association. Workers came from near (Utah, New Mexico and California) and far (Ohio, Massachusetts and Arkansas).

Homes on the 27,000-acre Navajo Nation are so spread out that connecting a single home to the power grid costs an average of $40,000. And among the 157,000 Navajos living on the reservation, about half are unemployed. So the Navajo utility can’t raise rates to energize all those homes.

According to the American Public Power Association, those 15,000 Navajo homes represent 75% of all unelectrified households in the United States.

“I had no idea that there were people still in 2019 without power,” Cooper said.

Finally, after waiting for so many years, the Billies watched the foreman turn on the meter behind their house and snap the cover shut. Neda then ran inside to flip the switch.

Now the family will wait and pray for running water and connection to the internet.