Freddie Yazzie puts pictures of local legends in his school bus, which he calls the Legacy of Excellence. “When I think about it, I’m part of their education,” Yazzie said. (Photo by Jake Goodrick/Cronkite News)

GANADO – At precisely 6:55 each school day morning, Freddie Yazzie puts his bus in gear and cautiously pulls out of the bus yard beside the Ganado Unified School District main campus.

For 26 years, Yazzie has driven school buses for this quiet Navajo community, and in that time, he shaped his role beyond that of a chauffeur for the elementary, middle and high school students on his route.

As Yazzie sees it, he changes lives.

From the outside, his school bus, No. 153, looks similar to any you’re likely to see anywhere during the school year: Yellow paint, a backdoor emergency exit, sliding windows and an engine rumble that – when combined with the faint smell of exhaust – conjure memories of nervous first days and pure nostalgia.

But inside, his bus is one of a kind.

On the ceiling, enlarged photos and posters of Ganado High School alumni smile down on current students who ride with Yazzie to and from school and athletic events.

Photos of top athletes are flush against those of top scholars, and their black Sharpie messages of inspiration and wisdom from the past shine down on kids with the potential to be on the ceiling themselves one day.

Yazzie essentially curated a hall of fame of sorts in his school bus, which he calls the Legacy of Excellence.

It began about 2006, with a single photograph a student gave him. Yazzie placed the image on the side left of the driver’s seat – and then an idea came.

“It kind of snapped,” he said. “It snapped, and I said, ‘Whoa, what if I get some of my former students to send me pictures and to put them up there to where they can inspire some of these little ones?’ ”

Yazzie reached out to former students and steadily added to his gallery of local legends he has gotten to know during his time as a bus driver for Ganado.

“If you look up on the top of this bus, you’re looking at them all the way down,” Yazzie said. “I mean these kids are role models.”

Pictures of students from the 1990s are among pictures from the 2000s and the past decade. Each of the photos includes a message that speaks directly to the kids.

One is a teacher, another a volleyball star. Some are known for their rodeo expertise, and others have gone on to earn doctorate degrees. The photos and blurbs are there so current students can learn about those who came before them, who were from where they are from and who once sat where they sit now.

What he created is his own form of storytelling, a way to keep the elder generations connected to the youth. A way to channel the impact of past students into a force that can positively affect the students in search of role models in the present.

“It is an honor that my picture is being put on that bus because Freddie is putting me in a category with a lot of other people who made a really good impact on the community and just by me living my life, I hope I’m doing the same,” said Anthony Lemus, one of Yazzie’s former students.

Lemus graduated from Ganado in 2017 and spent all four years of his high school career running cross country and track. He and his teams rode along with Yazzie to and from meets on the Legacy of Excellence, and drew inspiration from the onlookers above them.

“It’s a really big need,” Lemus said. “Especially where we grew up, in the city of Ganado, there’s not much to do around there. So, you can get in to drugs, or video games, or stuff that’s, like, really unproductive, but everybody on that bus, they went past that.”

Ganado is a small community with strong culture and history, but by virtue of its limited resources and its rural location, opportunities can be limited. Sports and academic success serve as one of the few outlets for students to transcend their environment and prepare themselves for future possibilities. 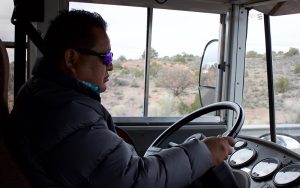 Like Lemus, JaeLynn Curley and her athletic career at Ganado is enshrined on the Legacy of Excellence.

“It’s big,” JaeLynn Curley said. “It is a one of a kind deal that I don’t see anywhere else. Any other schools, you don’t see that. That’s his own thing, that’s what he did, that’s his decision and it’s really impacting a lot.”

As a three-sport athlete, Curley rode Yazzie’s bus to and from athletic events during her years in middle school and high school. Each time on the bus, she looked up at the poster of Gabrielle Curtis that hung above her, and found a kindred spirit.

Curtis led Ganado to the 3A State Championship – the school’s one and only women’s basketball title – and her talents led her from the Navajo Reservation to Northwest Missouri State University.

Curley graduated from Ganado in 2017 and is following a path she didn’t know existed until someone from her community, Curtis – via Yazzie – showed her the way. Curley is now an athlete on the basketball team at East Los Angeles College, a long way from Ganado.

“After seeing that, I was like ‘OK, it is possible,'” Curley said. “I was so young that I didn’t understand the whole process. I thought you just play basketball and then that’s it after high school and then you go work. That’s basically what I thought. But then after seeing that I went ‘Oh, OK, basketball and school go together. I can do that.’ ”

Like Curley and Lemus, Brittany Becenti’s achievements are also a part of the Legacy of Excellence.

Becenti, who graduated from Ganado in 2009, then served as the manager for the basketball team and rode Yazzie’s bus to and from team events for three years while in high school. She rode the bus around the time he began hanging photos and later, as the 2011-12 International Indian Finals Rodeo Queen, had her portrait added to the collection.

“It’s nice to see the people that went to the same school – I know the environment – were able to be successful and made it out the same situation,” Becenti said. “It’s very rural. Opportunities are limited to what is offered to us and we don’t have a lot of access to things that are in the city.”

For years, Yazzie elevated his platform as a bus driver beyond the expectations typically associated with his job title by inspiring students and opening their eyes to opportunities they may not have been exposed to otherwise

He is currently retirement eligible but not ready to give up his route just yet. All around him, the next generation of Ganado students is growing older each day. His bus is a historical document on wheels. Someone has to be there to witness, to tell their stories.

As more local legends gain the honor of permanence in the Legacy of Excellence, more local students, inspired by those before them, are building legacies of their own.

“And I always say that these kids were sitting here one time or another, little ones, but look at what they’ve become,” Yazzie said. “Look what they did. Look what they accomplished. Never giving up. And so that’s my message to them.”

With that message, the cycle continues on. Kids receive inspiration that pushes them to become adults who return the favor to the next generation of children who sit where they once sat. So on and so forth. The cycle is self-contained inside of the Legacy of Excellence, continuously in motion like the bulky, rubber tires that Yazzie guides through the rural Ganado roads each day.